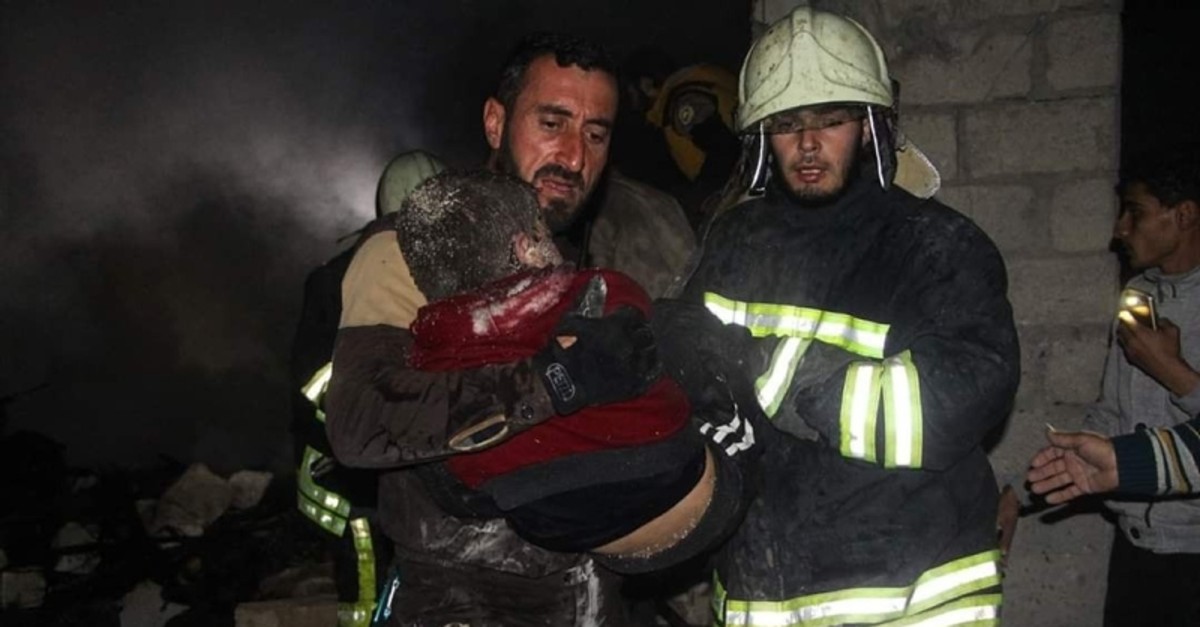 Two civilians were killed and 19 were injured by Russian airstrikes targeting a refugee camp in Syria's Idlib, while the Syrian regime attacked an area in the same province with an internationally-banned weapon in violation of the Sochi agreement reached by Turkey and Russia to preserve the ceasefire in Idlib.

Local sources reported that the fighter aircrafts belonging to Russian forces targeted a refugee camp near the Kafar Amim village, east of the Saraqib district, situated inside the Idlib de-escalation zone.

"Ae Russian SU 34 fighter aircraft took off from the Hmeimim Air Base (in Syria's Latakia province) and held attacks from midnight to around 4 a.m." an observatory belonging to Syrian opposition forces said on social media.

Meanwhile, regime forces also targeted the civilians in the de-escalation zone in attacks on the Temaniye neighborhood of Idlib with internationally-banned white phosphorus weapons.

"The attack was carried out twice. In both of them, some 40 bombs loaded with white phosphorus were dropped," Haj Yousuf said, adding his group does not have any information on casualties right now.

The use of white phosphorus, which can be clearly seen in the footage obtained by AA, is forbidden under international law.

Phosphorus, which poisons the person when inhaled, causes major damage to the brain and lungs and can lead to death.

The areas targeted by bombs were mostly evacuated due to intensified regime attacks in the region. It is assessed that the bombing may have caused no casualties.

The regime last used white phosphorus bombs in March of 2018 in Eastern Ghouta.

The Sochi agreement was reached on Sept. 17 by President Recep Tayyip Erdoğan and his Russian counterpart Vladimir Putin. According to the agreement, the ceasefire in the Idlib region will be preserved, heavy weaponry will be banned and radicals will withdraw from the region. Prior to the agreement, the Assad regime was signaling a grand offensive toward Idlib, which is the last stronghold of the opposition, sparking deep fears in the international community of a new humanitarian crisis.

In case of a crisis, a new refugee crisis is not only a concern for Turkey but would also have implications for Europe. It has been estimated that around 700,000 people may arrive in Turkey, where they might attempt to go to Europe next.