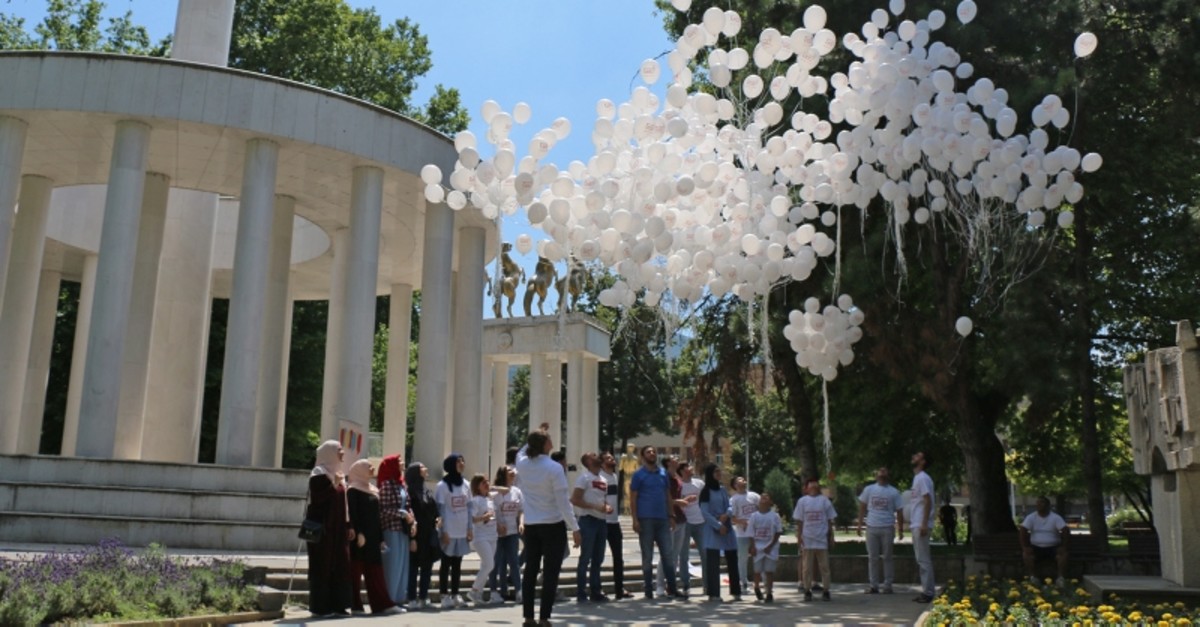 Hundreds of people gathered Saturday in 17 different cities across the world to protest Bashar Assad regime's recent atrocities and airstrikes targeting civilians in Syria's Idlib, releasing balloons to the air at the same time in each country.

During the event, initiated by a platform called "We Are The Love," people released balloons at the same time around the world.

In Turkey, participants gathered in Sıhhiye Abdi İpekçi Park in the capital Ankara

Speaking in Ankara on behalf of the platform, Talha Keskin said that houses, hospitals, and schools are bombed every day in Idlib and civilians are stranded in besieged areas, adding "They can't escape or have a place to hide from the bombs."

Saying that the brutal war in Idlib must be stopped and the deliberate bombing of civilians, schools, and hospitals must be stopped as well, Keskin noted: "It must be guaranteed that all those responsible for war crimes using chemical weapons and rape as war weapons will be accountable to justice. Barriers to humanitarian assistance should be removed to alleviate the suffering of civilians in and out of Idlib, and Syria's peace, stability, and integrity must be guaranteed."

Citing Ursula Mueller, the assistant UN secretary general, who said, "Millions of battered and beleaguered children, women and men are counting upon the international community to stop one of the worst tragedies in modern recent history from unfolding," Keskin said innocents are stuck in the enclave "with no safe way out."

He added that all the people who came together across the globe are calling on the international community to stop the violence in Idlib, and also to end "deliberate" aerial bombardment of civilians and public buildings.

He said the group is also urging accountability for all individuals and groups suspected of war crimes and crimes against humanity through the use of chemical weapons and rape as a weapon of war in Syria.

He also called for the lifting of all obstacles to humanitarian aid supplies reaching civilians in and outside Idlib.

There is also a campaign on social media with the hashtag #WeAreTheLove, aiming to raise awareness for the situation in Idlib.

The Idlib region is supposed to be protected by a months-old buffer zone deal between Turkey and Russia. That region includes most of Idlib province as well as adjacent parts of Latakia, Hama and Aleppo governorates.

Rescuers say the major aerial campaign that Moscow has thrown its weight behind since it was launched in earnest at the end of April has killed over 1,500 people with more than half of the death toll civilians.

Residents and local and international aid agencies that support the rebel-held areas say the sustained campaign that has bombed schools and knocked down medical centers was to smash the spirit of civilians in opposition areas. Russia and the Assad regime deny allegations of indiscriminate bombing of civilian areas or a campaign to paralyze everyday life in opposition-held areas.

More than 300,000 people have fled the frontlines to the safety of areas near the border with Turkey, U.N. and aid agencies say.

Analysts predict the regime will continue to chip away at the region but say it is unlikely to unleash a major assault.

Syria's war has killed more than 370,000 people and displaced millions since it started in 2011 with the brutal repression of anti-government protests.