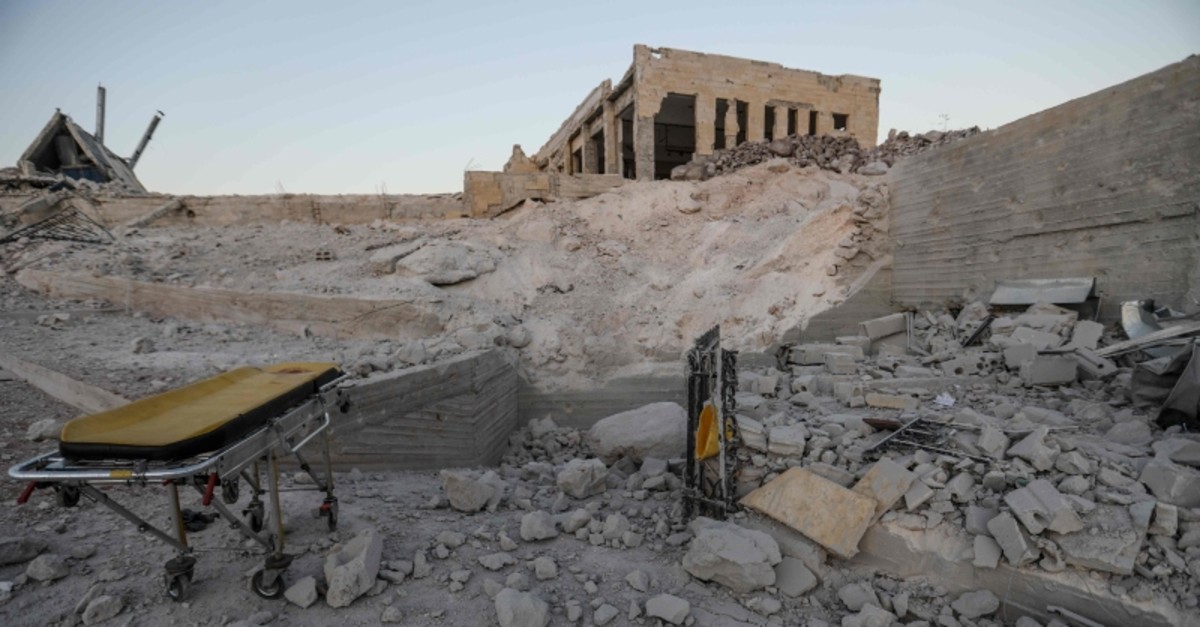 A picture taken on July 4, 2019 shows damage at the entrance of a hospital following a reported airstrike on the village of Kafr Nabl, in the southern Idlib province (AFP Photo)
by Compiled from Wire Services Jul 06, 2019 10:27 am

At least 19 civilians were killed and scores injured in attacks by Syrian regime forces and Russia on de-escalation zones in northern Syria, said sources with the White Helmets civil defense agency on Saturday.

A woman was also killed early Saturday in regime rocket fire on the outskirts of the town of Khan Sheikhoun in the south of the province, the Britain-based war monitor said.

Idlib, a region of some three million people, many of whom fled former opposition-held areas retaken by the regime, is the last major bastion of opposition to the Russia-backed Assad regime after eight years of civil war.

The region is administered by Syria's former Al-Qaida affiliate Hayat Tahrir al-Sham, but other terrorist and opposition groups are also present.

Idlib is supposed to be protected from a major regime assault by a September deal between Moscow and Ankara, but Damascus and its Russian ally have ramped up their deadly bombardment of the region since late April.

More than 520 civilians have been killed since then, according to the Observatory.

The United Nations says 25 health facilities in the region have been hit, the latest including the second attack in two months on an underground hospital in the town of Kafranbel on Thursday.

"The attacks happened despite the fact that the coordinates of this hospital had previously been shared with the parties to the conflict in a deliberate, carefully planned effort to prevent any attacks on it," a U.N. official said on Friday.

"I am horrified by the ongoing attacks on civilian areas and civilian infrastructure as the conflict in northwest Syria continues," said Mark Cutts, UN deputy regional humanitarian coordinator for the Syrian crisis.

Syria's war has killed more than 370,000 people and displaced millions since it started in 2011 with a brutal crackdown on anti-government protests.