US calls on Germany to send troops to Syria, aid YPG terrorist group 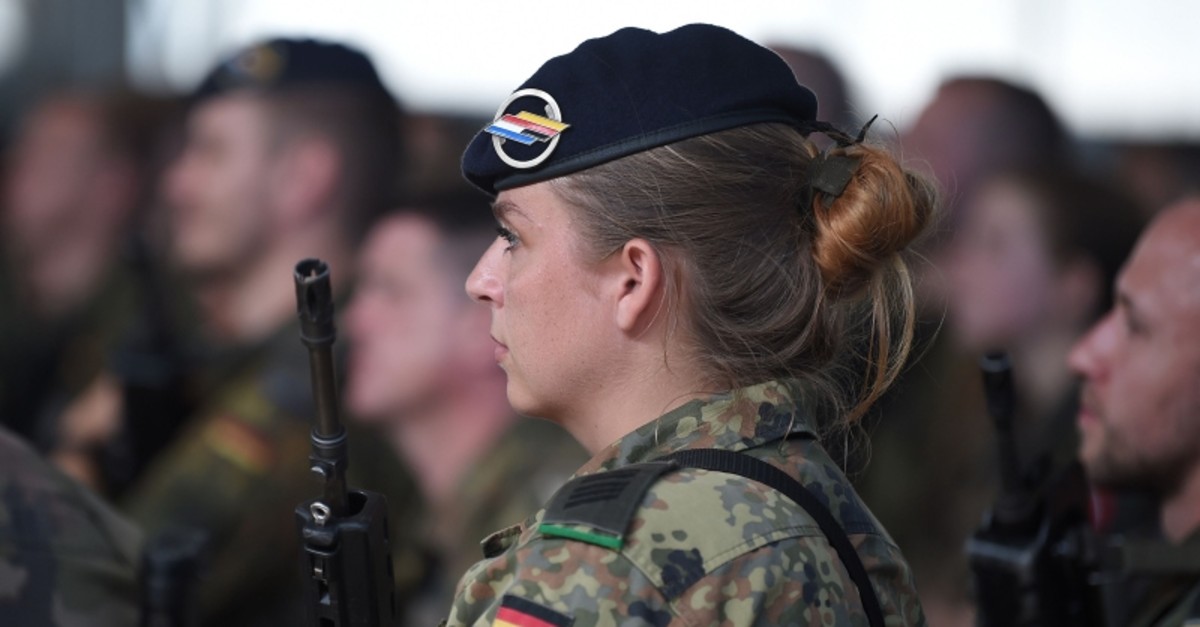 A soldier takes part in a military rehearsal with other members of the Franco-German Brigade in Meyenheim, Germany, July 2, 2019. (AFP Photo)
by Daily Sabah with Wires Jul 07, 2019 3:19 pm

The United States has called on Germany to support the fight against the remnants of Daesh by sending ground troops to support the Syrian Democratic Forces (SDF), which is controlled by the People's Protection Units (YPG) terror group, in northeastern Syria. James Jeffrey, U.S. special envoy for Syria and the anti-Daesh coalition, expressed his demands for the German government to send training forces, logistical experts and technical workers from the Bundeswehr.

"We want ground troops from Germany to partly replace our soldiers," Jeffrey told German media service dpa and the German weekly Welt am Sonntag. He said he expects an answer before the end of the month. The U.S.' Syria policy, especially its military support for YPG terrorists, has been a cause of tension between Ankara and Washington. Ankara argues that one terrorist group cannot be used to fight another. Turkey sees the YPG as an extension of the PKK, which has claimed the lives of more than 40,000 people in its 30-year terror campaign against Turkey. The U.S., however, while listing the PKK as a terrorist group, is maintaining its steadfast military support for the terrorist organization, by providing truckloads of military supplies and military training, under the pretext of fighting Daesh at the expense of losing its NATO ally.

In December, U.S. President Donald Trump announced that Washington would pull out its troops from Syria, saying that Daesh has been defeated. The withdrawal decision was quickly also interpreted as an intention to halt U.S. support for the YPG. Yet, a growing number of inconsistent statements from the White House indicate that the cooperation still remains an issue of concern. To reduce tensions, Turkey and the U.S. agreed on a road map in June 2018 foreseeing the withdrawal of the YPG from Manbij and installing joint Turkish-American patrols, which began in November. However, the process has been sluggish as the terrorist group was still present in the city despite the three-month timetable set for implementing the deal.

Ankara has been pointing out that it will not allow the YPG to strengthen its grip in Syria. Turkey is also prepared to launch an operation east of the Euphrates to eliminate the YPG. However, following the U.S. decision to withdraw from Syria, Ankara decided to put the operation on hold for some time. While establishing a safe zone would eliminate some of Turkey's concerns, the presence of the YPG in Syria and its plan to form a quasi-state will continue to present a threat to the country.

Until now, Turkey and the U.S. did not discuss in detail where the safe zone would be and what would happen to the YPG terrorists. Turkish officials had been waiting for Washington to clarify what they meant by the 20-mile-deep safe zone. As Turkey was waiting for the U.S. to take more concrete steps, Turkey carried out two cross-border operations west of the Euphrates River, Operation Euphrates Shield launched in August 2016 and Operation Olive Branch in January 2018, to drive terrorist groups, including the YPG and Daesh, from its borders.

In March, SDF forces including YPG terrorists captured the last bastion of Daesh in Syria, though Daesh has remained active underground.

Trump backtracked on his decision to pull all 2,000 U.S. soldiers out of northeastern Syria and said that some 400 will stay to help stabilize the region, which straddles the border between Iraq and Syria.

The U.S. has since been working to secure more support from the 80 allies in the anti-Daesh coalition, including Germany, as U.S. forces begin to draw down.

"We are looking here and among the other coalition partners for volunteers to participate," the special envoy said after talks in Berlin on Friday. "We believe we will be successful in the end."

A leading politician in Chancellor Angela Merkel's Christian Democratic Party has called for Germany to carefully look into a U.S. request for Germany to support the fight against Daesh with ground troops in Syria.

The request shouldn't be "rejected in a knee-jerk reaction," said Johann Wadephul, deputy leader of the parliamentary caucus of the Christian Democratic Union (CDU) and Christian Social Union (CSU).

Wadephul, who is considered a possible successor to German Defense Minister Ursula von der Leyen, should she go to Brussels to become the new European Commission president, argued in favor of continuing Germany's deployment of reconnaissance planes there. "In this region, it's about our security and not American [security]," he told dpa on Sunday. Germany has been supporting the anti-Daesh coalition from outside the country, supplying Tornado reconnaissance planes and a refueling plane out of Jordan, as well as training forces in Iraq. The mission was supposed to end Oct. 31, but Foreign Minister Heiko Maas made clear during an Iraq visit last month that it could be extended. Germany's parliament, which has to approve any extension, will take up the matter in September at the earliest.

Meanwhile, Iraq's security and paramilitary forces have begun a military operation along the border with Syria aiming to clear the area of Daesh terrorists.

The Iraqi military said the operation that began at sunrise yesterday is being carried out by Iraqi troops and members of the Popular Mobilization Forces that largely consist of Iran-backed militias.

It said the operation that will last several days is the first phase of the Will of Victory Operation that aims to secure wide areas of the western province of Anbar and the central and northern regions of Salahuddin and Nineveh.

Although Iraq declared victory against Daesh in July 2017, the extremists have turned into an insurgency and have carried out deadly attacks in the country.