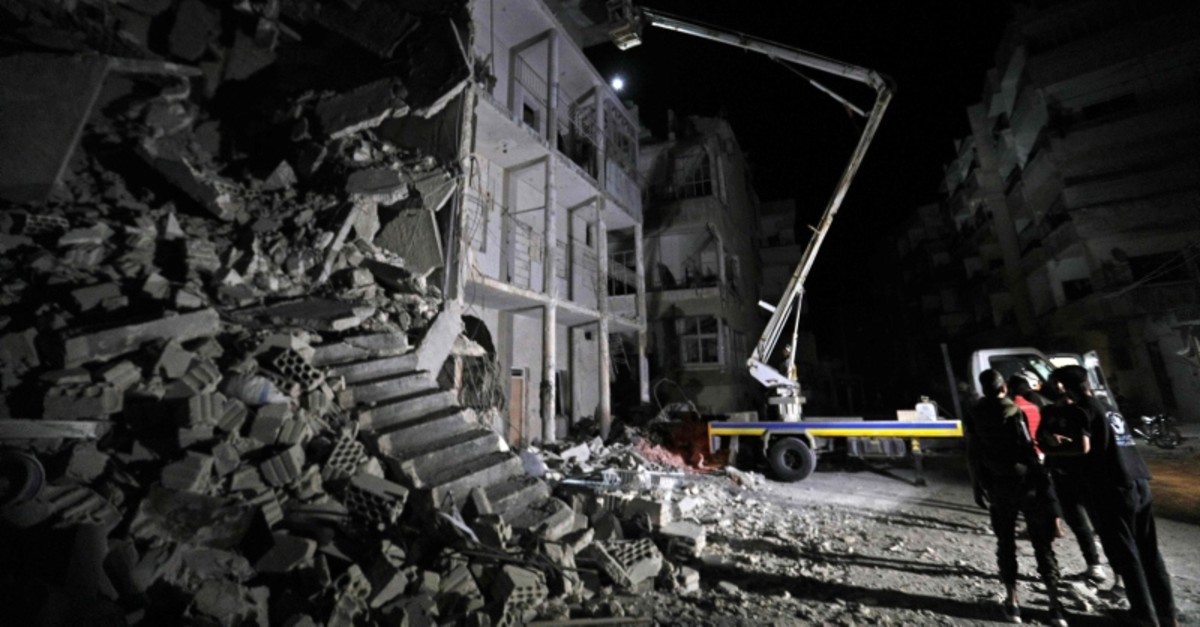 Members of the Syrian Civil Defence (White Helmets) search for victims as a building collapsed days after a reported air strike on the town of Ariha, in the south of Syria's Idlib province on July 31, 2019. (AFP Photo)
by Compiled from Wire Services Aug 01, 2019 9:27 pm

The Syrian regime has agreed to a truce in the northwestern region of Idlib on the condition that a Turkish-Russian buffer-zone deal is implemented, regime news agency SANA reported Thursday.

It cited a military source who announced the regime's "approval for a cease-fire in the deescalation zone in Idlib starting from tonight" on condition extremists and opposition groups withdraw forces and weaponry from a buffer zone as per a September accord struck in the Russian resort of Sochi.

The announcement came as talks resumed in Kazakhstan between Turkey and regime allies Russia and Iran.

Most of Idlib province and parts of Hama, Aleppo and Latakia -- which currently hosts some 3 million residents -- are controlled by Hayat Tahrir al-Sham (HTS), a terrorist group led by Syria's former al-Qaida affiliate.

The region is supposed to be protected from a massive regime offensive by the Turkish-Russian deal, but it has come under increasing fire by Damascus and its backer Moscow since the end of April. The deal provided for a buffer zone up to 20 kilometers (12 miles) wide separating opposition and regime fighters.

Regime forces and opposition groups have also clashed on the edges of the buffer zone, with battles killing nearly 2,000 combatants, including more than 930 regime loyalists over the same period, according to the Syrian Observatory for Human Rights war monitor.

Hospitals, schools and markets have been hit in the fighting.

Moscow's Syria envoy on Thursday welcomed the move by Damascus.

"Of course, we welcome the Syrian government's decision to introduce a truce," Alexander Lavrentiev was quoted as saying by Interfax news agency after the first day of peace talks in the Kazakh capital Nur-Sultan.

Among the topics of discussion were the situation in Idlib de-escalation zone and in northeastern Syria, confidence-building measures between conflicting parties, return of the refugees, humanitarian situation and post-war reconstruction, Lavrentiev noted.

Also speaking after the talks, Sheikh Rami Dosh, chairman of the Supreme Assembly for Syrian Tribes and Clans, said: "Syria belongs to everyone. It is sufficient for everyone. Separatist organizations cannot split this country."

Dosh added that Kurdish people suffer from the acts of PKK-affiliated People's Protection Units (YPG) terror group just like everyone else in the region.

Bashar said that they are against the ones who try to disturb relations between ethnic groups in Syria.

A Turkish delegation attended the talks under the leadership of Deputy Foreign Minister Sedat Önal.

The main meeting of the 13th round of peace talks will be held on Friday with the attendance of Assad regime and military opposition delegations.

Officials from Jordan, the U.N. High Commissioner for Refugees and International Red Crescent will be present at the meeting as observers.

Lebanon and Iraq, which were granted the observer status during 12th round of peace talks in Astana format held in late April, will attend the talks for the first time.

The talks in Astana format have been ongoing since January 2017 under the guarantee of Turkey, Russia and Iran.

Since then, more than 370,000 people have been killed and more than 10 million others displaced, according to U.N. officials.