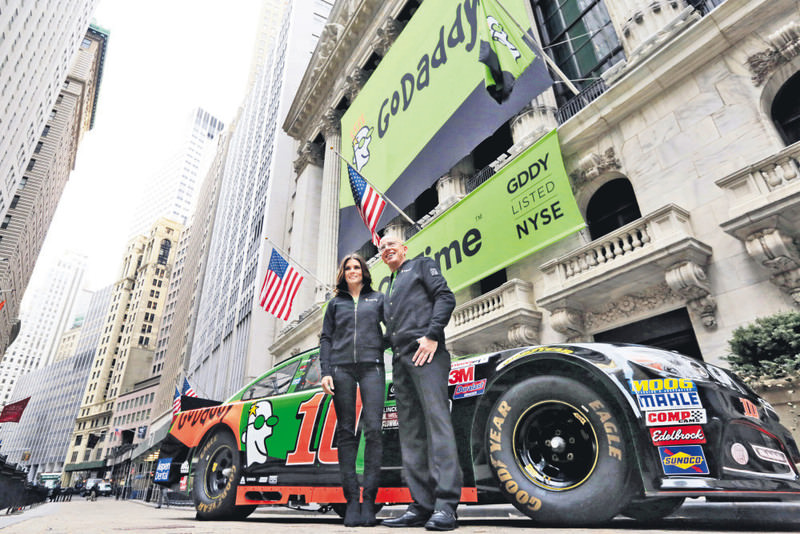 by French Press Agency - AFP Apr 02, 2015 12:00 am
GoDaddy, which has built its reputation trying to make Web hosting sexy, storms into Wall Street with a stock offering Wednesday aiming to revive the public markets' appetite for technology.

Arizona-based GoDaddy is expected to raise more than $400 million in an initial public offering (IPO) which marks the end of a noticeable drought for the sector, which has been pumped up by cash from private equity investors. The company is evaluated at just over $3 billion with a share price set Tuesday evening at $20, according to a statement from the company. The is outside a previously expected price range of $17 to $20.

In another sign that seems to hint at keen investor interest, GoDaddy has raised the number of shares on offer from 22 to 23 million. This would allow it to raise as much as $460 million in the IPO, or even more if options on additional shares are exercised.

GoDaddy, known for its provocative television ads with scantily clad women and its sponsorship of race car driver Danica Patrick, will be only the fourth IPO for the tech sector so far this year, according to Renaissance Capital. The company has kept an unusually public profile for a tech firm, gaining attention for example with its Super Bowl "beauty and the nerd" featuring model Bar Refaeli. The world's biggest domain name registrar, GoDaddy is heading to Wall Street even though many of its peers in the sector have been raising cash in private markets, sparking fears of a bubble.

In recent months, Uber, Dropbox, Airbnb and Pinterest have lifted their valuations with private equity funding.

Renaissance Capital noted that interest in tech IPOs "was likely dampened by the widespread availability of private funding at very high valuations, which produced little urgency for companies to seek IPO capital."

Some analysts say the unusual gap between private and public markets suggests a possible bubble - with equity investors scrambling to get in on an emerging company. "The private markets are a bit crazy now," says a report from the research firm CB Insights, which noted that venture-backed tech companies this year have already raised $9.8 billion compared to some $250 billion for IPOs. Last year, the firm said 34 U.S. tech companies raised $5.04 billion in their IPOs while private-backed tech companies took $39.03 billion. "There are, of course, some tech companies waiting in the wings to go public," CB Insights said. "Of course, it remains to be seen if private market valuations will be sustained by public market investors." Zacks Equity Research said investors should be cautious on GoDaddy, saying it is "in the highly competitive business of web hosting" with a number of other low-cost rivals. "Last year, GoDaddy's revenues rose 23 percent to $1.4 billion. However, this wasn't enough to cover costs, which netted a loss of $143.3 million," Zacks said. "The IPO will definitely provide it with cash. However, going forward, the company will still have a lot of debt. This will make it harder for GoDaddy to record profits." GoDaddy, which has been held by private equity groups KKR, Silver Lake and TCV since 2011, will trade under the symbol GDDY on the New York Stock Exchange.
Last Update: Apr 02, 2015 2:08 am
RELATED TOPICS