Erdoğan suggests 5G technology instead of investing in 4G 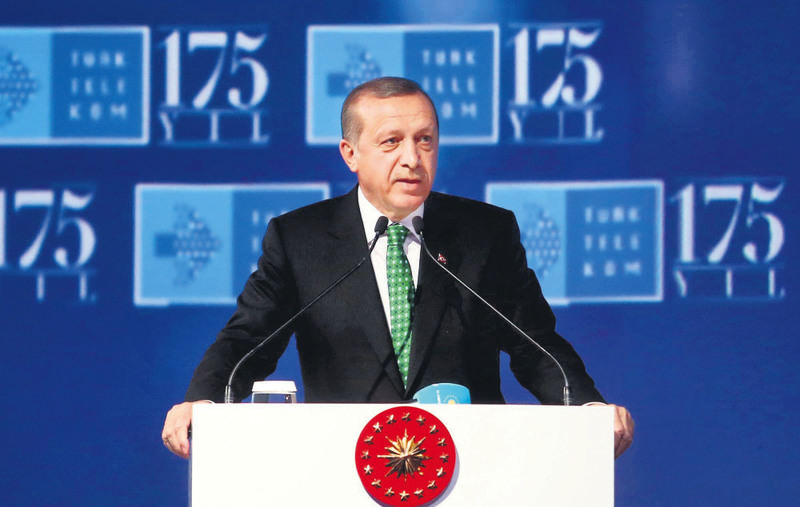 Two weeks after the tender announcements for 4G technology, which is scheduled to be held on May 26, President Erdoğan said Turkey should switch to 5G instead of wasting money on 4G investments

President Recep Tayyip Erdoğan said that the world is talking about 5G technology, while Turkey is still striving to switch to 4G, adding: "There is no need to waste time with 4G. Turkey must switch to 5G within the next two years. Otherwise Turkey will turn into a 4G garbage dump."

Delivering a speech at the 175th anniversary of the founding of the Turkish telecommunications company Türk Telekom late Tuesday, Erdoğan said that the privatization process of Türk Telekom in 2005 was rather a long and hand-wringing one, underscoring that developments, which were seen in institution after the privatization process, proved how correct this decision was. Türk Telekom, which has invested TL 17 billion ($6.278 billion) into Turkish telecommunications since it was privatized, has expanded its field of activity and strengthened its infrastructure, Erdoğan said, reiterating his support for everyone that contributes to the future of this country and its people by producing and providing employment opportunities. According to Erdoğan, when the present situation and investments are taken into consideration, criticisms that were directed against the privatization of Türk Telekom can be seen as wrong and unfair. Erdoğan asserted that if Türk Telekom had continued as an inefficient public institution as before, it might not have been possible to make such investments in 10 years.

Erdoğan also stressed that Turkey is in good condition concerning its 3G network and that there is no need to waste time with 4G, suggesting that Turkey should directly skip to 5G from 3G in the next two years, otherwise the country will turn into a 4G garbage dump.

The president's suggestion attracted attention two weeks ago after an announcement published in the Official Gazette stating that the 4G tender will be held on May 26 and the deadline for tender proposals was set for May 20.

Underlining that a state and a private institution have quite different investment priorities, Erdoğan said that Türk Telekom has made a breakthrough over the past 10 years because it focused on its own priorities after privatization. Erdoğan indicated a desire to achieve the same performance in all fields, lambasting those who object to the idea of privatization driven by their political targets. Erdoğan said that this political logic will not serve the growth of the country.

Meanwhile, Türk Telekom announced its profit for first quarter of 2015 yesterday. The company's net profit was TL 27 million with the negative effect of the Turkish lira's value loss against the dollar.

According to the board decision published on BTK's website, the regulations regarding the project has been approved and the approved campaign will be announced to Internet Service Providers (ISPs) by Türk Telekom.

The campaign will be offered for new sales of Internet packages with xDSL Wholesale Purchase-Sell and IP Level Data Flow Access models and with four Mbps and a four-GB quota until July 13, 2015. The package will only be available for new subscribers and for subscribers who have cancelled their subscriptions at least three months prior.

Subscribers will be able to cancel their subscriber's contracts at the end of the campaign without any fines and for those subscribers that want to continue using the package, pricing will be calculated over the package fees announced in the tariffs. The campaign aims to support and extend broadband Internet use and to minimize the difference between regions. It also aims to increase demand and supply of electronic communication services for non-subscribers of broadband Internet services.
Last Update: Apr 22, 2015 10:55 pm
RELATED TOPICS