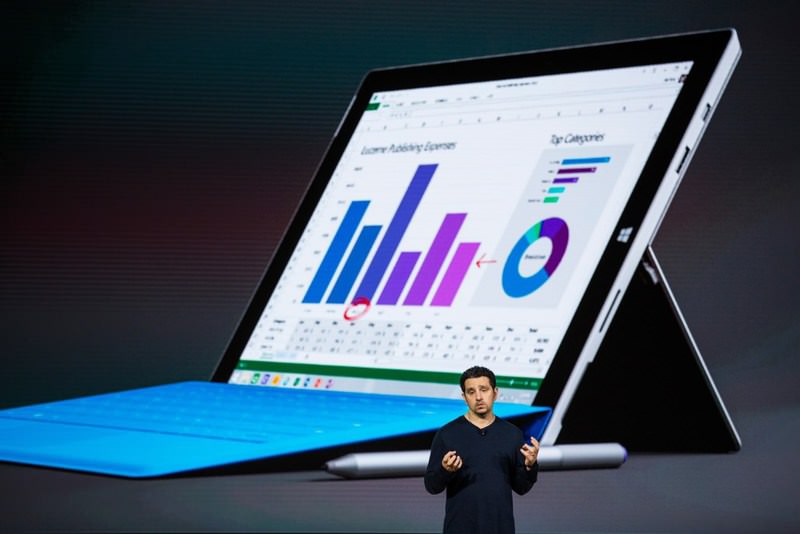 by French Press Agency - AFP
Oct 08, 2015 12:00 am
Microsoft unveiled its first Windows 10 smartphones Tuesday as it launched a series of new gadgets in a bid to win a bigger share of the competitive mobile market. The technology giant's two premium Lumia smartphones take aim at popular devices offered by Apple and Samsung and add a few original features, such as a security tool that unlocks the phone by scanning a user's eye.

Microsoft also unveiled its first laptop, the Surface Book - which also runs the Windows 10 operating system (OS) - and whose 13.5-inch detachable screen can be used like a notepad with a matching stylus.

The launch marks the latest step by CEO Satya Nadella to build on the July release of Windows 10, which Microsoft said Tuesday was now running on 110 million devices around the world. "We now begin a new chapter of Windows 10 with new devices built for Windows 10," Nadella said at the New York City launch event. "What matters most is the mobility of your experience more than the mobility of any specific device."

The latest smartphone pitch follows a bruising rethink of the technology following Microsoft's disastrous 2014 acquisition of Nokia for some $7.2 billion. Microsoft subsequently wrote down the Nokia assets by $7.5 billion and eliminated more than 25,000 jobs. Microsoft's Lumia 950 features a 5.2-inch high-definition screen and a 20-megapixel camera, while the Lumia 950 XL has a larger 5.7-inch screen. The Lumia 950 will price at $549, while the Lumia 950 XL at $649. A third, more modest phone with fewer functions, the Lumia 550, will start at $139. The Lumia phones will be launched in November. Both phones can be connected by a small, portable display dock accessory to a personal computer, a large screen or another display device. A keyboard or mouse can be connected as well, expanding the capacity of a smartphone to operate like a personal computer. "We want to bring Windows 10 to life in your pocket," said Panos Panay, corporate vice president for Microsoft's Surface division.

Analysts said there is little chance for Microsoft to quickly shift the dynamics of the smartphone business, in which it holds only about 3 percent, according to IDC. Forrester Research analyst Frank Gillett said the phones' innovative eye-screening security and ability to link to other computing capacities were intriguing ideas, with the latter of particular interest to enterprises. But the challenge to win market share is tough because it will require consumers who already have built relationships with other smartphone systems to switch, he said. "These are steppingstone devices," Gillett said. "Microsoft is trying to demonstrate that it can put out competitive interesting devices with some interesting or unique features. What they're really going to be groping for is something game-changing six or 12 months down the line."

Gillett also praised Nadella's emphasis on Windows 10 and the intent behind statements by the Microsoft chief that "devices come and go ... you are the hub." Microsoft's objective is to build a "sticky, ongoing relationship" with consumer data that transcends any device, Gillett said.

Analysts said the laptop investment was a bid to cede no further ground to rivals. Bob O'Donnell from the research firm Technalysis said the laptop "definitely had the 'wow'" factor and that the notebook could score points with tech "influencers" as well as with creative professionals and artists. "It's the first real, credible competition we've seen for Apple on that side," O'Donnell said. Powered by sixth-generation Intel processors with up to 12 hours of battery life, the Surface Book starts at $1,499.

Other gadgets unveiled included upgraded versions of the Surface Pro tablet, a wearable fitness tracker and a new HoloLens system that lets users manipulate objects made of light - but which will not be available until the first quarter of 2016.