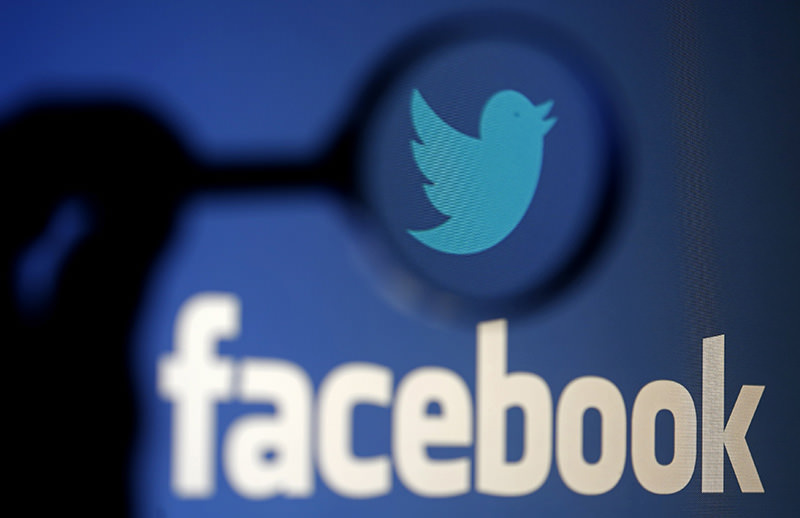 |Reuters Photo
by Dec 06, 2015 12:00 am
Facebook, Google and Twitter are stepping up efforts to combat online propaganda and recruiting by terrorists, but the Internet companies are doing it quietly to avoid the perception that they are helping the authorities police the Web.

On Friday, Facebook Inc said it took down a profile that the company believed belonged to San Bernardino shooter Tashfeen Malik, who with her husband is accused of killing 14 people in a mass shooting that the FBI is investigating as an "act of terrorism."

The Internet companies described their policies as straightforward: they ban certain types of content in accordance with their own terms of service, and require court orders to remove or block anything beyond that. Anyone can report, or flag, content for review and possible removal.

But the truth is far more subtle and complicated. According to former employees, Facebook, Google and Twitter all worry that if they are public about their true level of cooperation with Western law enforcement agencies, they will face endless demands for similar action from countries around the world.

They also fret about being perceived by consumers as being tools of the government. Worse, if the companies spell out exactly how their screening works, they run the risk that technologically savvy militants will learn more about how to beat their systems.

"If they knew what magic sauce went into pushing content into the newsfeed, spammers or whomever would take advantage of that," said a security expert who had worked at both Facebook and Twitter, who asked not to be identified because of the sensitivity of the issue.

One of the most significant yet least understood aspects of the propaganda issue is the range of ways in which social media companies deal with government officials.

Facebook, Google and Twitter say they do not treat government complaints differently from citizen complaints, unless the government obtains a court order. The trio are among a growing number that publish regular transparency reports summarizing the number of formal requests from officials about content on their sites.

But there are workarounds, according to former employees, activists and government officials.

A key one is for officials or their allies to complain that a threat, hate speech or celebration of violence violates the company's terms of service, rather than any law. Such content can be taken down within hours or minutes, and without the paper trail that would go with a court order.

"It is commonplace for federal authorities to directly contact Twitter and ask for assistance, rather than going through formal channels," said an activist who has helped get numerous accounts disabled.

In the San Bernardino case, Facebook said it took down Malik's profile, established under an alias, for violating its community standards, which prohibit praise or promotion of "acts of terror." The spokesman said there was pro-Daesh content on the page but declined to elaborate.

Some well-organized online activists have also had success getting social media sites to remove content.

A French-speaking activist using the Twitter alias NageAnon said he helped get rid of thousands of YouTube videos by spreading links of clear cases of policy violations and enlisting other volunteers to report them.

"The more it gets reported, the more it will get reviewed quickly and treated as an urgent case," he said in a Twitter message to Reuters.

A person familiar with YouTube's operations said that company officials tend to quickly review videos that generate a high number of complaints relative to the number of views.

Relying on numbers can lead to other kinds of problems.

Facebook suspended or restricted the accounts of many pro-Western Ukrainians after they were accused of hate speech by multiple Russian-speaking users in what appeared to be a coordinated campaign, said former Facebook security staffer Nick Bilogorskiy, a Ukrainian immigrant who helped some of those accounts win appeals. He said the complaints have leveled off.

What law enforcement, politicians and some activists would really like is for Internet companies to stop banned content from being shared in the first place. But that would pose a tremendous technological challenge, as well as an enormous policy shift, former executives said.

Some child pornography can be blocked because the technology companies have access to a database that identifies previously known images. A similar type of system is in place for copyrighted music.

There is no database for videos of violent acts, and the same footage that might violate a social network's terms of service if uploaded by an anonymous militant might pass if it were part of a news broadcast.

Nicole Wong, who previously served as the White House's deputy chief technology officer, said tech companies would be reluctant to create a database of terrorist videos, even if it could be kept current enough to be relevant, for fear that repressive governments would demand such set-ups to pre-screen any content they do not like.

"Technology companies are rightfully cautious because they are global players, and if they build it for one purpose they don't get to say it can't be used for anything else," said Wong, a former Twitter and Google legal executive.

"If you build it, they will come - it will also be used in China to stop dissidents."

There have been some formal policy changes. Twitter revised its abuse policy to ban indirect threats of violence, in addition to direct threats, and has dramatically improved its speed for handling abuse requests, a spokesman said.

"Across the board we respond to requests more quickly, and it's safe to say government requests are in that bunch," the spokesman said.

Google's YouTube has expanded a little-known "Trusted Flagger" program, allowing groups ranging from a British anti-terror police unit to the Simon Wiesenthal Center, a human rights organization, to flag large numbers of videos as problematic and get immediate action.

A Google spokeswoman declined to say how many trusted flaggers there were, but said the vast majority were individuals chosen based on their past accuracy in identifying content that violated YouTube's policies. No U.S. government agencies were part of the program, though some non-profit U.S. entities have joined in the past year, she said.

"There's no Wizard of Oz syndrome. We send stuff in and we get an answer," said Rabbi Abraham Cooper, head of the Wiesenthal Center's Digital Terrorism and Hate project.