Toshiba warns of $4.5B fiscal loss as shares slump 9.8 pct 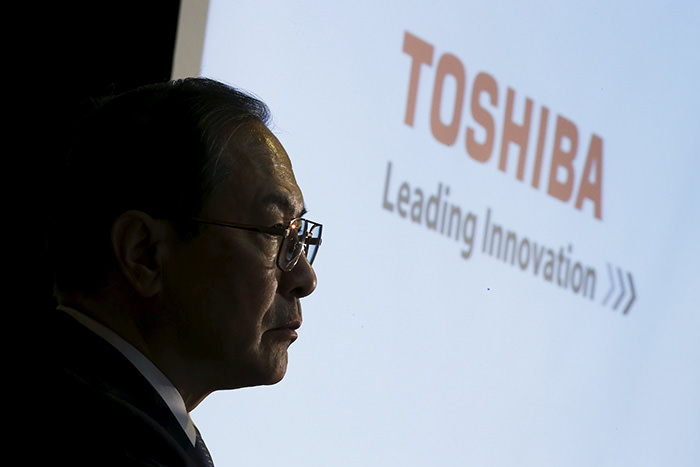 Toshiba Corp President and CEO Masashi Muromachi attends a news conference at the company headquarters in Tokyo, Japan, December 21, 2015 (Reuters Photo)
by Dec 21, 2015 12:00 am
Scandal-hit conglomerate Toshiba warned Monday it expects to post a record annual loss of $4.5 billion and slash thousands of jobs, as shares in the firm plunged nearly 10 percent.

In a statement right after the close of trading, the company said it will cut 6,800 positions in its lifestyle business by introducing early retirement programs and repositioning personnel, as well as carry out other structural reforms.

As a result of such changes, Toshiba said it expects a 550 billion yen ($4.53 billion) net loss for the year to March, exploding from a 37.8 billion yen loss in the previous 12 months.

Shares in the company slumped 9.8 percent to end at 254.8 yen on the Nikkei stock index. The broader market ended down 0.37 percent.

Investors dumped the troubled company after the leading Nikkei business daily said in its Saturday edition that it was expected to report a net loss of 500 billion yen.

The news is the latest blow to the 140-year-old firm after it was hit this year by revelations that executives systematically pressured underlings to inflate profits in a years-long scheme to hide poor results.

One of the most damaging accounting scandals to hit Japan in recent years, the case forced Toshiba's incumbent president and seven other top executives to resign.

Toshiba, which sells everything from rice cookers to nuclear reactors, has admitted it had inflated profits by about $1.2 billion since the 2008 global financial crisis.

Toshiba's statement came two weeks after the Securities and Exchange Surveillance Commission watchdog said the company should be slapped with a record $60 million fine over the scandal.
Last Update: Dec 21, 2015 2:31 pm
RELATED TOPICS