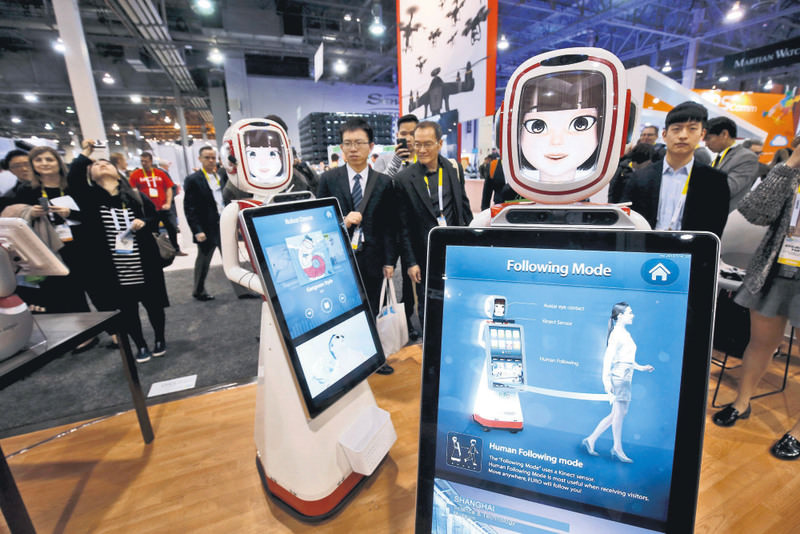 Furo-D robots created by South Korean-based Future Robot are shown during the 2016 CES trade show in Las Vegas. The advertising service robots can both provide and collect information.
by Jan 11, 2016 12:00 am

After the smartphone wars, browser wars and platform wars, a fight is on to be the ‘hub' that connects the millions of connected objects from light bulbs and wearables to washing machines

The battle to be at the center of your digital life has taken on a new dimension amid a proliferation of connected devices. At the Consumer Electronics Show (CES), which concluded Saturday in Las Vegas, Nevada, the contenders included robots, televisions, speaker hubs and even wearable trackers powered by artificial intelligence (AI). And the connected car raced into the mix.

Exhibitors ranging from startups to big consumer electronics giants are vying to be the control center for the vast array of the Internet of Things (IoT) in your home, car and elsewhere. South Korea's LG unveiled its Smart ThinQ home hub, a speaker that lets a user communicate with and get alerts from connected appliances, security systems and even talk to cars. This allows the smart home and connected car to communicate with each other. And it can connect with older appliances with attachable sensors.

LG calls this "the future of the smart home," and uses an open platform that can connect with devices using Google's parent company Alphabet's Nest devices, Bluetooth, Wi-Fi and more.

Samsung announced its TVs will act as command centers in smart homes by incorporating technology from Silicon Valley start-up SmartThings, which Samsung bought in 2014, allowing them to control devices synched to the platform. "You can have a smart home basically for free as a starting point; it is pretty amazing," SmartThings founder and CEO Alexander Hawkinson told Agence France-Presse (AFP). Chinese electronics giant Haier unveiled its Ubot personal assistant robot - a near-humanoid gadget that can control home appliances. "He's like a personal assistant who can turn on your TV and all your appliances. And when you're not home, he helps with surveillance," said Haier's Kristen Smith. "The ultimate goal is to simplify your life, to take care of the things you worry about."

Segway, which is owned by China's Ninebot, unveiled a personal transporter that morphs into a cute robotic personal assistant. The robot, made in collaboration with Intel and China's Xiaomi, is open to developers, which could add on apps for security, entertainment or other activities. After riding it, the device sprouts arms and can navigate and interact with users with its sensors and AI. It is expected to be commercialized later this year.

The Chinese startup UBTech Robotics unveiled the more whimsical Alpha 2, a prototype personal assistant humanoid that can respond and entertain. "You can talk to him and he will answer," said UBTech's Jessica Pan. "He can give you the weather and he is very lifelike. He has 20 joints and can move like humans. He can dance [or] show you a yoga pose."

These new contenders face a tough battle against entrenched companies like Google and Apple - not part of the floor exhibitors at CES - who each have their own AI assistants as well as ecosystems for connected homes and wearables. And Facebook's Mark Zuckerberg said ahead of the show that he wants to build a robot butler "like Jarvis in 'Iron Man'" that can manage household tasks. While Zuckerberg and Facebook were not exhibiting at CES, his comments and the innovations that were displayed at the show underscored the progress being made in computing and AI, which can potentially unleash new innovations. Israeli-based startup OrCam, for example, unveiled a wearable AI clip-on camera that "acts like a personal assistant like [Apple's] Siri or [Microsoft's] Cortana, but with eyes and ears," said OrCam marketing chief Eliav Rodman. The device "can provide a real-time profile of people as they walk up to you during a conference, displaying their details on your smartphone or watch; it can [even] track your eating habits," said OrCam co-founder Amnon Shashua. "It can even monitor the facial expressions of people you meet and topics of discussion, and let you know in hindsight the quality of interaction you have with friends and family," Shashua added.

Carmakers do not want to be left out either. Ford, for example, unveiled an alliance at CES with United States tech giant Amazon aimed at allowing people to connect their cars into "smart home" networks. The tie-up will enable drivers to communicate with the hub and, for instance, ask if their garage door is open, or request an appointment with their mechanic. Other carmakers, including BMW and Volkswagen, showed systems that connect not only to a smartphone but to home networks, enabling users to activate smart appliances or garage door openers, for example. These new systems offer new connecting options but could create confusion because of multiple technical standards. "It almost forces you to get things within the same brand in order to match up," said Ron Montoya at the auto research firm Edmunds.com. Roger Kay, analyst at Endpoint Technologies Associates, agreed, stressing: "There is no grand architecture, so everyone is making a land grab. Everyone wants to be the hub." Kay said until players such as Apple, Google and Microsoft agree on open standards, "it [is] going to be difficult for this market to move forward."
RELATED TOPICS