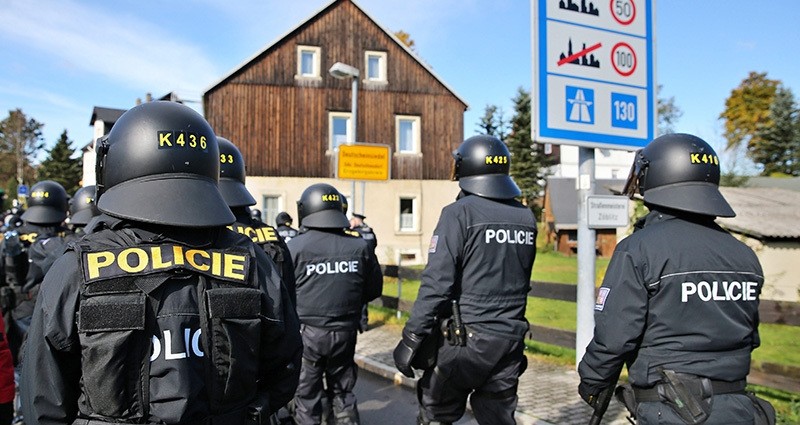 Czech police officers cross the border for a joint mission during a cross-border demonstration in Deutschneudorf, Germany, 19 October 2016 (EPA Photo)
by Associated Press Oct 19, 2016 12:00 am

Czech police have arrested a Russian hacker suspected of cyberattacks in the United States, officials said on Wednesday.

Police said an international warrant on the man, who was not named, was issued by Interpol and that officers cooperated with the U.S. Federal Bureau of Investigation on the case.

Police spokesman Jozef Bocan said the man was arrested in a Prague hotel, and that after the arrest he collapsed, received first aid treatment and was hospitalized.

Another police spokesman, David Schoen, told The Associated Press the arrest took place on Oct. 5 and that police delayed releasing information about it for "tactical" reasons.

Police video from the arrest, obtained by the AP, identified the man only as Yevgeniy N.

Prague's Municipal Court will now have to decide on his extradition to the United States, with Justice Minister Robert Pelikan having the final say.

Spokeswoman Marketa Puci said the court ruled on Oct. 12 that the man will remain in detention until the extradition hearing. No date has yet been set.

The U.S. has accused Russia of coordinating the theft and disclosure of emails from the Democratic National Committee and other institutions and individuals in the U.S. to influence the outcome of the election. Russia has vigorously denied that.

It is not immediately clear if this case has anything to do with that accusation.