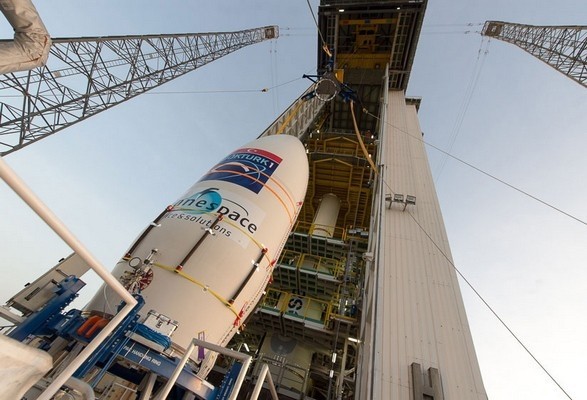 Turkey launched Göktürk-1, a satellite developed to provide target intelligence and imagery for military and civilian purposes, via a Vega launch vehicle, from the European Space Center in French Guiana, on Monday.

The launch, that took place through a live event at 4:52 p.m, was attended by President Recep Tayyip Erdoğan, and was organized by the Air Force Command and the Under-secretariat for defense industries at the Turkish Aerospace Industries' (TAI) Akıncı Air Base.

With the launch of Göktürk-1, Turkey's eye in the sky, the country now has six active satellites in space.

The Reconnaissance Satellite Battalion, under the supervision of the Turkish Air Force, will command and control the satellite and will record data in an inventory following orbit tests and admission phases.

The launch ceremony, which marked a historical and revolutionary step in Turkey's integration into space technologies, was attended by President Recep Tayyip Erdoğan.

Speaking at the ceremony, Erdoğan thanked everyone contributing to the success of the project. Underscoring that Göktürk-1 will provide target intelligence for the Turkish Armed Forces; he elaborated its other civilian uses, including monitoring marine pollution, forestry and harvest forecasts.

He said Göktürk-1 demonstrates Turkey's strong commitment to space research. President Erdoğan also stressed on the necessity of designing and developing satellites locally that require cutting-edge technology. Referring to a recent embargo imposed by Austria, he said, "These actions reinforce our will and ambition to develop our own national defense industry."

Göktürk-3 on the way

Göktürk-3, a synthetic aperture radar (SAR) reconnaissance and surveillance satellite system is being developed using domestic resources. It will also provide high-resolution images from any location in the world, day and night, to fulfill the intelligence requirements of the Turkish military. With the first phase of the Göktürk-1 project complete, the satellite is being planned for launch by the end of 2019.