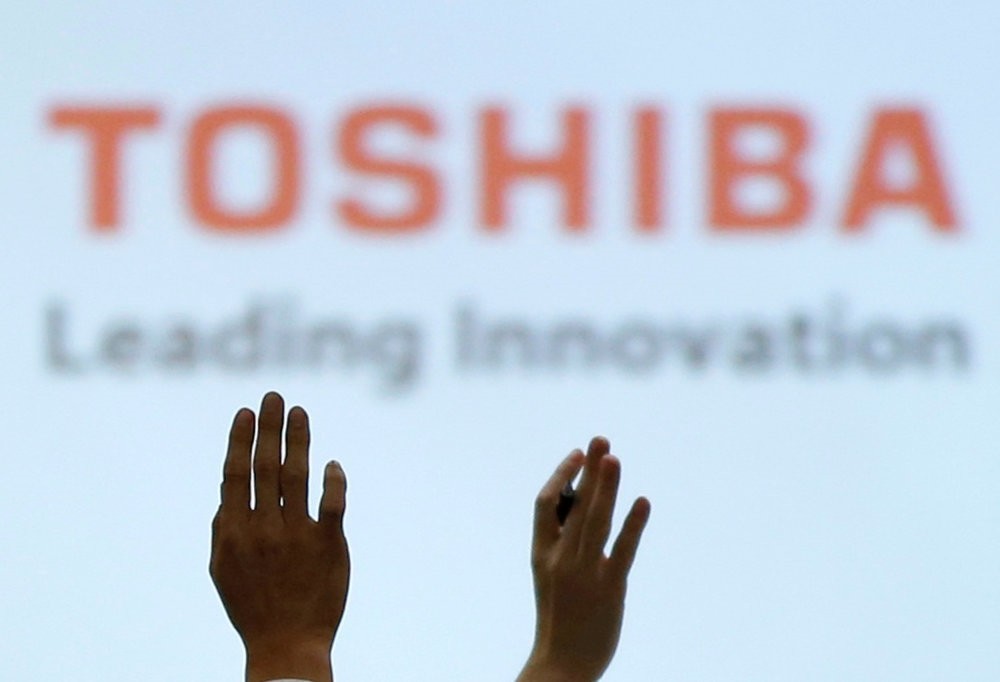 Reporters raise their hands for a question during a news conference by Toshiba Corp CEO Satoshi Tsunakawa and other senior sompany officials at the companyu2019s headquarters in Tokyo.
by Associated Press Feb 22, 2017 12:00 am
Embattled Japanese electronics maker Toshiba Corp. is selling its stake in a medical equipment leasing company to Canon Inc. for 31.4 billion yen ($277 million). Toshiba said yesterday it is selling its entire 65 percent stake in Toshiba Medical Finance Co. to Canon, a Japanese camera maker, effective March 31. Tokyo-based Toshiba has been in talks with Canon since late last year on the sale. Toshiba, which owns U.S. nuclear company Westinghouse, is in deep trouble after suffering massive losses in its nuclear business. It has been selling off lucrative businesses such as its computer-chip operations.

It is projecting a 712.5 billion yen ($6.3 billion) loss for its nuclear business, and has been unable to report April-December financial results. Its chairman has resigned to take responsibility for the mess. Toshiba has already sold part of its chip business, and its president has said it is thinking about selling all of it to get out of the massive red ink. It has also sold its household appliance unit to Midea of China, which is maintaining the Toshiba brand name. The company has said it will no longer take on new reactor construction projects and will focus on maintaining the reactors it already has.

Toshiba is also involved in the decommissioning of Japan's Fukushima Dai-ichi nuclear plant, which suffered multiple meltdowns after a massive March 2011 earthquake and tsunami. Its costs have risen because of growing safety concerns and regulations after the Fukushima accident, adding to Toshiba's woes. Its reputation has also been tarnished in recent years by a scandal over the doctoring of accounting books to meet unrealistic profit targets.
RELATED TOPICS