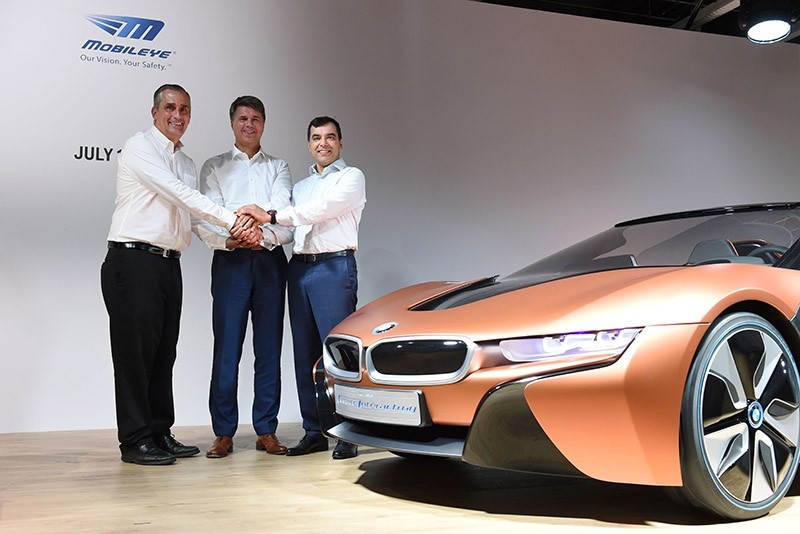 The BMW Group, Intel and Mobileye, the three leaders from automotive, technology and computer vision and machine learning industries are collaborating to bring solutions for fully automated driving into series production by 2021. (AFP Photo)
by Compiled from Wire Services
Mar 13, 2017 12:00 am

U.S. tech giant Intel will buy Israeli tech firm Mobileye, which makes driver-assistance systems, for 15-16 billion dollars, in what could be the largest ever such buy-out in Israel's history, The Marker newspaper reported on Monday.

The companies will announce the deal, which would be the world's biggest purchase of a company solely focused on the autonomous driving sector, later in the day, several news outlets reported, without citing sources.

Neither Intel nor Mobileye, which accounts for 70 percent of the global market for advanced driver-assistance and anti-collision systems, were immediately reachable for comment.

Mobileye's stock surged 33 percent to $62.90 a share in premarket U.S. trading on the reports.

One banking source said it seemed an announcement would be made on Monday, calling it "a very significant strategic deal", but did not offer a valuation.

German car maker BMW at the same time announced that it was working with Intel and Mobileye on testing 40 autonomous cars in the second half of this year.

Their partnership was first launched in 2016. The trio said they planned "to bring solutions for highly and fully automated driving into series production by 2021."

For a decade, Mobileye has relied on Franco-Italian chipmaker STMicroelectronics to produce chips which the Israeli company sells to many of the world's top automakers for its current, third-generation of driver-assistance systems.

However, while it was working with BMW, Mobileye also teamed up with Intel for its fifth-generation of chips that aim to be used in fully autonomous vehicles and are scheduled to be delivered around 2021.

Founded in 1999, Mobileye made its mission to reduce vehicle injuries and fatalities. After receiving an investment of $130 million from Goldman Sachs in 2007, it listed on the New York Stock Exchange in 2014. It has a market value of $10.6 billion.

The Qualcomm-NXP deal, which will create the industry's largest portfolio of sensors, networking and other elements vital to autonomous driving, is expected to close later in 2017, subject to regulatory and shareholder approvals.

Intel already has an estimated 10,000 employees in Israel. The company is seeking to gain a competitive advantage after lagging in the mobile sector.