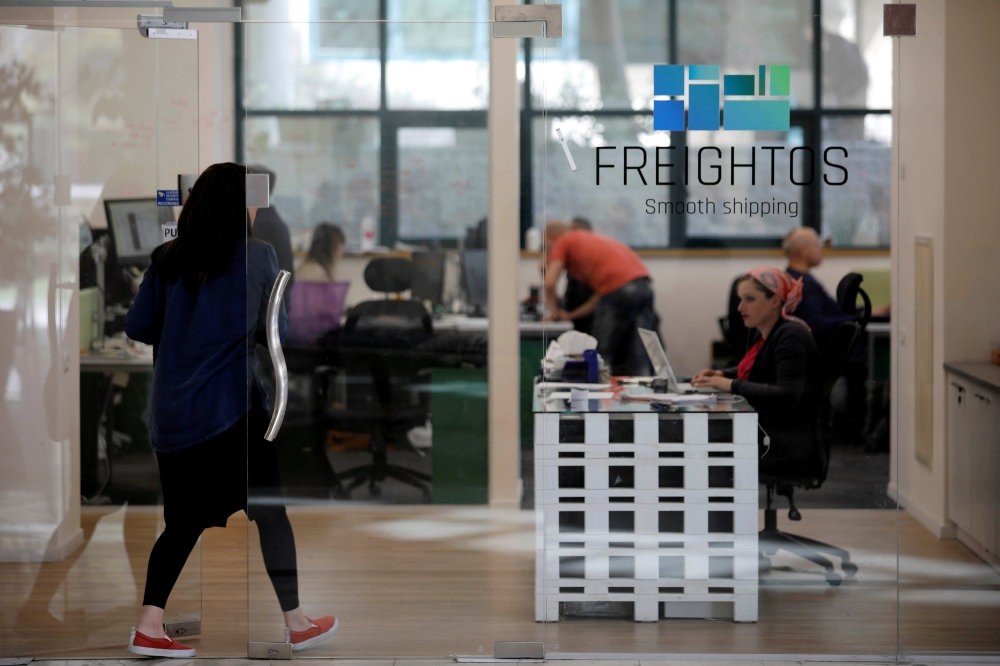 A woman enters the offices of Freightos, an online marketplace for international shipping, with investors including Sadara Ventures.
by Apr 03, 2017 12:00 am
The backstreets of Ramallah are a long way from Silicon Valley, but a niche venture capital fund is trying to narrow the gap with a focus on early-stage Palestinian tech startups. With backing from Cisco, the Google Foundation, the European Investment Fund and others, Sadara Ventures is making gradual inroads in the West Bank, the Palestinian territory long occupied by Israel, financing six companies so far. Launched in 2011 by Saed Nashef, a Palestinian-American who was a software engineer at Microsoft before setting up his own companies, and Yadin Kaufmann, an Israeli-American who helped pioneer venture capital in Israel, Sadara raised $30 million for its first fund and plans to invest it over 10 years. In a sign of confidence, a second fund is being considered.

"We're likely to raise another fund in the months ahead that would be larger than the existing one," said Kaufmann, adding that beyond the six firms backed so far, he and Nashef were looking at one or two others for the existing fund.

The biggest success at this stage is Freightos, an online marketplace for international shipping, which on March 29 raised a further $25 million from investors, including GE Ventures, and has seen orders double in the last quarter. Freightos has offices in Jerusalem and Ramallah, where chief technology officer Fareed Qaddoura, previously a programming manager at Amazon, oversees around 70 R&D staff.

Other firms in Sadara's portfolio include Yamsafer, an online travel service focused on Arab-world clients, SoukTel, which provides digital communications to aid agencies and others working in hostile or hard-to-reach environments, and an Arabic-language medical consultancy called WebTeb.

For Nashef, who lives in Jerusalem and splits his time between the West Bank and the United States, there is no doubt Palestinians have the drive and ideas to succeed as entrepreneurs. The challenges lie elsewhere.

"The biggest obstacles they face are access and exposure," he said, referring to the ability to get out of the West Bank and learn from what is going on in the startup world in the United States or neighbouring Israel, where the venture capital and startup culture is well-funded and flourishing.

"That's an outcome of the political situation that cannot be ignored," he said, referring to Israel's occupation, which limits movement for Palestinians in and out of the West Bank and Gaza. "But also, it has to be said that Palestine is not exactly top of mind when people think of tech investment."

As a result, Palestinian entrepreneurs need to have more grit and investors need to take more risks.

"When we started the fund, we made sure the limited partners were aware of the risks, that they shouldn't be looking for the standard VC returns they get in Silicon Valley," he said.

While those partners - who also include the Soros Economic Development Fund, AOL founder Steve Case's foundation and former eBay president Jeff Skoll's foundation - want to make money, they also think about what Nashef refers to as "the double bottom-line": earning a profit and having a social impact. The companies Sadara has backed employ more than 200 people and have generated investment of $74 million, including Freightos' latest fund-raising round, which has a knock-on impact economically and is part of the process of building a "tech ecosystem" in the Palestinian territories.