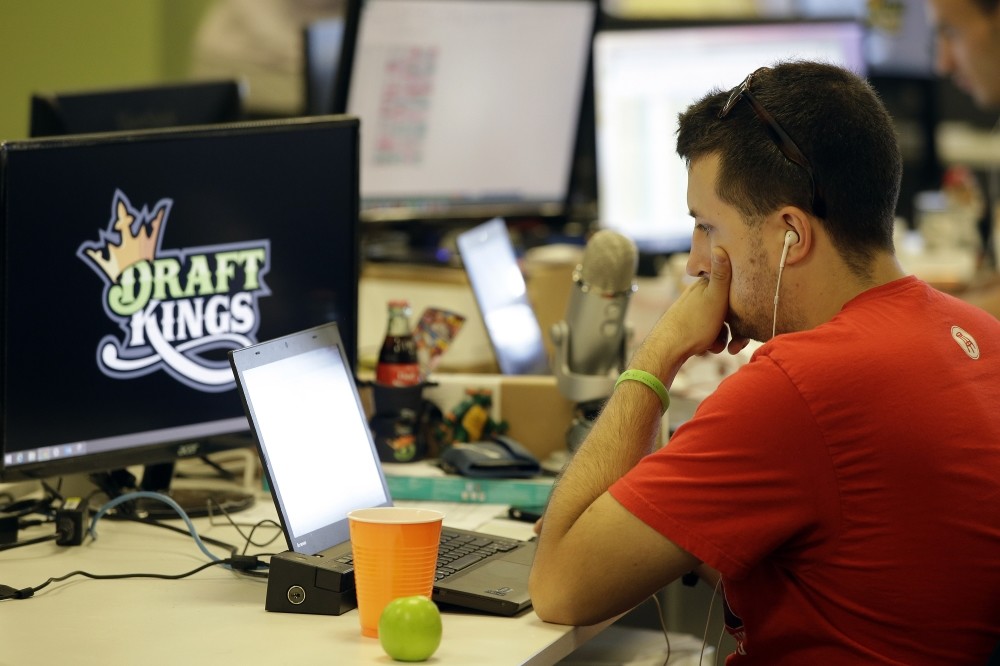 Devlin Du2019Zmura, a tending news manager at DraftKings, a daily fantasy sports company, works on his laptop at the companyu2019s offices in Boston.
by Associated Press Apr 19, 2017 12:00 am

The daily fantasy sports industry sharply contracted since the online games offered by companies like FanDuel and DraftKings sparked court and legislative battles across the United States last year. More than two-thirds of companies that existed this time last year have shuttered, changed focus or joined with competitors, according to the Fantasy Sports Trade Association, the industry's lobbying arm.

Among the most prominent examples is the proposed merger between the industry's two largest companies - Boston's DraftKings and New York's FanDuel. That deal, which was announced late last year, is currently being reviewed by the Federal Trade Commission.

At least three notable companies - Fantasy Aces, FantasyHub and FantasyUp - shuttered while still owing players money, prompting other operators to assume their assets and pledge to make customers whole. Many smaller operators have also quietly folded. At peak last year, 118 member companies offered some form of paid daily fantasy sports, the trade association said. Of those, 81 are no longer offering contests or their status is unknown.

The legal chaos and uncertainty that befell the industry starting with the 2015 NFL season has driven away investors, making it impossible for many startups to continue to raise the financial capital to survive, said Peter Schoenke, the trade association chairman.

The uncertainty also shook out companies not offering much new or distinctive from the competition, added Daniel Barbarisi, author of "Dueling With Kings," an inside look at the industry's rise and fall released last month.

"Everyone thought DFS was the next gold rush," he said. "It couldn't sustain that level of speculative growth, especially from small operators. Now that the barrier to entry is higher, I'm not surprised at all to see many of them falling by the wayside."

The legal landscape, meanwhile, remains unsettled, and the industry is again engaged in a costly, state-by-state legislative push. Roughly half of all U.S. states have seen proposals introduced to legalize and regulate the industry.

Lawmakers in other states will become receptive to the proposals as they see how the regulations are working in other states, said Marc La Vorgna, a spokesman for DraftKings and FanDuel. "The evidence is there for legislators," he said. "Any uncertainty around the impact of these laws has been removed."

Indeed New York, one of a handful of states that impose a tax on daily fantasy sports, says it took in nearly $3 million in revenues in the first months of its new law.

During last year's legislative push, DraftKings, FanDuel and the trade association spent at least $500,000 on lobbyists and its employees donated roughly $380,000 to political campaign committees at the state government level, according to the most recent data collected by the National Institute on Money in State Politics in Helena, Montana.

Some states are considering imposing costly licensing fees and other regulatory hurdles that smaller operations complain could put them out of business.

Despite the consolidation, demand for the games still appears healthy.

From 2015 to 2016, the total amount of entry fees paid by players grew 4 percent to about $3.3 billion and net revenues for companies rose about 15 percent to $350 million, according to the California-based gambling research firm Eilers & Krejcik Gaming.