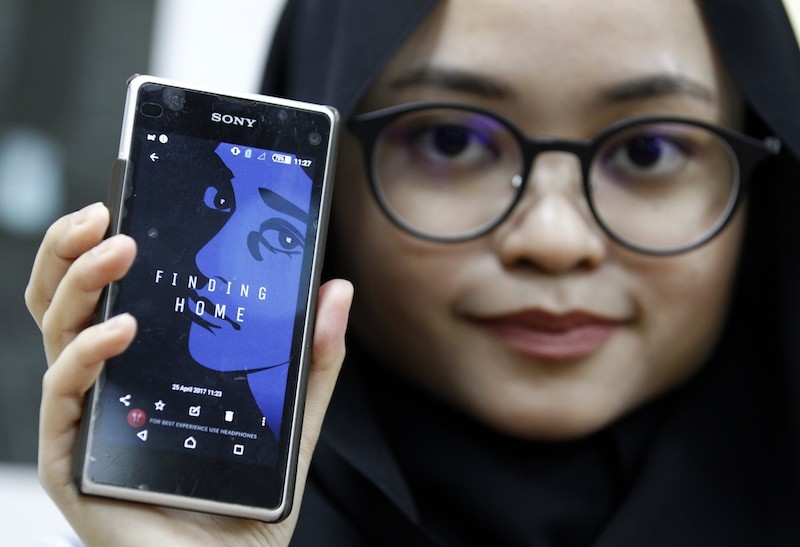 Staff member of the United Nations High Commission for Refugees Izarra Azuddin displays the application ,Finding Home, on her smart phone during a launch at the UNHCR headquarters in Kuala Lumpur, Malaysia. AP Photo
by Associated Press Apr 25, 2017 12:00 am

A new smartphone app launched Tuesday with the help of the United Nations allows users to "walk a mile in a refugee's shoes" through simulations of the daily struggles of a fictional Rohingya Muslim forced to flee her home.

The "Finding Home" app, developed by the advertising firm Grey Malaysia, allows users to simulate the phone of "Kathijah," a fictional 16-year-old who fled persecution in Myanmar and is trying to make a new life in Malaysia.

Users essentially take over Kathijah's phone, answering her calls and texts and scrolling through her photos. In one scenario, she gets a message from her brother Ishak back in Myanmar.

Richard Towles, the UNHCR representative in Malaysia, said he hopes the free app will help people empathize with refugees.

"The refugee story is often a deeply personal one and difficult for people to understand," Towles said. "We hope that this application will allow a viewer to walk a mile in a refugee's shoes in order to understand what they go through every day in order to find safety."

There are more than 150,000 asylum seekers and refugees in Malaysia, one of the highest numbers in Asia, according to the UNHCR. About a third of them are ethnic Rohingya Muslims, identified by the U.N. as one of the world's most persecuted minorities, who are denied citizenship by Myanmar and chased off their land in repeated outbreaks of communal violence.

"The refugee crisis is everywhere, yet we are inevitably desensitized to it as it has been going on so long," said Grey's creative director, Graham Drew.