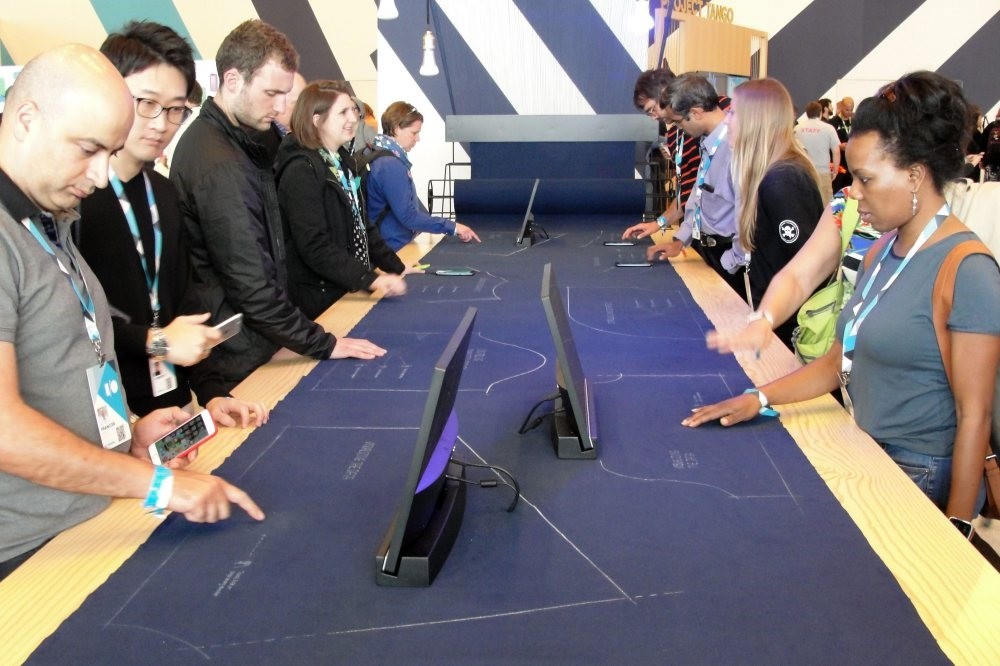 People touch specially woven project jacquard fabric, in the hands of a small Google team to control lights or computer screens during a demonstartion at Google's developers conference in San Francisco.
by May 06, 2017 12:00 am

The new trend for fashion designers is to take everyday wear and transform it using new technologies. One of the examples is Levi Strauss for Project Jacquard, an initiative with Google for so-called "smart" denim

A young man in a white T-shirt pulls on a dark blue denim trucker jacket, tucks his smartphone in an inside pocket and puts in ear headphones in his right ear. He mounts a fixed-gear bike with flat, slightly curved wide handlebars. Riding through the streets of San Francisco, he occasionally taps or swipes his right hand over the left cuff of his jacket, as the directions he is listening to continually pop up on the screen of this advertisement. It is an ad from iconic U.S. jeans maker Levi Strauss for Project Jacquard, an initiative with Google that the companies started two years ago for so-called "smart" denim. The future of the popular fabric was the focus at a recent international fashion fair in Paris - after all most believe the word denim derives from the French "serge de Nimes," a serge from the city of Nimes. The fair featured many wearable innovations such as a waterproof jacket with sunscreen bands and a cable in the pocket to recharge a cellphone, or jeans that keep your body temperature stable.

Once mainly the purview of athletic gear - with moisture-wicking shirts and trousers and then clothing that can track motion, heart rate, and body temperature - the new trend for fashion designers is to take everyday wear and transform it using new technologies. This is clothing made from specially woven fabric with touch-screen control capabilities that can be designed in such a way to visually stand out or go unnoticed depending on designers' wishes.

French-based fashion company Spinal Design, for example, has created jeans that can give wearers directions without having to whip out the mobile at every single intersection. Through bluetooth sensors stitched into the jeans' waistband, the smartphone stays out of sight.

"You put a destination into the pap (and) sensors will vibrate right if you need to turn right, left if you need to turn left," Spinal innovation director Romain Spinal told AFP. In 2015, the company from the eastern French town of Mulhouse designed a bikini that tells women when it is time to apply more sunscreen. The two-piece retails for 149 euros ($163) and comes with a small detachable ultraviolet sensor that, through a smartphone or tablet, sends a "sunscreen alert" when the sunbather's skin needs more protective cream.

The detector is calibrated to the wearer's skin type and how much of a tan she wants to get, and is "virtually devoid of any radiation," Spinal said.

The Spinal jeans, made in France, cost 150 euros and also have email notification capabilities.

"They will vibrate differently depending on whether the message received is from your family, your friends or work, in a way that you won't have to constantly check your email on weekends or on vacation," Spinal said.

On their end, Google and Levi expect to release their denim jacket sometime this year, but it will come with a hefty $350 price tag due in part to its special interactive fabric that allows the jacket's wearer to order various products online. Other international etch and fashion companies have also jumped on the "smart" denim bandwagon.

American designer Cone Denim for its part has blended its denims with technical textile fibres from equipment used on motorcycles - this to better tout the sturdiness of its clothes.
RELATED TOPICS