Isolation by the West fuels a tech startup boom in Iran 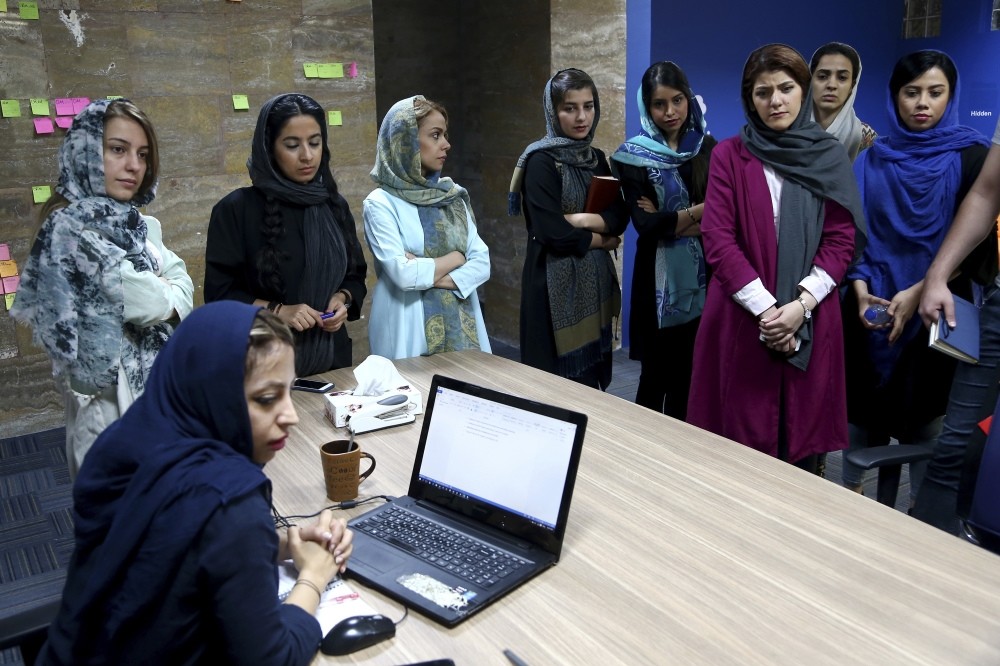 Staffers of the Bamilo online shopping site attend a meeting at their office in Tehran.
by Associated Press Jun 06, 2017 12:00 am

Mostafa Meisami has given up on the farming life, trading his old job raising cattle for a better-paying gig ferrying commuters through the notoriously traffic-clogged streets of the Iranian capital Tehran. The 38-year-old father-to-be plies his trade in a brand-new, locally assembled Chinese hatchback, scrolling for fares using an app on his Samsung smartphone. Yes, even in Iran, there's an app for that -and quite a few other things too.

The Islamic Republic remains in many ways cut off economically from the rest of the world. Big-name Western brands shun the market for fear of violating sanctions that remain in place even after the country's landmark 2015 nuclear deal with world powers. That means no KFC -just local upstarts like "Iran Fried Chicken" -or credit and ATM cards connected to global banking networks. Visitors to the country must carry in thick wads of dollars. Many popular social-networking sites like Facebook are blocked by government censors. Order from Amazon or call an Uber? Forget about it.

In their place, a surprisingly active tech startup scene has sprung up. It's driven by a growing number of Iranian millennials who see their country of 80 million people not as an isolated outcast but as a market ripe with opportunity. Among the fastest-growing companies in the digital transformation is Snapp, the ride-hailing app Meisami uses. He estimates he makes more than $900 working in a good month, pulling in a much larger cut per fare than he would driving for a traditional taxi-style car service. His hours are long -12 hours a day most days a week -but he likes being able to pick when and where he works.

"This opened a door to people like me who had financial problems," he said.

Launched in 2014, Snapp operates a sleek Uber-like app that runs off of Google Maps and has a launch page featuring the Tehran skyline. It boasts 100,000 drivers and has carried more than 5 million passengers on some 50 million rides, according to its enthusiastic CEO, Sharam Shahkar, 32. In addition to its basic service, Snapp offers premium rides in nicer cars as well as female-driven vehicles for women and families. In February, dozens of local taxi drivers angry over the competition gathered outside parliament and chanted "American Snapp should be destroyed" in an effort to link it wrongly to Iran's arch enemy, the U.S.

ts other businesses include a food-ordering app called Zoodfood and a hotel booking site known as Pintapin -a useful service in a country that most booking portals don't touch. The company's online shopping site Bamilo competes against Iran's biggest e-commerce site, Digikala , which ranks behind only Google and a local sports portal as Iran's third most-visited website, according to web traffic data site Alexa. Like Amazon, the sites sell everything from laptops and cellphones to clothes, kitchen supplies and cosmetics. But there are subtle differences too.Both sites are currently running promotions for the Islamic holy month of Ramadan, for example. Digikala even sells cars , including a 2017 Lexus hybrid SUV on offer for more than $90,000. And Iranians would not accept having their purchases left unceremoniously on the doorstep like in the U.S. They expect hand-to-hand delivery, said Afshan Samani, Bamilo's chief product officer. Figures released by Iran's central bank last month showed that online shopping jumped 34 percent and accounted for sales of more than $370 billion during the last Persian year, which ends in March. Nader Habibi, an Iranian expert on Mideast economies at Brandeis University in Massachusetts, said the rollout of 4G mobile connections and high-speed landline internet service over the past few years has fueled Iran's tech boom.