China cashing out as mobile payment soars to $5.6T 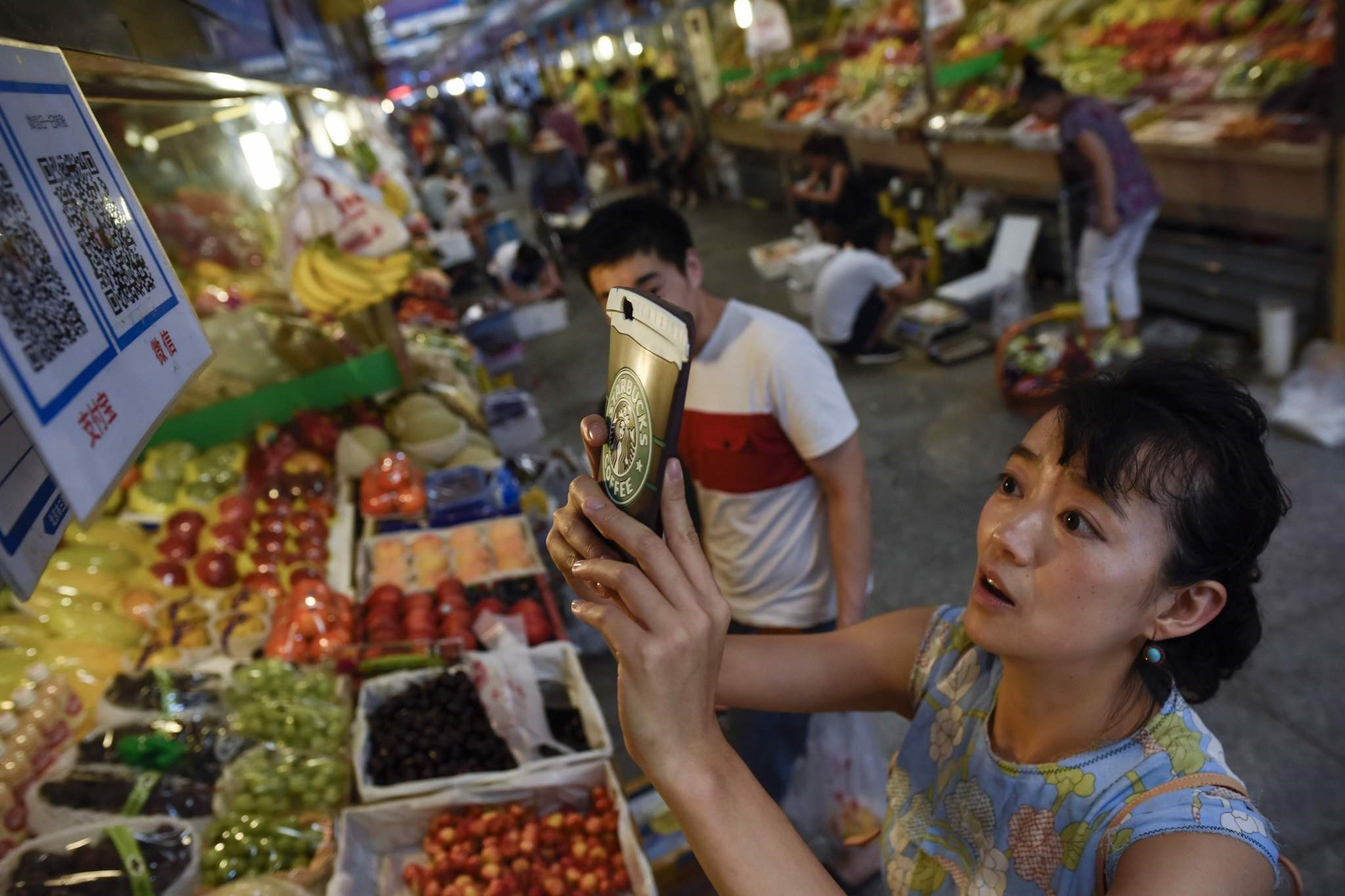 A woman makes purchases by scanning QR codes using her smartphone at a fruit stall in a market in Beijing.
by Jul 24, 2017 12:00 am

China was the first country in the world to use paper money but the soaring popularity of mobile payment has some analysts forecasting it could be the first to stop. The gross merchandise value of third party mobile payment rose to $5.6 trillion in 2016

Yang Qianqian holds out her smartphone to scan a barcode on the mobile of a vendor selling fresh fruit and vegetables at a bustling outdoor market in Beijing. The dance student is part of an explosion in the use of mobile payment platforms in China as consumers increasingly take out phones instead of cash to pay for everything from a coffee to a language class or a gas bill.

"Even though I have cash on me it's not convenient to get it when I am carrying a lot of bags," said Yang, 25, clutching plastic bags filled with pears, potatoes and watermelon.

China was the first country in the world to use paper money but centuries later the soaring popularity of mobile payment has some analysts forecasting it could be the first to stop. The gross merchandise value of third party mobile payment rose more than 200 percent to 38 trillion yuan (about $5.6 trillion) in 2016 from a year earlier, according to China-based iResearch.

The growth of the cash-free system has been supported by China's rapidly expanding e-commerce market as Chinese shoppers increasingly shun bricks and mortar stores.

"I think it's really very possible that China becomes the first or one of the first cashless societies in the next decade," said Ben Cavender, a director at China Market Research Group.

Cavender estimates China's mobile payment market is already 40-50 times larger than the United States. Alipay, started by e-commerce giant Alibaba and now owned by its affiliate Ant Financial, and WeChat Pay, which is built into Tencent's popular messaging service, have hundreds of millions of users between them and are China's dominant payment platforms.

In Beijing it is hard to find a product or a service that cannot be purchased with a mobile.

At the fresh produce market, stallholders display barcodes on tables laden with fruit and vegetables for customers like Yang to scan - though many shoppers appeared more comfortable with cash.

Some restaurants in the capital no longer accept bank notes while it is common for motorbike taxis, street food carts and hair salons to offer mobile payment. Mobile accounted for eight percent of the total value of retail payments in 2015 and is expected to reach 12 percent in 2020, according to a report published in April by U.N.-backed Better Than Cash Alliance.

But cash is still king in China - although less so than it used to be. The Better Than Cash Alliance expects cash's percentage of the value of retail payments to fall to 30 percent by 2020. It stood at 61 percent in 2010. A key attraction of mobile payment is convenience. People can carry little or no cash and avoid the problem of their debit or credit card being rejected due to the limited number of point-of-sale terminals in stores. China's relatively short history of using bank cards also makes consumers more open to new technology, said Martin Utreras, vice president of forecasting at eMarketer.

"In China a lot of people never had any financial instruments that were automated in any way and the first thing they had was mobile payment," he said.

But some have been reluctant converts to the cashless system. Among them is a 63-year-old woman surnamed Song who sells hand-knitted sunflowers and peashooters from the popular video game Plants vs Zombies in a pedestrian underpass in Beijing. She prefers cash but accepts mobile payment because some customers do not carry real money.

"Cash is more convenient for me because I'm getting older and have bad eyesight," she said, standing next to her bright-coloured ornaments neatly displayed on the ground.

Riding on their success, payment providers are expanding their businesses to offer consumer and business credit scoring, short-term lending and even investment products. The shift fits with the Chinese government's domestic agenda of boosting consumer spending and increasing access to financial services among ordinary people.

Alibaba and Tencent are also taking their technology - and deep pockets - abroad as they target cashed-up Chinese tourists and nascent payment markets in developing countries. Tencent earlier this month teamed up with German payments company Wirecard to launch WeChat Pay in Europe where Alipay is already available.