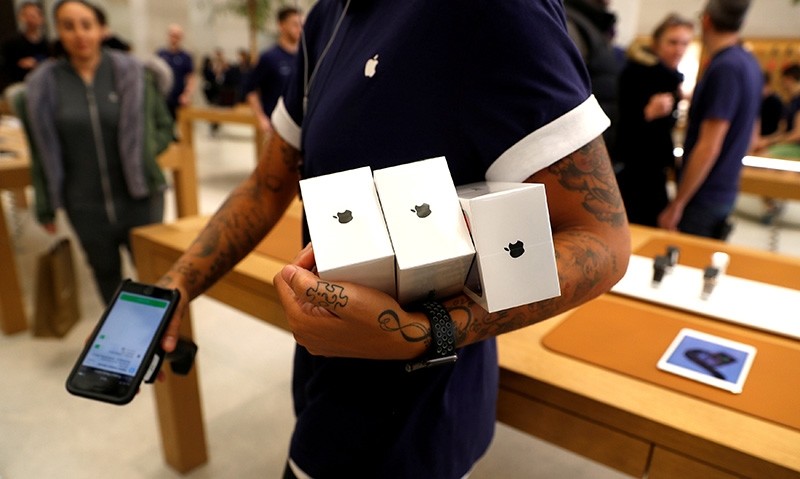 A survey by IDC showed Apple -- which reported its quarterly data Thursday -- led all vendors with 77.3 million iPhones sold, giving it a 19.2 percent market share.

Even though Apple's fourth-quarter unit sales were down 1.3 percent from a year earlier, it was able to move ahead of South Korea's Samsung, whose 74.1 million devices sold gave it a market share of 18.4 percent, IDC said.

Huawei held the number three position with a 10.2 percent market share, followed by fellow Chinese makers Xiaomi and Oppo, with 7.0 and 6.8 percent, respectively, according to IDC.

Overall smartphone sales were down 6.3 percent with 403.5 million handsets shipped, according to the survey.

IDC said the data showed consumers appeared in no rush to upgrade to the most expensive flagship smartphones from Apple and Samsung.

"The latest flock of posh flagships may have had consumers hitting the pause button in the holiday quarter," said Anthony Scarsella, an IDC research manager.

Scarsella said these high-end devices "proved to be more of a luxury than a necessity among upgraders."

IDC analyst Jitesh Ubrani said that as the top brands expanded their offerings, "brands outside the top five struggled to maintain momentum."

Samsung, which reported a 4.4 percent decline in the fourth quarter, remained the top smartphone vendor for the full year with a 21.6 percent market share, to Apple's 14.7 percent, IDC said.

Overall smartphone sales for 2017 were virtually flat -- down 0.1 percent at 1.47 billion units, the report said.

Huawei has been seeking to grow its market share but faced a recent setback by failing to strike deals with US carriers, following concerns voiced in Washington over the Chinese maker's ties to the Beijing government.

A separate survey from Strategy Analytics found similar market share for smartphone vendors but found a nine percent drop in fourth-quarter sales, described as the largest decline in the smartphone era.

"The shrinkage in global smartphone shipments was caused by a collapse in the huge China market, where demand fell 16 percent annually due to longer replacement rates, fewer operator subsidies and a general lack of wow models," said Linda Sui of Strategy Analytics.