SpaceX's new rocket to take off with sports car on top 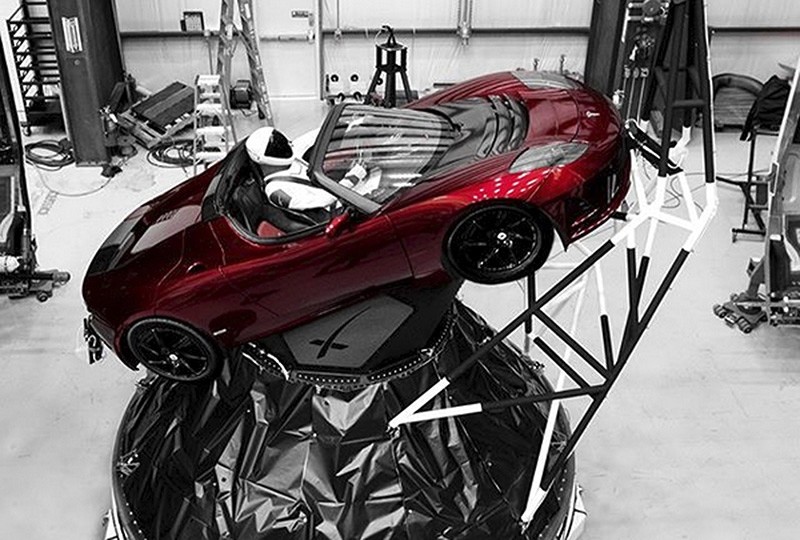 A mannequin Starman sits at the wheel of a Tesla Roadster in this photo posted on the Instagram account of Elon Musk, head of auto company Tesla and founder of the private space company SpaceX (AP Photo)
by Associated Press Feb 06, 2018 12:00 am

SpaceX's big new rocket stood ready to blast off on its first test flight Tuesday, as crowds began gathering at daybreak for the afternoon launch debut.

As the sun rose at Kennedy Space Center, bright lights illuminated the Falcon Heavy, gleaming white on the same launch pad used by NASA nearly 50 years ago to send men to the moon.

The Heavy is set to become the world's most powerful rocket in use, with double the liftoff punch. It's equipped with three boosters and 27 engines designed to provide about 5 million pounds of thrust.

To add to the excitement, SpaceX chief Elon Musk has his cherry-red Tesla Roadster on board. He's striving to put the car into a perpetual solar orbit reaching out as far as Mars, the focus of all his rocket efforts as he aims to establish a city there in years to come.

Musk — who also heads up the Tesla electric carmaker — said he wanted to add some dramatic flair by launching his sports car into space. Normally the payloads on test flights include non-valuable items like steel or concrete slabs or mundane experiments.

In the driver's seat of the convertible is "Starman," a dummy in a spacesuit, with one hand on the steering wheel. David Bowie's "Space Oddity" will be playing on the soundtrack at liftoff.

The launch was expected to attract thousands — a crowd not seen since NASA's last space shuttle flight seven years ago. While the shuttles had more liftoff muscle than the Heavy, the all-time leaders in both size and might were NASA's Saturn V rockets, which first carried astronauts to the moon in 1968.

Scores of journalists packed the space center to witness not only the launch but the return to the land of two of the Heavy's three first-stage boosters, strapped side by side by side for takeoff.

Just minutes after liftoff, the two outer boosters — recycled from previous Falcon 9 flights — will attempt vertical landings at nearby Cape Canaveral Air Force Station. The central core booster will continue upward, then also peel away and target a touchdown on a floating platform in the Atlantic, just offshore.

If it reaches orbit, the Roadster will spend several hours traveling through the highly charged Van Allen radiation belts encircling Earth. That will be a risky time as well, according to Musk, because the fuel necessary for the ignition of the final thruster to send the car on its proper path toward Mars could freeze up, or the oxygen could vaporize. In addition, the car will be zapped repeatedly by radiation.

No matter what happens — a rocket explosion at the pad or some other calamity — Musk told reporters Monday his company has done everything possible to maximize success and he's at peace at whatever happens. He's had plenty of experience with rocket accidents, from his original Falcon 1 test flights to his follow-up Falcon 9s, one of which exploded on a nearby pad during a 2016 ignition test.

While it will be "a really huge downer if it blows up," Musk said, the hope is that any failure comes far enough into the Heavy's flight "so we at least learn as much as possible along the way." The Heavy already has customers eager to launch hefty satellites, including the U.S. Air Force. An explosion, especially at the pad, could set the program back several months, according to Musk.

Musk said he'll consider it a win if the rocket at least clears the launch tower.

As for his car, he said with a chuckle, it's the least of his worries.

He's already making plans for an even bigger, mightier rocket that will carry astronauts, not just cargo like the Heavy, along with the infrastructure that would be needed to set up camp on the moon and asteroids, and eventually build the city he envisions on Mars.