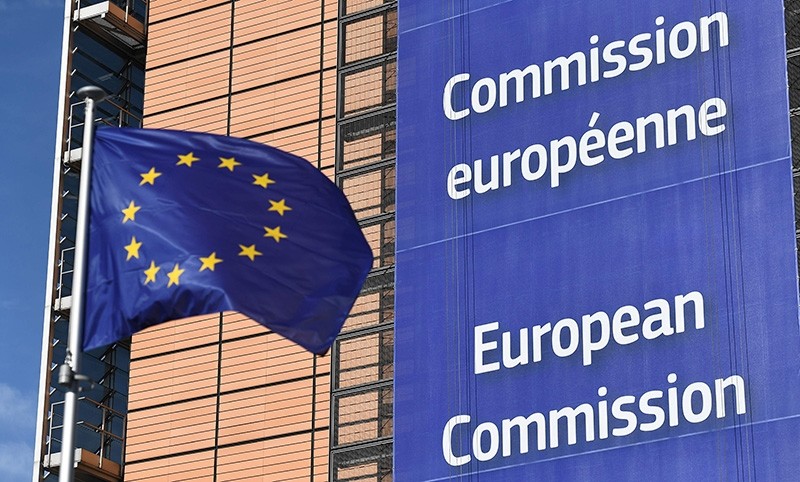 A picture taken on March 14, 2018 shows a European Union flag next to the European Commission headquarters in Brussels, adorned by a banner displaying its name in French, among others European languages. (AFP Photo)
by Daily Sabah Mar 19, 2018 12:00 am

The European Commission is mulling a 3 percent corporate income tax on large digital companies that operate in the European Union but are based elsewhere, such as Twitter and Google's parent company Alphabet, according to circulating draft proposal.

The draft, circulated Friday and first seen by Bloomberg, is expected to be proposed on Wednesday. It outlines how the bloc would gain through a targeted levy on gross revenues, on an industry accused of "freeloading."

This draft would be a short-term solution, with a more comprehensive approach expected to follow.

The planned tax would include companies offering digital services such as advertising or selling user data, like Facebook, as well as multisided digital platforms that allow users interact with each other and directly exchange goods and services, such as Amazon.

The parameters of the proposal could change before approval, with the taxation rate falling anywhere between 1 and 5 percent.

While the bloc is seeking methods to capture income from the digital outsiders, the path to do so has not been straightforward. Some countries warn the new tax could dampen digital use and incentivize the purchase of products outside of Europe.

To become law, the proposed levy will need unanimous approval from all 28 EU members, meaning one dissenting country could block its approval.