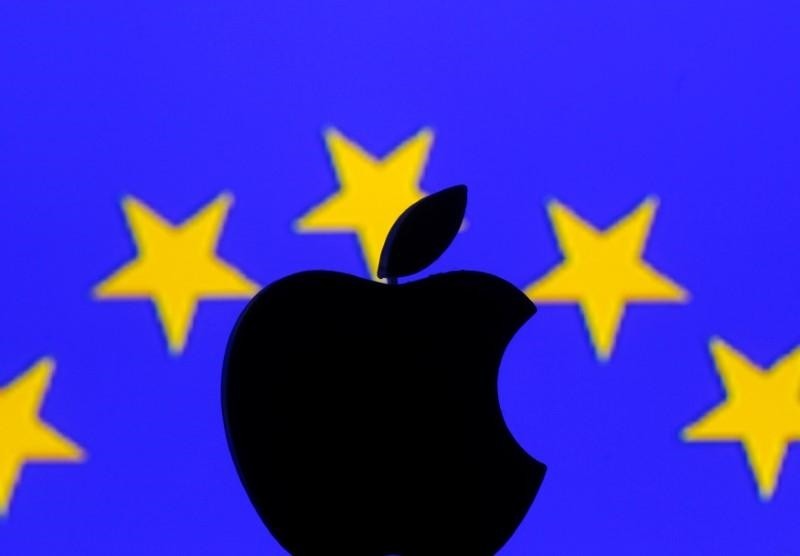 A 3D printed Apple logo is seen in front of a displayed European Union flag in this illustration taken September 2, 2016. (REUTERS Photo)
by Compiled from Wire Services Apr 23, 2018 12:00 am

The European Union is opening an investigation into Apple's acquisition of song-recognition app Shazam to make sure it doesn't limit consumer choice too much.

Apple said in December it would buy the maker of the popular song-recognition app, which Apple's digital assistant Siri had been competing with.

Among other issues, Vestager's office also worries that Apple would get easy access to sensitive consumer data and lure customers from competitors to its own services.

The commission has until September 4 to conclude the investigation.

The investigation of Apple's Shazam buyout becomes yet another source of contention between Brussels and Silicon Valley as the European Union adopts tougher regulation of the likes of Facebook, Google and Amazon.

The European Commission said in February it would consider an inquiry into Shazam at the request of EU states Austria, France, Italy, Spain and Sweden, and non-EU Norway and Iceland, which form part of the affiliated European Economic Area.

On its own, the deal was too small for the European Commission -- the EU's executive arm and anti-trust enforcer -- to launch a probe by itself.

Instead it had to wait for Austria to lodge an initial request, which was followed by the other states.

The commission said it was concerned that the takeover would allow Apple to gain access to commercially sensitive data about customers of its rivals.

Apple could then use this data to better target customers of other streaming services and help develop its own offer, which has struggled to gain traction since launching to great fanfare in 2015.

In addition, the EU will also investigate whether Apple Music's competitors would be harmed if Apple were to discontinue links from the Shazam app to rivals.

The price of the acquisition has not been publicly disclosed, though the Financial Times reported at the time that it was around 400 million dollars.

Shazam, which was founded in 1999 in the early age of online music, has offered a solution to a longtime agony of listeners -- putting a name to elusive songs. With a click, the app identifies tracks playing on the radio, at parties or as background music.

But Shazam has struggled to find a way to make money off its technology, even as it said that it had reached one billion downloads on smartphones last year.

Shazam only recently announced it had become profitable, thanks to advertising and steering traffic to other sites such as Spotify and Apple Music.

The technology is also no longer quite as novel, with Shazam facing rivals such as SoundHound and with smartphones capable of ever more advanced recognition functions.