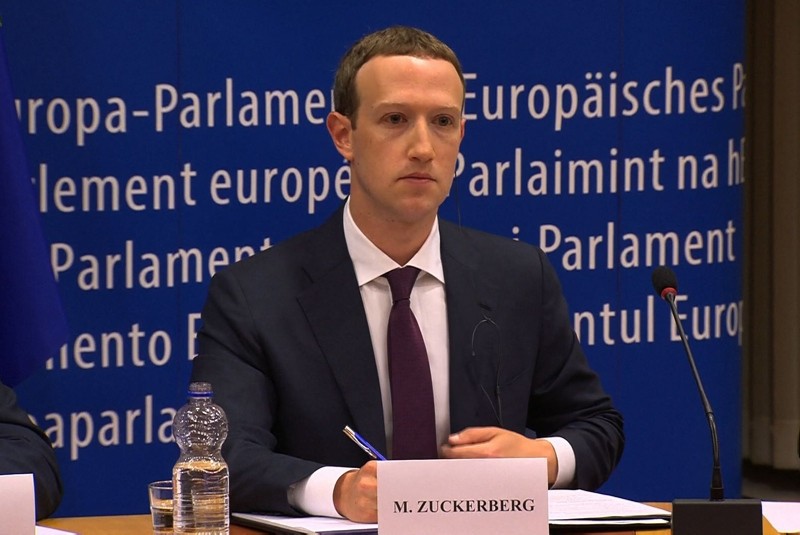 This video grab taken from the European Commission channel EBS, shows Facebook CEO Mark Zuckerberg during his audition at the European Parliament on the data privacy scandal on May 22, 2018 at the European Union headquarters in Brussels. (AFP Photo)
by French Press Agency - AFP
May 22, 2018 12:00 am

Facebook chief Mark Zuckerberg apologized to the European Parliament on Tuesday and said the social media giant is taking steps to prevent a repeat of a massive breach of users' personal data.

Zuckerberg also pledged to keep investing in Europe as he made the latest stop on a tour of contrition over the Cambridge Analytica scandal that began in the US Congress in April.

Zuckerberg told the livestreamed hearing in Brussels that it has become clear in the last two years that Facebook executives "haven't done enough to prevent these tools from being used for harm".

"And that goes for fake news, foreign interference in elections or developers misusing people's information. We didn't take a broad enough view of our responsibility," he said.

Facebook admitted that up to 87 million users may have had their data hijacked by British consultancy Cambridge Analytica, which worked for US President Donald Trump during his 2016 campaign.

The Silicon Valley giant has told the European Commission, the EU's executive arm, that the personal data of up to 2.7 million Europeans may have been sent inappropriately to Cambridge Analytica, which has since filed for bankruptcy in the US.

Zuckerberg said Facebook was bringing in new features including a special "clear history" button that would allow them to delete any cookies or browsing history details it stores.

He also told the leaders of the European Parliament's political groups that Facebook would make fresh investments to protect its users in the wake of the scandal.

"It's going to take time to work through all of the changes we must make. But I'm committed to getting it right, and to making the significant investments needed to keep people safe," he added.

"I expect this will significantly impact our profitability. But I want to be clear: keeping people safe will always be more important than maximising our profits."

Zuckerberg meanwhile admitted that Facebook had been "too slow to identify Russian interfering" in the 2016 US presidential ballot, but was working with European governments for future elections.

Facebook also serves a valuable social role with tens of thousands of people having used its Safety Check feature "after the recent terrorist attacks in Berlin, Paris, London and here in Brussels", Zuckerberg said.

The Facebook chief staged a U-turn on Monday and agreed to the hearing being webcast, in a further bid to limit the fallout from the data scandal.

Angry EU lawmakers had objected to initial plans for it to be held behind closed doors.

In April, Tajani rejected Zuckerberg's initial offer to send a more junior executive in his place, saying it would be a "big mistake" for him not to answer questions from an elected body that regulates a market of 500 million people, many of them Facebook users.

Tajani said MEPs want to know if "people used data for changing the position of the citizens", including during the shock 2016 referendum for Britain to leave the EU.

Objecting to a closed-door hearing, MEPs insisted Zuckerberg face a grilling similar to his 10-hour interrogation in US Congress last month.

Guy Verhofstadt, who heads the ALDE liberals group in parliament, dropped his plan to boycott the event now that it would be "transparent and public".

Inviting Europeans to send him questions for Zuckerberg, Verhofstadt, a former Belgian prime minister, tweeted that EU citizens "deserve to hear the truth".

EU Justice Commissioner Vera Jourova recently paid Zuckerberg a backhanded compliment for having admitted that the Facebook scandal showed the need for strict new rules despite the reluctance of US internet giants.

The EU's General Data Protection Regulation (GDPR), which comes into effect on Friday, aims to give users more control over how their personal information is stored and used online, with big fines for firms that break the rules.

Zuckerberg, who has repeatedly apologized for the massive data breach, told the US Congress in April that the more stringent EU rules could serve as a model globally.