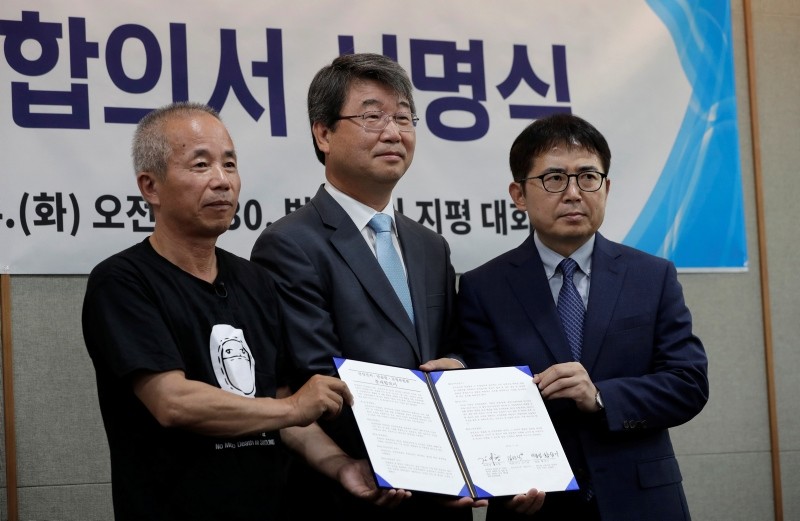 Samsung Electronics and a group representing ailing Samsung computer chip and display factory workers said Tuesday they have agreed to end a yearslong standoff over compensation for deaths and grave illnesses among Samsung workers.

Samsung and Banolim said they will unconditionally accept terms of compensation and apologies to be drafted over the next two months by a mediator.

Banolim said it will stop its protests outside Samsung buildings, where its supporters camped out for nearly three years to demand that Samsung apologize for making workers sick and provide compensation for their illnesses.

The agreement represents a breakthrough in a more than decade-old civic movement that raised awareness about the health risks from toiling in the lucrative semiconductor industry.

The grassroots movement was started by Hwang Sang-gi, a taxi driver who refused to accept a settlement when his daughter Yu-mi died of leukemia in 2007 at the age of 23 after working at a Samsung chip factory. Hwang's search for the cause of Yu-mi's death galvanized a broader movement to hold businesses and the government accountable for safety lapses in the chip and display industries, which use huge amounts of chemicals.

"It's regrettable that for more than 10 years we could not solve the problem of workers who had no money and no power and died from diseases due to chemicals," Hwang said at a signing ceremony attended by the mediator and Samsung, wiping away tears. "But it is fortunate that we found a way to solve the problem of industrial diseases at Samsung."

Judges have acknowledged the need and the importance of using state funds to aid the sickened workers even when they were unable to prove why and how they became ill, sometimes due to a lack of information about the chemicals they were exposed to.

Kim Sunsig, a senior vice president at Samsung Electronics, said accepting the proposal without condition was a difficult decision for Samsung.

"Only the complete resolution of the problem would be a consolation to the sickened workers and their families and also valuable for the society," Kim said. "We will actively cooperate with the mediation committee."

It's a step closer to resolving one of the company's biggest headaches as its leader Lee Jae-yong, a vice chairman and a grandson of Samsung's founder, solidifies his leadership.