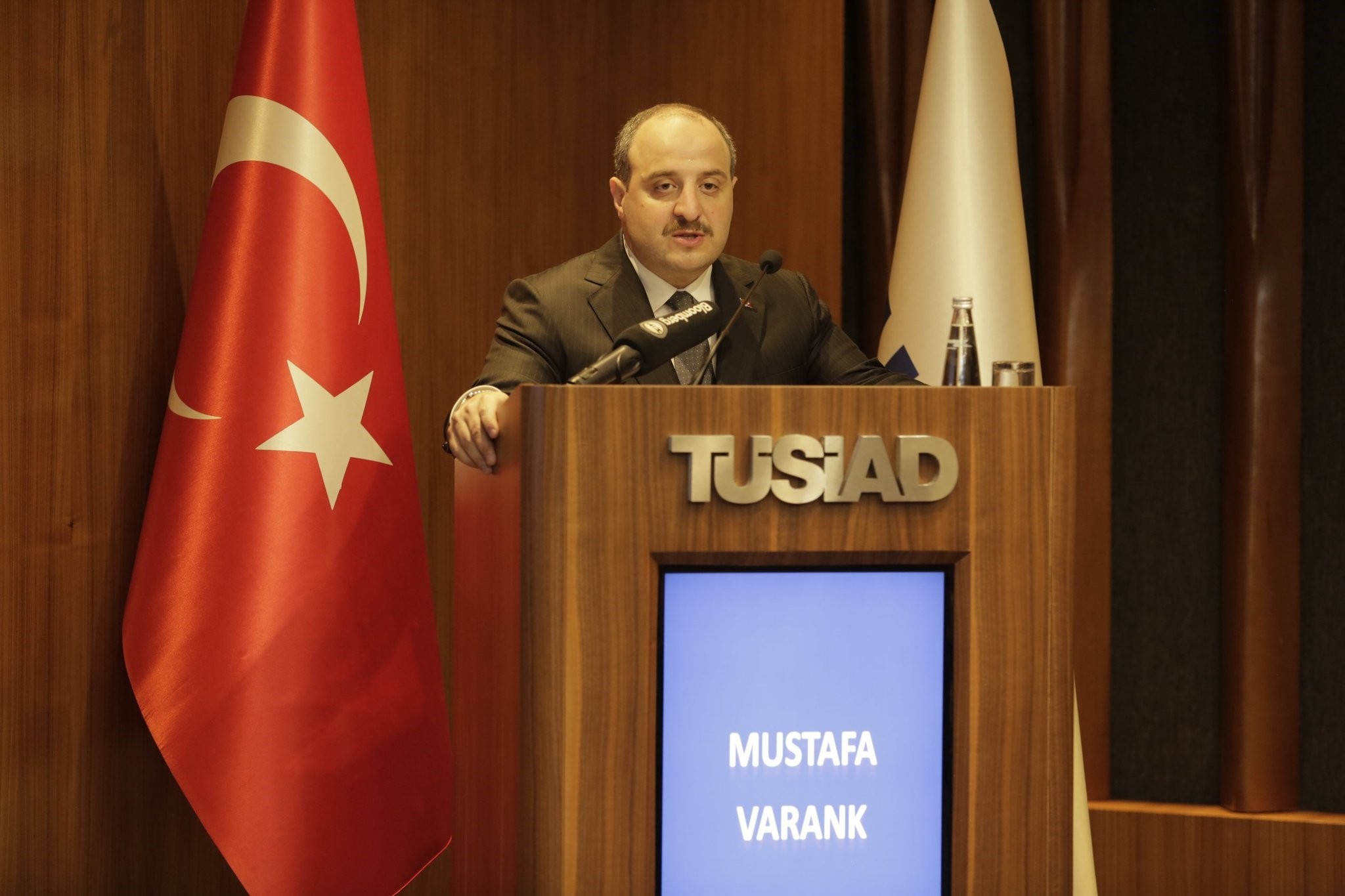 Industry and Technology Minister Mustafa Varank delivers a speech at the fourth u201cDigital Transformation Days in Industryu201d at the headquarters of the Turkish Industrialists and Businessmen Association (Tu00dcSu0130AD), Istanbul, Sept. 18.
by Daily Sabah Sep 19, 2018 12:00 am

Turkey is on the way to establish digital transformation centers for its industrialists, Industry and Technology Minister Mustafa Varank announced yesterday. "We will open our model factories in Ankara and Bursa in November," Varank said during his speech at the fourth "Digital Transformation Days in Industry" at the headquarters of the Turkish Industrialists and Businessmen Association (TÜSİAD) in Istanbul. Industrialists will receive hands-on experience training and consultancy services in these centers, according to the minister.

"They will learn the theory and practice of digital transformation in real production environments. In this context, we are opening our model factories in Ankara and Bursa in November. In addition, planning for model factory projects in İzmir, Gaziantep, Mersin, Konya and Kayseri was done and funding sources were found. The model factories were also part of the 100-day Action Plan announced by the President Recep Tayyip Erdoğan. In the model factories, the application stages of the doctoral and master's programs related to the industry can be realized. Thus, public-industry-university cooperation will be put into action in a concrete way," Varan explained.

Over the last six years, the Scientific and Technological Research Council of Turkey (TÜBİTAK) has provided a TL 1.6 billion ($250 million) for research and development (R&D) and Innovation Project support for the development of the technologies with local resources that serve the digital transformation of the industry, according to the technology minister, who said 21 percent of the support went to the projects related to electronic circuits and microelectromechanical systems. He said this figure was followed by communication systems with a share of 20 percent and that the artificial intelligence and robotic-mechatronics fields received 15 percent each.

"This support will, without doubt, continue in the upcoming period," Varank noted, adding that they will continue to invest in digital communication infrastructure, especially in 5G.

"We care about the security of the digital world and we are focused on security risks, confidentiality and threats in the information and communication technologies. To achieve this, support for solution partners is on our agenda. Successful digitalization is possible with data collection and much more efficient use. For this purpose, developing national solutions in cloud technologies will be one of our activities," he added.

Varank stressed that the Turkish home appliance industry is the seventh largest exporter in the world and ranks third in Europe in exports. For further growth in the sector, the minister underscored the importance of integrating the developments in smart home practices in the sector and locally developing them.

One of the aims of the ministry, Varank added, is to diversify domestically developed software products and increase their quality. "We will continue to provide financing for the software sector via technoparks, R&D centers, TÜBİTAK and The Small and Medium Enterprises Development and Support Administration (KOSGEB)," Varank said.

"As the public sector, we are going to launch a new initiative to promote the use of locally developed software products," the minister said and added that it will take regulatory steps for the procurement of information technology products from local suppliers.

The ministry also plans to provide a support package for those businesses that use locally developed software products, Varank announced.

Stressing that global competition conditions are reshaping, Varank said: "We are now talking about an opportunity that will increase productivity in all sectors at the same time. Thus, we cannot think of Turkey as separate from the entire transformation process." He remarked that Turkey had been exposed to many attacks inside and out, "but it has always continued on its way much stronger."

"Turkey has major goals and ideals. We want to be among the 10 largest economies in the world in 2023. Of course, we need a paradigm shift for this," he added.

Explaining the future of this change from the perspective of production, Varank said: "We can achieve high and sustainable growth rates with policies that will increase our competitiveness and realize structural transformation in production. We will follow our own road map instead of copying the road maps of other countries such as Industry 4.0 and Society 5.0. With the emphasis on national technology and strong industry, we aim to develop high value-added areas and subcomponents of these areas nationally and originally. We will make good use of the opportunities brought by the paradigm shifts and give priority to the work that targets five to 10 years from now. Of course, when applying the production models required for the time frame, we will progress by seeking out opportunities, tools and shortcuts that will lead us forward."