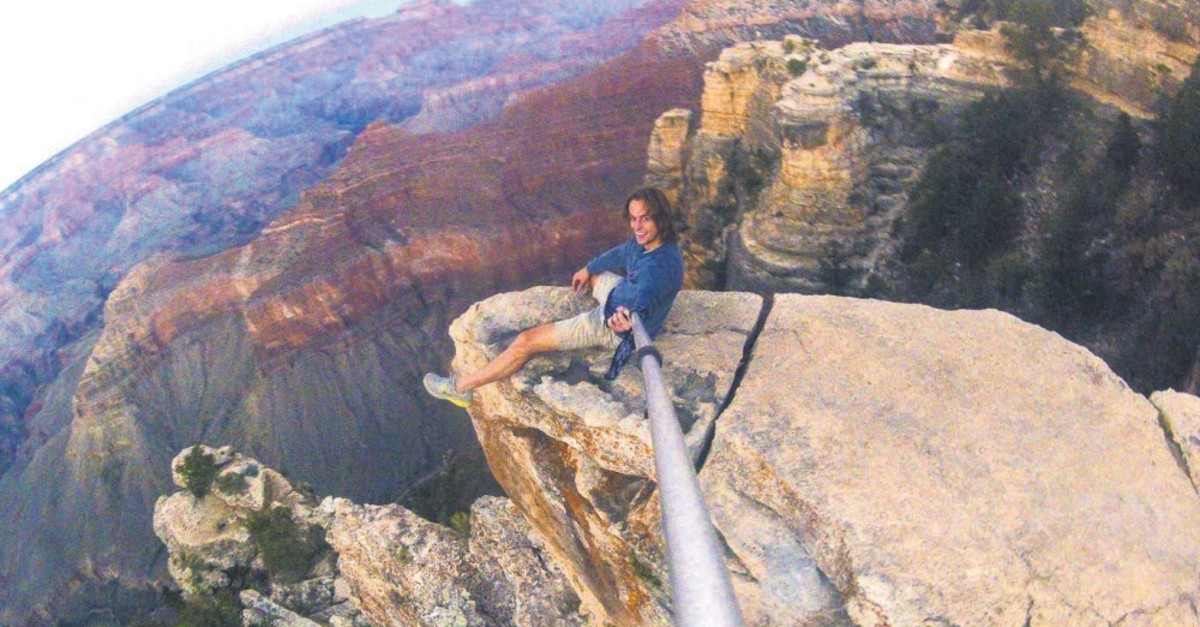 The selfie has become a dangerous trend as hundreds of people have reportedly to been killed due to selfie attempts.
by Şule Güner Jul 10, 2019 12:11 am

Since it became a part of our lives with the introduction of front cameras on smartphones, selfies have turned into more than a photo of yourself. Now, tech companies aim to cash in on it

Everyone, regardless of age group, knows what a selfie means. There is even a selfie economy called "experience economy." A selfie is so important for both our social and business lives that people even sacrifice their lives to get a good selfie. According to the Journal of Family Health and Medicine in the U.S., at least 259 people, most of them in India (and then Russia, the U.S. and Pakistan respectively), lost their lives by trying to take a selfie between 2011 and 2017.

It has been 16 years since the selfie came into our lives. Sony Ericsson introduced the reverse camera in the Z1010 model for video business meetings. It has become a tradition to put front facing camera in mobile phones since. The selfie economy has grown so much that electronic-mobile device producers aim to turn this culture into a new commercial one by developing mobile phone cameras with artificial intelligence (AI).

Roberta Cozza, one of the analysts at U.S.-based research company Gartner, commented that a new era will be opened with AI, and this technology will offer a chance to users to scan those around them. It is expected that mobile device producers, especially Far Eastern companies, will follow on this road. We can show the collaboration of Chinese technology giant Huawei with German Leica, one of the brands that comes to mind when traditional cameras are mentioned, and the selfie lens that was developed by another Chinese brand Xiaomi and hidden under the phone screen as key examples.

South Korean Samsung makes the camera recognize and classify the things around it by combining the power of AI voice assistant with augmented reality (AR) thanks to its "Bixby Vision" feature that it installed in new smartphones.

This technological feature takes baby steps but it is expected that it will create a new method of shopping in the next few years. Carrying out the deep learning method, it is the mobile phone version of the goal of offering shopping options by reading consumers' behavioral models, on which technology producer brands have been working on for nearly five years.

Even if Turkey is a lucky country in terms of geography and is not exposed to natural disasters much, the continuation of natural life in oceans, especially in the North Pole and Amazon, is an essential global issue. Funded by the European Union (EU), the iAtlantic project will try to understand what effect climate change has on sea creatures by using existing advanced technologies, especially AI. The work will be conducted over four years and high-technology devices including robot submarines will create a digital map in a large section reaching from the poles to South America. The results that will be obtained from this research will be shared with the related giants, and the current situation in the oceans and which creatures are endangered will be revealed.

Stating that seawater temperature is the biggest indicator of climate change, professor Murray Roberts from the University of Edinburgh said that the seas become more acidic as they get hotter and this means that sea creatures cannot breathe.

While the predicting talent of AI continues to step in vital issues like climate change and weather forecast, the Netherlands-based Water, Peace, Security (WPS) predicts in which regions there will be conflicts because of water scarcity. WPS developed a warning application for a potential crisis by examining social, economic and demographic data after following water sources in the world.

This application, which can estimate more than 75 percent of the conflicts in the Inner Niger Delta of Mali in the test phase, aims to limit the effect of climate change on water. WPS authorities said that applications that have been developed to predict water conflicts to date were not successful and stated that they used machine learning and big data analysis techniques in their application. Charles Iceland from the World Resources Institute, who works on the system that WPS made, says that they examine the situation of water sources from the satellite images of National Aeronautics and Space Administration (NASA) and the European Space Agency (ESA), and added, "Machine learning finds solutions that people cannot find by looking at data from government, international organizations and charitable organizations in addition to satellite imagery." Iceland says that this technique is primarily used as an early warning system, and secondly, it allows research on why water resources are running low.