Five out of the eight graduates from the Istanbul Chamber of Commerce's Information Commercialization Center Winglobal project have qualified to go to Silicon Valley. This includes RobustDye, which extends the lifespan of road lines, and Flightmax, which provides safety for parachute jumpers

The support provided by the Istanbul Chamber of Commerce (İTO) to startups gearing up for global competition is increasing.

The Winglobal: Born Global Startups project, which will strengthen Istanbul's entrepreneurial ecosystem and increase the city's global competitiveness and regional gravity, has passed its first graduates.

The Information Commercialization Center (BTM) sends its entrepreneurs to the U.S.' Silicon Valley as the first step in globalization within the scope of the Winglobal project. Five of the eight graduates from the Win global program now have the chance to go to Silicon Valley and present their projects to angel investors in the U.S. "Our Information Commercialization Center has now made a new addition to its global goals and international projects with the Winglobal project. I believe that this project has taken us one step closer to the goal of supporting global startups to exit from Turkey," İTO President Şekib Avdagiç said in his speech at the event.

"If you do not encourage innovative ideas and bring them to market, you become the market for other countries. Here at the Information Commercialization Center, we help the talents and ideas within us prepare for a global and universal league." "To show that our goal is a global quality, we named our project Winglobal: Born Global Startups," he continued. "In other words, we aimed for Turkey to have global companies. Thus, we wanted to go with the theme of 'Win Global,' 'Fly Global.' We wanted to increase the global competitiveness and regional attraction of the Istanbul economy to the top."

In addition to this project, Avdagiç stated that the BTM 1,000 project was initiated with the opportunities and synergy provided by the new location of BTM. "In other words, the process of commercialization of 1,000 startups has started. I believe that with this project, we will be able to encourage more investments in startups and become the address of the first unicorns to exit from Turkey," Avdagiç said. "With this project, innovative and technological ideas and subversive business models of Turkish entrepreneurs will be assertive in the competition in the global arena because we have planned Winglobal as a project that will increase the global competitiveness and regional attraction of the Istanbul economy."

Apart from angel investors, entrepreneurs also aim to continue their projects successfully in the global market by finding opportunities to sell and establish business partnerships in the global market. The Winglobal project, coordinated by the BTM, which was established by the İTO to promote entrepreneurship, was realized in conjunction with İTO, the Istanbul governor's office, Istanbul Commerce University, Teknopark Istanbul and İSTKA. Some 20 startups were accepted in the first stage of the project, whose target group was 40 Born Global Startups. The startups went through an intensive program for 16 weeks. This program is different from other programs because entrepreneurs do not develop a product but focus on business models. At the end of these 16 weeks, eight startups that successfully completed all processes were eligible to meet investors.

Speaking at the event, BTM Director İbrahim Elbaşı said Winglobal: Born Global Startups project was launched in February, stressing they aimed to facilitate the globalization processes of the entrepreneurs involved in this program and to ensure their access to both domestic and international angel investment networks. "One of our goals with this project was also to strengthen Istanbul's entrepreneurial ecosystem. Within the scope of this program, we aim to take our entrepreneurs to Silicon Valley and bring them together with investors in the U.S," Elbaşı said, recalling that they completed the first phase with 20 startups, and in September, five successful startups would go to Silicon Valley. "Our goal is to bring out the first Turkish unicorn as our Avdagiç said. We believe that with this project, we will create billion-dollar companies, open up to the global arena, and produce local and national values," he noted.

Founded by Rasim Üner, BrandFace offers a video sharing platform that rewards creativity that the brand and its consumers can act together to produce unique branded content, enabling smart content to be produced on digital communication platforms on which billions of dollars are spent.

After a traffic accident at a pedestrian crossing, Cavid Bayramlı realized that pedestrian crossing lines had disappeared. Bayramlı, who was treated for three months after the accident, established the RobustDye startup and developed a long-lasting technological road strip paint with a nanotechnological infrastructure. The paint is also used by Istanbul Metropolitan Municipality.

Established to reduce the risk of sports such as paragliding that thousands of people try for the first time every year, Flightmax offers a simple and easy-to-use solution. Bilal Kubilay Keskin, who developed the solution leased according to the number of uses, offers parachute jumpers a chance to fly longer and increases their probability of survival in case of an accident.

With Contaxer, Hasan Can Orhan aims to solve the problems faced by real estate agents in customer and property management. This platform, which enables real estate agents to provide faster and more comprehensive services, will evaluate the growth opportunities abroad with the support it receives. 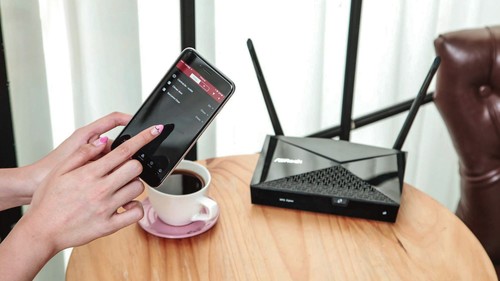 Türk Telekom made the first trial run of Wi-Fi 6 technology to offer high speed fixed internet wirelessly to its customers at home. All products with Wi-Fi 6 support will benefit from fast connectivity, and Wi-Fi 6 compliant products will save battery life.

The first trial run for Wi-Fi 6 technology, which accelerates wireless internet connections at home and in the office, was carried out. Türk Telekom reached 2.5 times faster speeds than the previous generation 802.11ac with Wi-Fi 6 (802.11ax) technology tried for the first time in the test laboratory established in the Acıbadem campus. Türk Telekom is the first operator to try the sixth generation Wi-Fi standard Wi-Fi 6 technology for the first time in Turkey and successfully perform this test. "After the Wi-Fi 6 works, Türk Telekom will carry the high speeds it provides with 5G and fiber broadband wirelessly to home and office spaces," Türk Telekom Technology Assistant General Manager Yusuf Kıraç said.

Thanks to the technological features of the new modems that will support Türk Telekom Wi-Fi 6, it will be able to provide wireless internet access to a wider coverage area at higher speeds. Moreover, Wi-Fi 6 provides lower power consumption than older generations, thus offering longer battery life for Wi-Fi connected smartphones and portable computers. So, devices will not have to spend more battery life for connection. Türk Telekom Chief Technology Officer Yusuf Kıraç announced that Türk Telekom tried the new wireless communication standard Wi-Fi 6 technology with Intel for the first time in Turkey. "With the expansion of Wi-Fi 6-modems, smartphones, and portable computers and increased wireless network performance, all kinds of business, entertainment, security, smart home concept applications can be used over high-capacity wireless networks," Kıraç said. "By taking the first and most important step in this direction, Türk Telekom will once again demonstrate its leadership in technology and innovation and will be proud to introduce new technologies to its customers."

8K videos no longer a dream

Thanks to Türk Telekom's new generation wireless modems, which will be customized for customers expecting high speed and comfort, delays and interruptions in front of many popular entertainment and business tools such as interactive online games, video conferences, virtual reality (VR), augmented reality (AR) and 4K-8K video transmission will become history. Thanks to the high-speed Wi-Fi 6 modems, delays will improve by 75%. Besides, Wi-Fi 6 technology will increase the capacity of the device supported by the previous generation fourfold, thus allowing the trouble-free operation of all internet of things devices that we will encounter in all areas of life.

Co-working spaces that offer many privileges for entrepreneurs, freelancers and startups save on extra costs such as workplace rentals, dues, office equipment, Wi-Fi service, photocopying costs, withholding and company line. Servcorp Turkey Director Damla Özgönül stated that the co-working spaces are a blessing of the era we live in. "Employees can cover all transactions by paying a membership fee at the most central and reputable locations in the city for a coffee fee per day. Entrepreneurs are now getting rid of various expenses such as rent, dues, withholding, electricity, and water, which are among the office expenses, thanks to the co-working spaces. Özgönül also pointed out that co-working spaces became not only a trend but also a necessity in today's economic conditions.

The digitalization of business life has left behind the conventional office approach. As a result of the work carried out in the digital environment and the increase in office costs, businesspeople are switching to co-working spaces. Co-working spaces that offer office rental opportunities hourly, monthly and yearly for businesspeople ease the economic workload with alternative business solutions. It offers free tea and coffee, as well as free communal equipment such as high-speed Wi-Fi, photocopying and printers. This system also speeds up business with personal solutions such as common workspaces, which provide legal work addresses, courier services, and secretaries.

Office and staff costs are high for both freelancers and corporate firms. According to research, the co-working spaces cost at least 40% less than traditionally established offices. This huge difference in cost attracts many businesspeople from startups to international companies. Besides, nowadays co-working spaces have become a popular platform for the socialization of young professionals, as well as a suitable platform for the growth of enterprises.