Canada's Shapovalov fined $7,000 for hitting umpire in the face with tennis ball 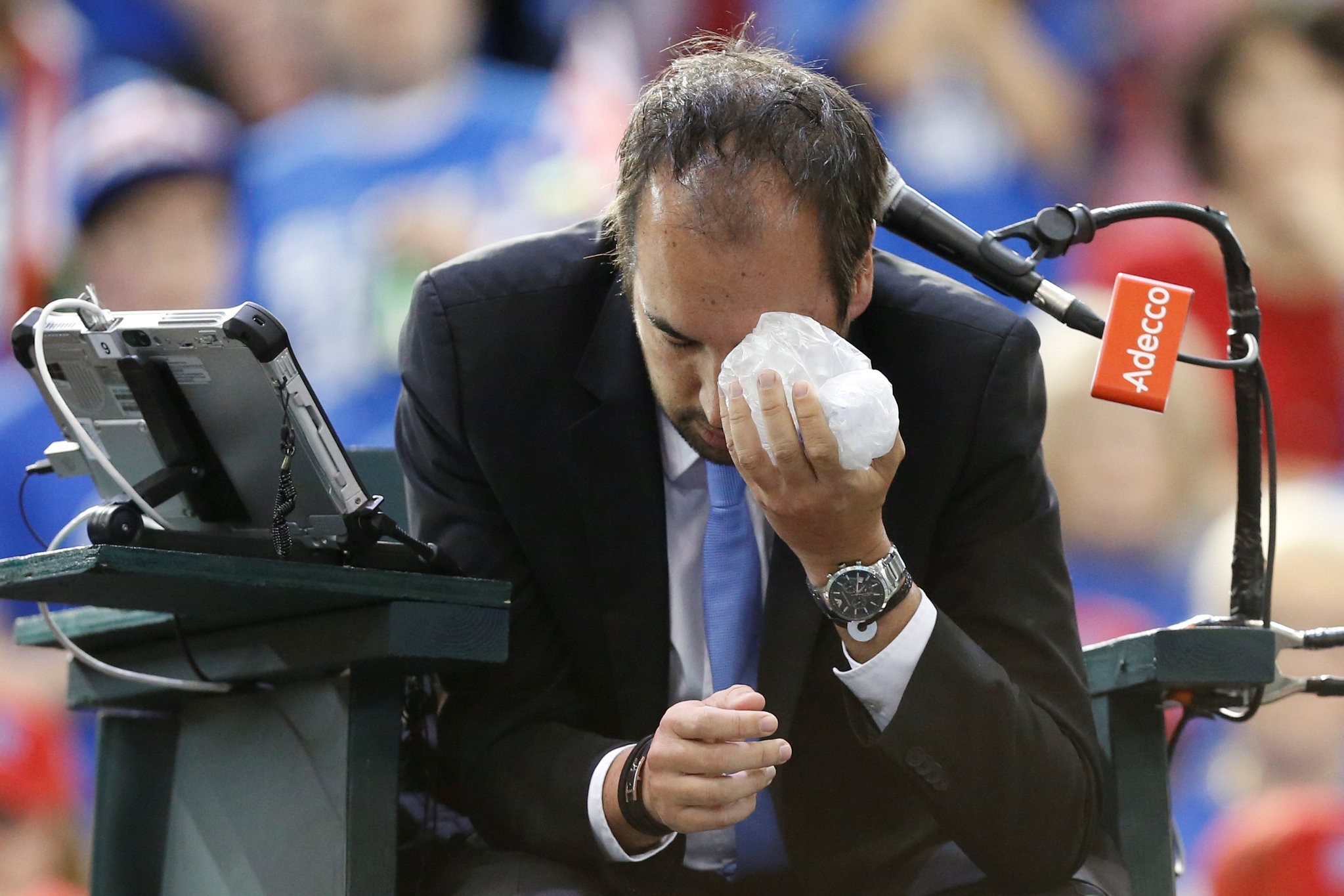 Umpire Arnaud Gabas holds an ice pack to his eye after being struck by a ball during a singles match between Shapovalov and Edmund. (REUTERS Photo)
by Feb 07, 2017 12:00 am

Canada's Denis Shapovalov was left mortified after joining tennis's hall of infamy on Sunday, offering an apology and promising that he would learn from his momentary explosion of temper that left a Davis Cup umpire needing a visit to hospital.

Shapovalov, one of the brightest young talents in the game at 17, was fined $7,000 on Monday for hitting chair umpire Arnaud Gabas with a ball he smashed away in anger during the Canada-Britain tie in Ottawa.

The youngster said he was "ashamed" by his behaviour during the match against Kyle Edmund, which resulted in his immediate disqualification and the tie being handed to Britain.

"After dropping serve in the third game of the third set, Denis Shapovalov hit the ball very hard, unintentionally striking chair umpire Arnaud Gabas in the left eye, causing him to need medical attention," the International Tennis Federation said in a statement on Monday.

The ITF confirmed later that the teenager had been fined a total of $7,000 for the incident - $2,000 for being defaulted and $5,000 for unsportsmanlike conduct.

He escaped the maximum penalty of $12,000 because his action had not been intentional.

The incident happened in the deciding rubber with the tie locked at 2-2 and Shapovalov, the Wimbledon boys champion, two sets and a break of serve down to Britain's Kyle Edmund.

The teenager was immediately defaulted for "unsportsmanlike conduct" and Britain were awarded a 3-2 victory.

"Referee Brian Earley, who witnessed the incident, declared an immediate default of MrShapovalov for unsportsmanlike conduct. It was clear that Mr Shapovalov did not intend to hit Mr Gabas," the ITF said.

Shapovalov sought out the umpire in the referee's office and apologised. Gabas, who suffered bruising and swelling to the left eye was sent to hospital for a precautionary evaluation.

Shapovalov issued an instant apology after the match, saying: "I feel incredibly ashamed and embarrassed and I just feel awful for letting my team down, for letting my country down, for acting in a way that I would never want to act.

"I can promise that's the last time I will do anything like that. I'm going to learn from this and try to move past it."

British captain Leon Smith said he could not help but feel sorry for the youngster. "I feel for the young lad. He's a great talent and he has learned a harsh lesson," said Smith.

People still remember how the British player Tim Henman was defaulted in a Wimbledon doubles match in 1995 when he struck a ball which accidentally struck a ball girl.

More recently, in the 2012 Queen's final in London, Argentine David Nalbandian kicked out at an advertising hoarding at courtside in frustration, which bloodied a line judge's shin. It cost him a 10,000 Euro ($10,700) fine.