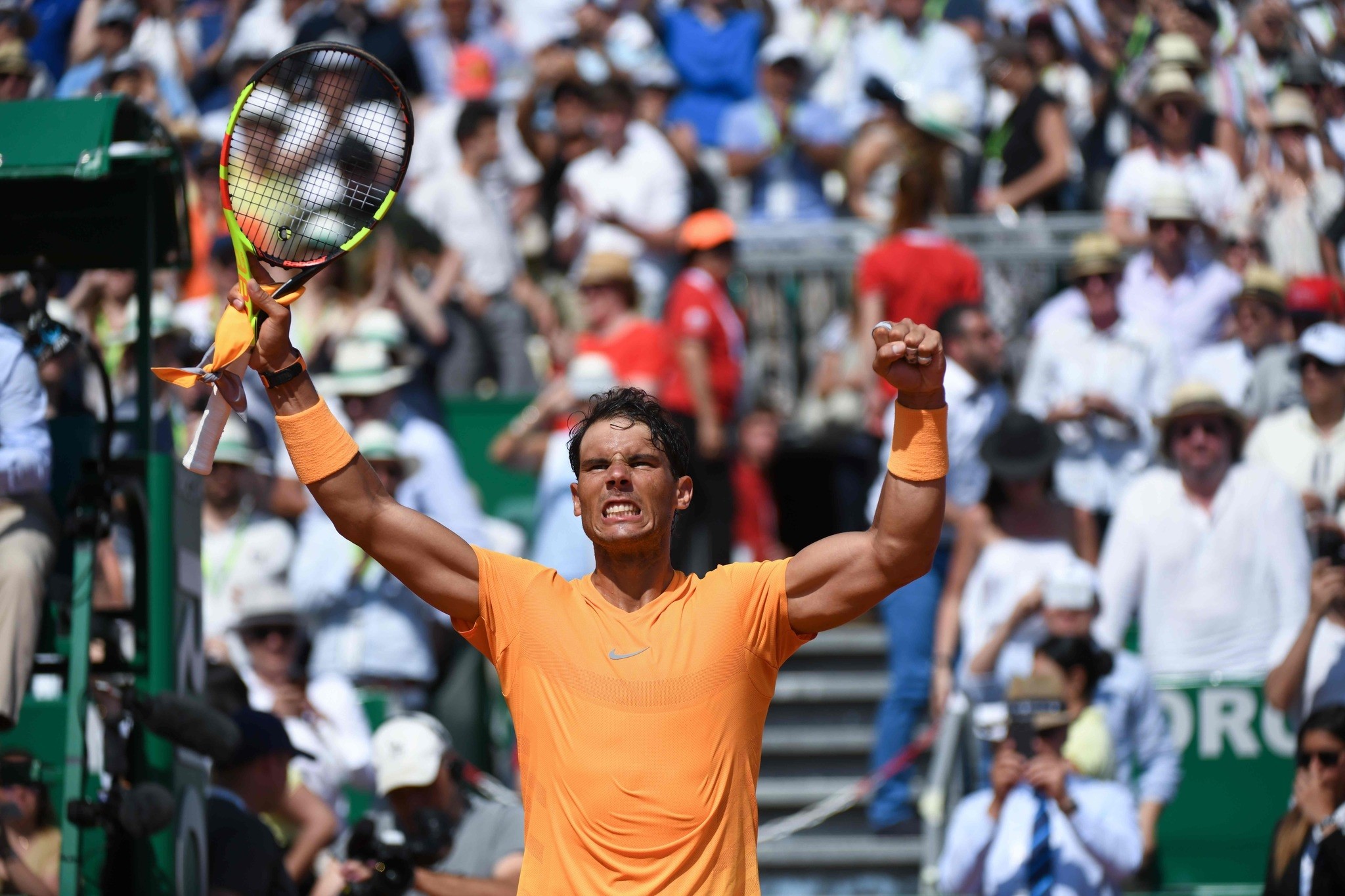 Spain's Rafael Nadal celebrates after his victory against Bulgaria's Grigor Dimitrov during their semi-final match at the Monte-Carlo ATP Masters Series tournament on April 21, 2018 in Monaco. (AFP Photo)
by Apr 21, 2018 12:00 am

World number one Rafael Nadal swept aside Grigor Dimitrov to ease into his 12th Monte Carlo Masters final with a 6-4, 6-1 victory on Saturday, while Kei Nishikori edged out Alexander Zverev.

The 31-year-old Nadal needs to win an 11th Monaco title to retain the number one ranking ahead of Roger Federer, and will be a red-hot favorite against Japan's Nishikori in Sunday's final.

"I really don't care if I am favorite or I am not favorite," insisted Nadal, after beating Dimitrov for the 11th time in 12 meetings.

"I go on court, I try my best. I want to win. Doesn't matter if I am the favorite or I am not the favorite."

Nadal came through a tight first set but always looked too strong for Dimitrov and raced through the second in half an hour.

"He's playing very good on clay. Simple as that. Tactically and everything else," admitted Dimitrov.

"It hurts a lot of us, a lot of the players that are maybe not as physically strong."

The top seed is bidding for an outright record 31st Masters title this week and extended his run of consecutive sets won on clay to 34 as he closed on a third consecutive Monte Carlo title.

"In our sport, there is not much time to stop and think about the things that have happened or not happened.

"When I retire, probably we will have the chance to think about it, how difficult all the things that I have done (were)."

Nadal, playing his first ATP tournament since he retired from his Australian Open quarter-final against Marin Cilic in January with a hip injury, has shown no signs of rust.

Following a 6-0, 6-2 last-eight demolition of Dominic Thiem, Nadal has lost only 16 games in four matches this week.

Nadal didn't take long to get into his stride, breaking at the first time of asking as Dimitrov struggled in the longer rallies.

The Bulgarian continued to go for his shots and brought up three break-back points in game five as Nadal followed a double fault with two wayward groundstrokes.

Nadal fired long, before Dimitrov saved a break point himself with a venomous forehand to level at 3-3.

The fourth seed was displaying the resolve needed to push Nadal on his favourite surface, and came back from break point down again as the Spaniard continued to miss chances.

But Dimitrov wasted all of his earlier good work, handing Nadal two set points with back-to-back double faults and a wild forehand.

The 16-time Grand Slam champion wrapped up the set with a whipped forehand onto the line.

"It was my fault when I got broken. Simple as that," said world number five Dimitrov.

"Two double faults, it's just definitely not acceptable, especially when you play against him on that surface."

That effectively ended Dimitrov's chances, and Nadal broke to love twice in a row in the second set before a wide Dimitrov backhand wrapped up yet another comfortable victory.

The Japanese player has struggled with a right wrist injury that forced him to miss the last four months of last season but has looked back to his best in Monte Carlo.

The former world number four, now ranked 36, did enough to wear down a tired Zverev who came through a late-night thriller with Richard Gasquet on his 21st birthday on Friday.

Nishikori is yet to win a Masters title in three previous final appearances, including one against Nadal in Madrid four years ago when he led by a set and a break before retiring injured.

He won his last match against Nadal in the 2016 Olympic bronze-medal match but has never beaten him on clay.