Nadal out of ATP Finals in London, says season finished due to injury 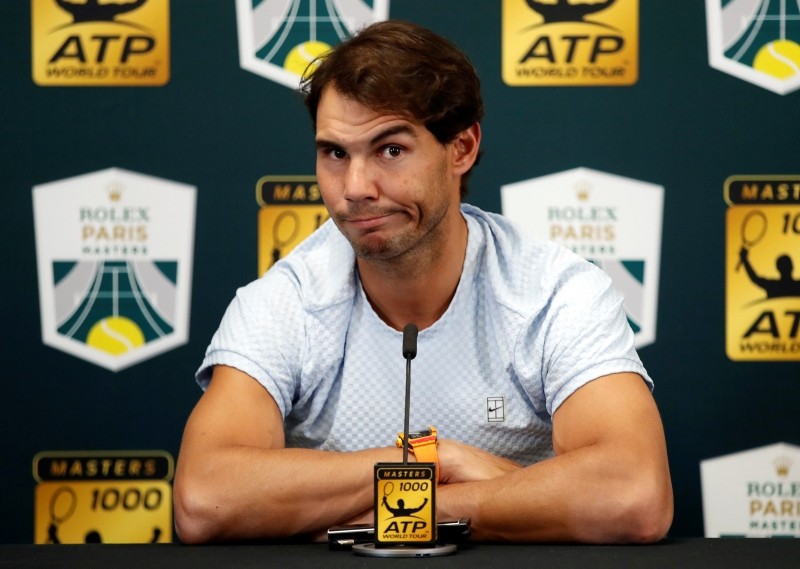 Rafael Nadal of Spain talks to media as he announces his withdraw from the Paris Masters tennis tournament at the Bercy Arena in Paris, France, Wednesday, Oct. 31, 2018. (AP Photo)
by Compiled from Wire Services Nov 05, 2018 12:00 am

Rafael Nadal confirmed on Monday he will miss the ATP Finals in London this month and that his season is over due to injury.

Nadal said he needed an operation on his right ankle and is also yet to recover from the abdominal problem that kept him out of the Paris Masters last week.

The Spaniard, who has just been dislodged as world No. 1 by Novak Djokovic, has an abdominal problem which prevents him from playing at the November 11-18 Finals, which brings together the season's top eight players.

He has instead taken the opportunity of undergoing arthroscopic surgery to remove a free particle in his right ankle joint.

The 17-time Grand Slam winner had been due to play his first match since the U.S. Open semi-final at the Paris Masters last week, but pulled out due to the abdominal injury.

Nadal said via Twitter and Facebook that as the injury would now prevent him playing in London he had decided on the ankle surgery.

"I have done everything possible to reach the end of the season in good condition, both in Paris and London, doing things well and I really wanted to play," Nadal posted in Spanish.

"Unfortunately I had the abdominal problem in Paris last week and, in addition, I have a free body in the ankle joint that has to be removed in the operating room today.

"It is true that we had detected it for a long time and from time to time it bothered me. However, since the problem in the abdominal muscle also prevents me from playing in London, we take advantage of the moment to remove the free body and avoid future problems.

"In this way I hope to be in full condition for the next season.