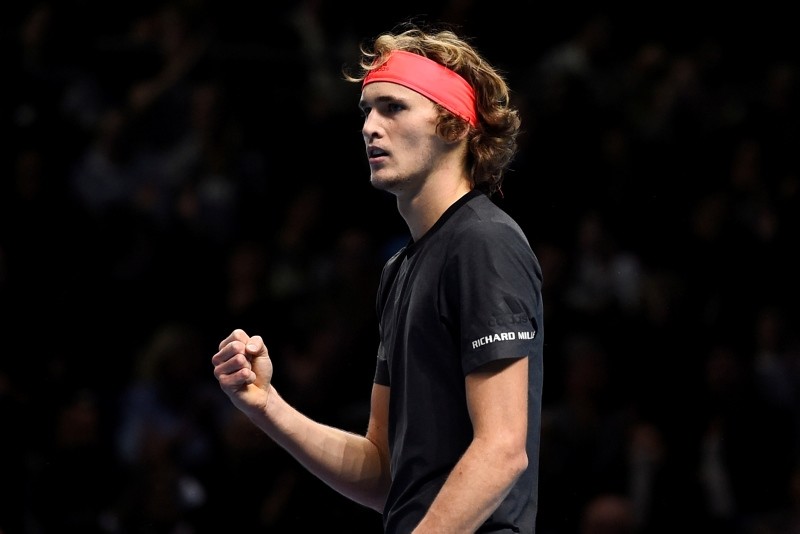 Germany's Alexander Zverev reacts during his final match against Serbia's Novak Djokovic at the ATP World Tour Finals tennis tournament at the O2 Arena in London, Britain, 18 November 2018 (EPA Photo)
by Nov 18, 2018 12:00 am

Alexander Zverev emphatically announced his arrival at the top of the men's game by beating Novak Djokovic 6-4, 6-3 to win his first ATP Finals title on Sunday.

The 21-year-old German, making his second appearance at the end-of-season showpiece, brushed aside six-time champion Roger Federer in the semi-finals and repeated the feat against the world No. 1.

The Serbian top seed came into the match seeking to equal Federer's record of six ATP Finals wins but was immediately aware he had a fight on his hands at London's O2 Arena.

With both players going toe-to-toe from the back of the court, the first set went with serve until the ninth game, when Djokovic dumped a forehand into the net to concede the break.

Roared on by the crowd, Zverev hit three aces on his way to sealing the first set.

Djokovic, renowned as one of the greatest returners the game has seen, had been even more impressive on serve in London, winning won all 36 games heading to the final and facing just two break points.

He beat Zverev 6-4, 6-1 in their round-robin match on Wednesday but it was a different story in front of a packed and vociferous crowd in London.

Still on a high after sealing the first set, the third seed broke an out-of-sorts Djokovic immediately at the start of the second set to leave the top seed with a mountain to climb.

Showing nerves for the first time, he double-faulted twice in his next service game as Djokovic got back on level terms but the German broke again to lead 2-1 as the Serb's error count climbed.

He broke Djokovic for the third time in the second set in the ninth game, producing a stunning backhand down the line at full stretch to win the championship.