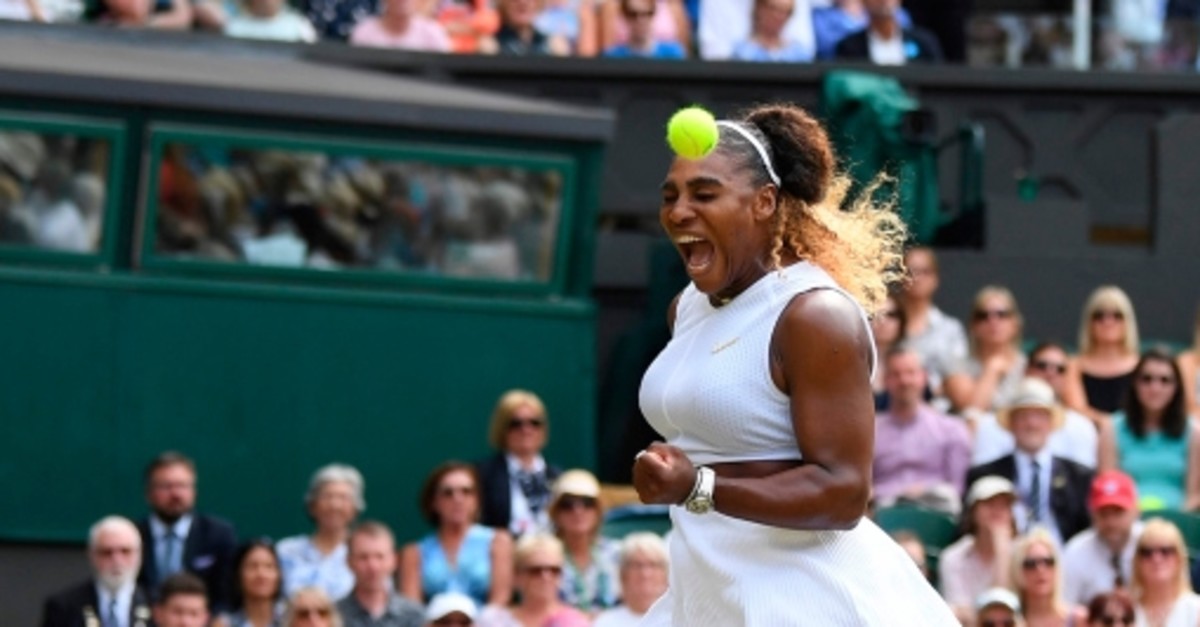 Williams celebrates winning a point against Czech Republic's Barbora Strycova during their women's singles semi-final match on day ten of the 2019 Wimbledon Championships at The All England Lawn Tennis Club in Wimbledon, July 11, 2019. (AFP Photo)
by Jul 11, 2019 7:36 pm

Serena Williams is through to her 11th Wimbledon final following a 6-1, 6-2 dominant victory over Czech Barbora Strycova in Thursday's semi-final.

The seven-time champion powered to the first set with two breaks in 27 minutes.

Williams broke twice more in the second set to seal her 98th Wimbledon win and enters the final as the oldest participant at 37 years and 291 days.

She will look to equal another record of 24 major wins - held by Australian Margaret Court - when the American faces Simona Halep in Saturday's final.

It will be the fourth consecutive final Williams has played in the tournaments she entered.

After being absent in 2017 due to pregnancy, Williams returned to reach the 2018 final but lost to German Angelique Kerber.

Halep is through to her first showpiece event at Wimbledon with a 6-1, 6-3 triumph over Ukraine's Elina Svitolina in the other semi-final.

The 2018 French Open champion broke serve first for 2-0 and despite being broken back in the following game, Halep raced through four straight games to take the first set.

Svitolina, who was appearing in her first major semi-final, conceded the match-winning break in the second set with a wide return at 4-3, and the Romanian Halep rallied towards victory in 72 minutes.

"It's an amazing feeling, I'm excited and nervous," Halep told the BBC after reaching her fifth grand slam final.

"This is the best feeling of my life and the score is not as easy as it suggests. I was very strong mentally and psychically. I fight to the end because I want to win every match I play."

Halep's progress to the final means she will rise three places in the world rankings from her current position of seventh, to number four.

The first set was initially not easy for Halep as she displayed signs of nervousness with two double faults and was forced to save three break points in the opening game.

But Svitolina was the first to fold as the 24-year-old was outplayed in the rallies to fall 2-0 behind.

The 2018 WTA Finals champion from Ukraine did take the fight to Halep with a break back, but then Svitolina's frustrations showed and Halep stepped into another gear.

Svitolina kicked the ball into the net after her volley return failed to lose her serve again and trail Halep 3-1.

The former world number one sprinted for a cross-court forehand to break again for 5-1 and in a lengthy exchange, Halep finally claimed the opening set after missing five opportunities.

In the second set, Svitolina's exit from the tournament was built when a hopeless return sailed wide for Halep to break and then hold serve for 5-3.

The Centre Court crowd were willing Svitolina to show the determination she had in the previous match with Karolina Muchova, when she battled from 5-2 and a break down in her quarter-final success.

This time her attitude was different. Svitolina's energy was negative as a wild forehand volley opened up match points for Halep.

After Halep saw Svitolina's backhand hit the net, she raised her racket in the air and held her head as the realisation took hold that she had returned to the main stage of a major.