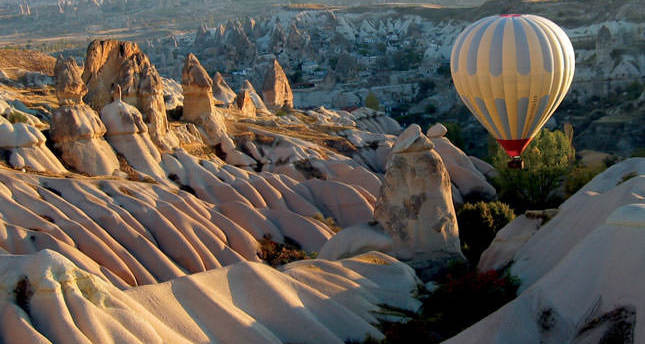 by AA
Nov 25, 2014 12:00 am
The "Gençlik Turizmi 2015" (Youth Tourism 2015) report, published by the Association of Turkish Travel Agencies (TÜRSAB), stated that Turkey aims to reach 50 million tourists, rake in $50 million in tourism revenue by 2023 and attract more young tourists between ages 7 and 27. In 2013, Turkey received 33.8 million foreign tourists including 8.5 million young people between 7 and 27. These youth also composed 25 percent of the 68.4 million domestic travelers in Turkey. The report further stated that 75 percent of total local and foreign young tourists spend on average more than $621 each, suggesting that they are a profitable segment of the tourism industry. According to data by the U.N. World Tourism Organization (UNWTO), 20 percent of over 1 billion tourists consist of young people. In other words, almost 200 million young people go on a journey to learn, explore, entertain and relax themselves. It is expected that this number will increase by 100 million and reach 300 million in six years, and their expenditure is projected to surpass $320 billion.

Many countries including Turkey are now launching special projects to draw more youth tourism. The 2015 report said that more than 22,000 young people attend free youth camps around different cities of Turkey. The price of private youth camps ranges between TL 750 ($337) and TL 15,000 ($6,738), and almost 30,000 young people participate to private youth camps. Half of all young tourists spend money in euros and they actively use social media, which contributes to the promotion of both domestic and foreign travels. The report showed that 56 percent of young people share their travels on online platforms. However, there are some tourism agencies that are not willing to become a member of TÜRSAB because they think youth camps, school journeys and summer schools abroad are not considered tourism. Such illegal tourism activities create problems during their travels, for instance, the law number of high-quality tourism facilities for youth force agencies to focus on holiday tourism for adults. The TÜRSAB report also emphasized that tourism activities for youth 18 and under should be conducted under the proper rules.