Commercial flights to begin on May 26 from Turkey's artificial island 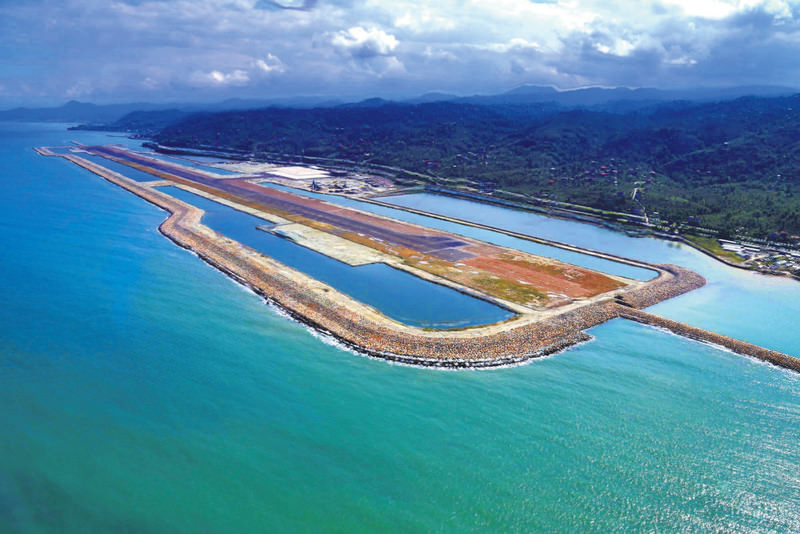 by Apr 26, 2015 12:00 am
Customs and Trade Minister Nurettin Canikli announced that the first commercial flights from Ordu-Giresun Airport would commence on May 26.

The airport has the capacity to serve 3 million passengers a year, and currently, Turkish Airlines has started selling tickets for flights. The airport between the northern Turkish provinces of Ordu and Giresun will be the eighth airport in the world built on an artificial island after its construction is completed and will be the first such airport in both Turkey as well as Europe.

Canikli visited the construction of Ordu-Giresun Airport of which the superstructure works for the highway from Giresun to Ordu's Gülyalı district. The minister listened to the briefing of the contractor firm and noted that the airport will improve tourism and support the economy of the region. He also announced that President Recep Tayyip Erdoğan would also attend the opening of the airport. Turkish Airlines is currently selling tickets starting from May 26 for flights from Istanbul and then international flights will commence, as there are many people from Giresun and Ordu who live abroad. The major construction work has been completed at the airport, although small additions are being made.

Minister Canikli noted that tourists with high income from Gulf and Arab countries are expected to prefer the airport. He also stated that there aren't many similar airports that are built by filling up the sea; therefore, they believe this will attract the whole world. "The airport is both modern and has the perfect location plus a 3,000 meter strip. Plus there is the 4.5-kilometer-long wave breaker that has been built by calculating data from all the waves and storms in the last 100 years," added Canikli.

The first stone-filled airport in Turkey and the third in the world is worth TL 350 million, including infrastructure and superstructure. While the runaway is 3,000 meters long, its width is 45 meters. Stone mastic asphalt was paved for the airport, and Minister Canikli traveled back to Giresun after his investigations at the airport via highway.
Last Update: Apr 27, 2015 1:19 pm
RELATED TOPICS