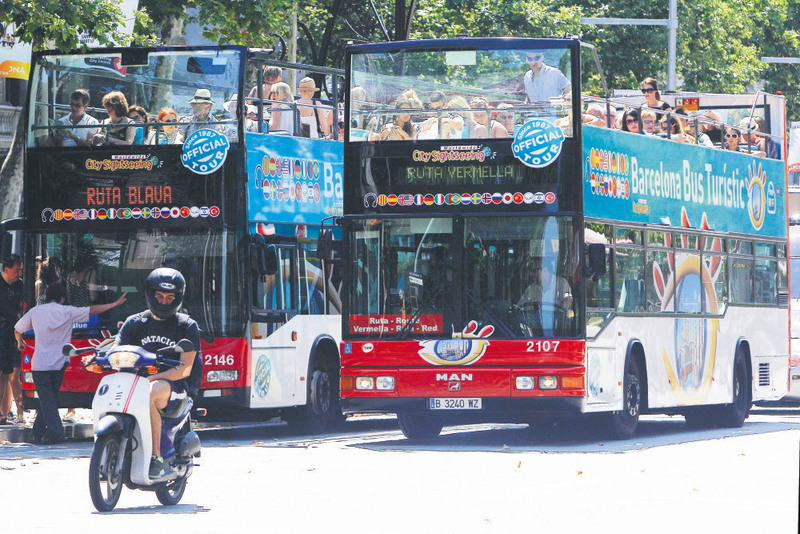 The arrival of the summer tourist season highlights the problems of mass tourism: long snaking lines to visit historic buildings, tour groups jamming the narrow streets of the city and crowded beaches

Tourists are vital to Barcelona's economy, but the 27 million people who visit each year have become a headache for the new mayor as she battles to save the iconic Spanish Mediterranean port from becoming a bland theme park.

"Tourists go home" is frequently found painted on the walls of buildings in the center of Spain's second-largest city, which is struggling to cope with a surge in tourism that started when it hosted the Olympics in 1992. The city of 1.6 million residents is now the third most visited in Europe after London and Paris, according to a 2013 study by Mastercard, and tourism contributes to 14 percent of Barcelona's economy.

The arrival of the summer tourist season highlights the problems of mass tourism: long snaking queues to visit buildings by modernist architect Antoni Gaudi, tour groups jamming the narrow streets of the Gothic quarter and crowded beaches with little room to lay down a towel. "Barcelona is at a crossroad. If nothing is done, in 30 or 40 years it could become a Venice, a city completely specialized in tourism," Francesc Munoz, a geography professor at Barcelona's Autonomous University, told AFP.

The dependence on tourism is already evident in some areas of the city, such as the tree-lined Ramblas avenue.

Once a meeting place for locals, the street is now heaving with tourists who throng fast food restaurants and souvenir shops.

"We are losing our essence. Where once there used to be flowers, now there are only souvenirs," said Carolina Palles of the oldest flower shop on the Ramblas, which was founded by her great-grandmother in 1888.

In front of her shop a huge banner hangs from a balcony that reads: "Barcelonians, return to the Ramblas."

Vendors at the nearby historic La Boqueria market complain that gawking tourists prevent locals from buying their groceries.

"Traditional clients have stopped coming because they don't have room to walk or move their shopping cart," said Xavier Alonso, a fishmonger at the market who says his sales has halved in the last five years.

Last year there were even grassroots protests against tourism in the seaside neighborhood of Barceloneta following an explosion of short-term rentals that flooded the area with young, rowdy visitors.

"The tourism boom has been a very quick process - in 25 years - and the city did not absorb it well. This has generated this tourismophobia," said University of Barcelona geography professor Francesc Lopez Palomeque, who worked on the city's 2008-13 tourism plan.

Now Ada Colau, an anti-eviction activist who was sworn in as mayor last month after winning a May municipal election, is working on a plan to make local residents' daily life compatible with this important economic sector, which generates 120,000 jobs.

Her first measure, announced on Thursday, was to stop issuing new licenses for tourist accommodation for one year while a new strategy is being developed for the sector.

But that has affected some 30 projects, including a plan to turn the city's iconic geyser-shaped Agbar skyscraper tower into a five-star Hyatt hotel, sparking warnings from key investors. Investment fund Emin Capital, which bought the Agbar building in 2013 for 150 million euros, had planned to open the hotel in 2017 and estimated the project would generate around 1,000 jobs.

But with Thursday's suspension of new licenses, Emin Capital president Jordi Badia warned: "Barcelona is a global model when it comes to tourism. Every investor wants to come here, but if we create legal insecurity, they will go elsewhere."

Barcelona currently has 600 hotels with 74,000 rooms as well as 9,600 registered tourist apartments.

But officials suspect the number of unregistered tourist apartments rented through online platforms like Airbnb is much higher. A study by Spanish tourism sector body Exceltur estimates there are 137,000 rooms for rent in private homes through online platforms. "There is a campaign to give us a bad name because we take market share away from them," said Enrique Alcantara, president of Barcelona's tourism apartment association APARTUR.

"These types of apartments help to disperse visitors to the city and redistribute the benefits of tourism," he added.

The negotiations to reach a pact to make tourism sustainable and unclog the more saturated areas of the city are expected to drag on, but there is a consensus that it needs to be reached.

"Barcelona is a global tourism icon. But if the problems continue it could sully this image and end up affecting the city's tourism," said Lopez Palomeque.
RELATED TOPICS