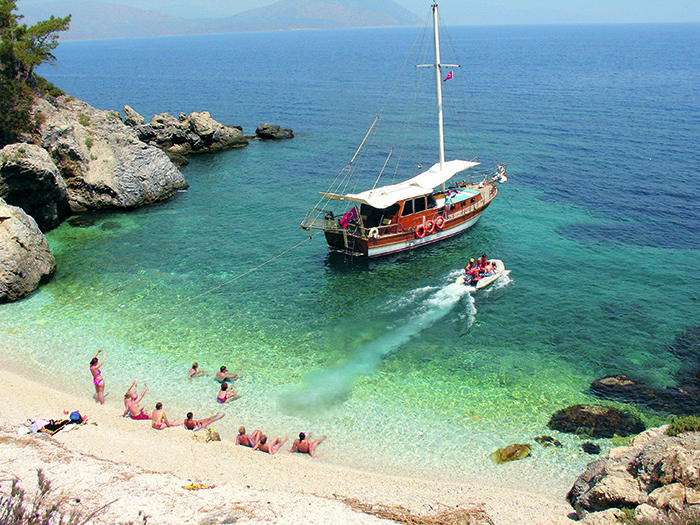 by Anadolu Agency
Dec 09, 2015 12:00 am
The Russian government claims that restrictions on tourists visiting Turkey will hurt industry revenue at the most popular destination for Russian tourists.

The Russian government banned trips to Turkey after a Russian fighter violated Turkish airspace on Nov. 24, and was shot down after repeated warnings.

Experts from within and without Russia, however, said that the Russian tourist industry would suffer most under the ban.

Trips to Turkey from Russia almost doubled between 2009 and 2014, from 2.7 million to 4.5 million respectively, according to Marija Milasevic, senior analyst at Euromonitor International.

While Russian tourists made up almost 14.65 percent of Turkey's visitors last September, this figure dropped to 12.44 percent of total visitors in the same month of 2015.

"So a lot of Russian tour operators and travel agencies will suffer significantly," Milasevic commented.

"And some Russian tourists are creative and do not want to refuse traveling to their favorite budget destinations," she added, suggesting that these tourists will travel to Turkey via other countries like Belarus.

The ban is a typical Russian government reaction, explained Andrey Movchan, director of the Economic Policy Program at the Carnegie Endowment for International Peace Center in Moscow, in an interview with Moscow's independent newspaper, Novaya Gazeta on Dec. 2.

"First, in the face any difficult situation, the government tends to ban something. Then, it may use this crisis to save some foreign exchange for Russia," Movchan said.

"In Russia, there is a problem with foreign exchange earnings. The trade surplus for 2015 will be around $ 150 billion. However, according to the forecast of the Ministry of Finance, after deducting the balance of services, the flight of capital and other payments, the balance of payments will be negative, around minus $18 billion. Therefore the losses in tourist spending are a huge amount of money for Russia," Movchan said.

The logic behind the ban is simple, according to Movchan: "If you ban cheap holiday packages, then a considerable number of Russians will remain in the country, will not sell rubles to buy dollars for travel, and foreign exchange will be saved."

But Movchan thinks that Russian tourists will travel abroad anyway.

"It is impossible to predict in advance that we will be able to save hard currency through travel sanctions against Turkey. Much depends on how the tourists behave in future. Russians prefer to take their vacations in Turkey. Russia does not have alternatives offering the desired quantity and quality," Movchan said.

Movchan warned that tourists are unlikely to stay in Russia. "About 7-8 million Russians have developed a lifestyle based on vacationing in foreign resorts." They may go to Turkey anyway (via other countries), or they may go to other foreign destinations, so there will be no hard currency savings.

"What's more, with good pricing, the Turkish tourism industry may still have a chance to make up for fewer Russian tourists next summer, with the help of European holidaymakers. Europeans who do not want to holiday in Egypt or Tunisia because of the threat of terror may go to Turkey anyway -- they may not prefer Spain because of the higher prices there."

Anna Gusarova, analyst with Kazakhstan Institute for Strategic Studies, told Astana TV on Nov. 29 that Russia is likely to pay an economic cost for the tourism sanctions, especially at a time when Russia and Europe have imposed sanctions on each other.

"Turkey is likely to find tourists from other countries to replace the ones lost from Russia," Movchan continued. The same would be true of Turkey's metal imports from Russia, and even for the large gas supplies purchased from the country, Movchan said.
Last Update: Dec 09, 2015 5:25 pm