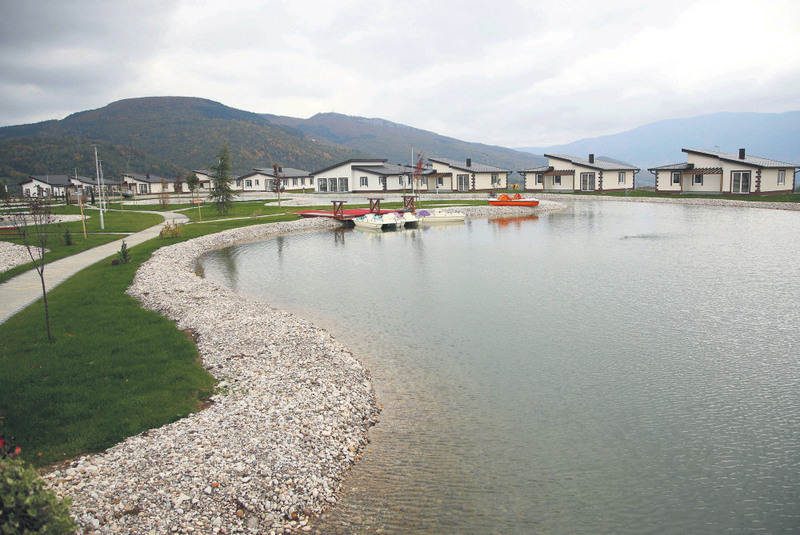 The first Arab-funded resort recently opened in Osenik, 50 kilometers south of Sarajevo, with 160 individual houses and apartments built around an artificial lake.
by Associated Press Dec 16, 2015 12:00 am

The Balkan country is becoming a popular destination for tourists from the United Arab Emirates, Kuwait and Qatar thanks to its comfortable summer temperatures and local Muslim community

As tourists from the Gulf countries look to book their next holiday to escape the summer heat, Arab investors are betting on an unusual destination: Bosnia. The mountainous Balkan country, which was devastated by the 1992-95 war, is becoming a popular destination for tourists from the United Arab Emirates, Kuwait and Qatar thanks to its comfortable summer temperatures and local Muslim community.

Attracted by cheap land and labor, Arab investors are looking to ride the trend. They are building thousands of homes and hotels around the capital Sarajevo and heavily promoting the destination to middle class families looking for cheaper alternatives to the glamorous Swiss resorts.

It's also a boost for Bosnia's economy, which is still recovering from the war and struggling with unemployment of over 40 percent. All the construction is done by local companies, ensuring jobs. "Bosnia's tourism has a bright future," said Jasem Ahmed Al Kanderi, the head of the Gulf Estate Company from Kuwait. "The country is beautiful."

His company built and recently opened the first Arab-funded resort in Bosnia. Located southwest of Sarajevo, it includes 160 individual houses and apartments built around an artificial lake. The gated community offers swimming pools, supermarkets, sport facilities and views of the mountains where the Winter Olympic Games were held in 1984.

"It is a tourist village but also an investment opportunity," said Al Kanderi. "We managed to promote Bosnia's tourist potentials in Gulf countries and we are proud to be the first ones to complete a project."

But the 25 million-euro ($27 million) project appears tiny compared with the one planned by Ismail Ahmed, the head of Buroj Property Development from Dubai. Wearing his traditional Arab jalabiya and sandals, Ahmed stood in the icy rain above the plateau where his company plans to build a 2.3 billion-euro ($2.4 billion) town called Buroj Ozone on the Bjelasnica mountain, less than 15 kilometers (9 miles) southwest of Sarajevo.

"Jannah," or paradise in Arabic, he said as he waved his hand over the picturesque plateau where in April construction work will begin on 2,000 villas, 60 hotels, 186 residential buildings, a hospital, shopping malls, restaurants and even a dancing fountain.

For tourists from the United Arab Emirates, Buroj Ozone's altitude at nearly 1,000 meters (3,280 feet) and an average summer temperature of 25 degrees Celsius (77 Fahrenheit) can offer refuge from summer temperatures of up to 49 degrees (120 F) in Dubai.

Ahmed acknowledges that for many, Bosnia is still associated with its terrible war 20 years ago and overcoming that image is a challenge. "We spent millions on marketing," he said.

Bosnia has seen a significant rise in tourism in recent years, with visitors from East and West flocking to Sarajevo to see "little Jerusalem" a city loaded with history that features Catholic and Christian Orthodox churches, Jewish temples and mosques next to each other.

Overall tourism numbers are up 30 percent this year from last year, with Austrians and Germans the most represented nationalities. But visits from Gulf countries are growing the fastest. The number of Kuwaitis has more than tripled this year to 33,000.

Bosnian president Bakir Izetbegovic says the country is slowly becoming better organized and recovering from its past. The government is building a new highway that will make travel and transport easier and allow tourists to reach the coast from Sarajevo within an hour.

"We will continue to work on the stabilization of this country, on passing laws that will speed up investments and make them safe," Izetbegovic said as he watched the opening of the Kuwaiti resort.