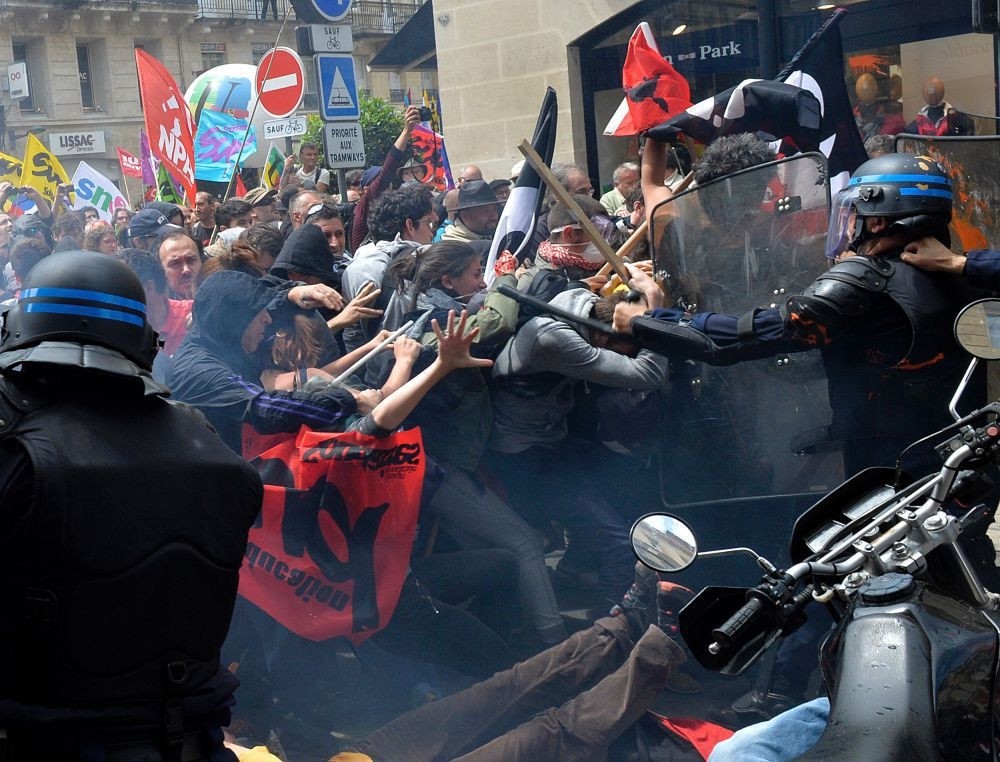 Security forces clash with demonstrators during a protest called by seven labor unions and students against the labor and employment law reform on May 26 in Bordeaux, France.
by Daily Sabah with Wires
May 31, 2016 12:00 am

Already suffering from the impact of last year's extremist attacks, tourism in Paris is facing a fresh challenge from a wave of violent strikes and protests

Tourism bosses have warned that with threats of nation-wide violent protests and strikes which are disrupting transportation, the number of tourists visiting Paris is decreasing ahead of the Euro 2016 championship. Hotel bookings by Japanese visitors were down 56 percent in the first quarter of the year compared to the same period in 2015, while Russians were down by 35 percent, according to the city's tourist board.

Chinese tourists had been a major driver of growth last year – reaching a new record of 1.2 million – but their numbers this year dropped by 13.9 percent. "The start of 2016 is still feeling the disastrous consequences of the attacks in 2015," read a statement the tourism board.

France is the world's most visited country, but tourists were frightened by the November attacks in the capital that left 130 people dead, and last year's January 2015 killings at the Charlie Hebdo magazine and a Jewish supermarket. While the atmosphere in Paris had returned to normal in recent months, an outburst of social unrest over controversial labor reforms has once again put doubts in the minds of tourists.

Three months of student and union-led protests have descended into violent clashes between demonstrators and police. Unions are tapping months of public anger over a labor bill that would make it easier for employers to fire workers and lengthen the working week.

The scenes of violence seem to have had a negative impact on tourists perception of the country. The fresh industrial unrest, which caused petrol shortages and travel delays across France last week, was set to hit transportation just days before fans begin arriving for the start of the football championships on June 10.

"There is still time to save the tourist season by putting an end to these blockades that are being shown the world over," said Frederic Valletoux, head of the Paris tourist board. "It's the entire tourism and leisure network that is penalized. The challenge for employees is immense because 500,000 of them depend on the sector in the Paris region."

France braced yesterday for severe disruption to trains and flights less than two weeks before Euro 2016, as unions called fresh strikes in their battle to have labor reforms scrapped.

After weeks of trading insults, the head of the national union General Federation of Labor (CGT) Philippe Martinez revealed he had received a call from Prime Minister Manuel Valls to discuss the bitter standoff. Martinez refused to reveal the content of Saturday's call, but told BFMTV: "The fact that he deigns to call the spokesman of France's biggest union, rather than denigrate him, is a good sign."

Workers at France's national rail authority – whose service will be crucial to Euro 2016 spectators – are going on strike starting tonight. The Paris transit authority starts their strike on Thursday. Air traffic controllers are threatening to join in starting Friday.

Aviation unions have called for stoppages next weekend, and Air France pilots voted Monday to go on strike for at least six days in June in a separate dispute over productivity targets, which could spark added chaos for visitors to Euro 2016.

Fuel shortages are another concern. Striking workers have blocked or slowed production at most of France's eight refineries, and disrupted oil imports at ports around Marseille on the Mediterranean and Le Havre on the English Channel.

Blockades at fuel depots last week caused nationwide gasoline shortages, but the situation has eased somewhat since the government ordered police to clear out protesting workers. Picketers had been blocking an oil depot in Port-de-Bouc near Marseille, but police ended that protest Monday.

The government argues France needs to reform to survive in the global economy, but critics say it strips away hard-fought worker protections and won't create the jobs promised.

Despite the protests over the bitterly disputed law, the government has remained defiant, with riot police on Friday moving in to clear blockades outside petrol depots, and French President François Hollande vowing not to give in to union demands.