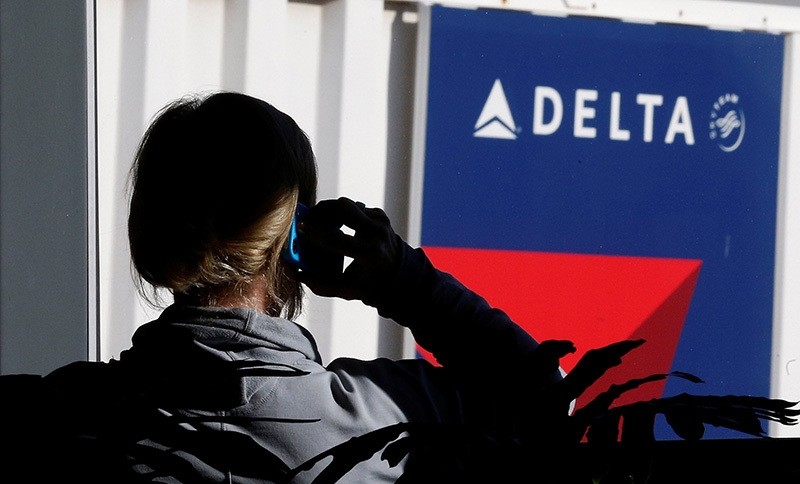 A passenger talks on her phone at a Delta Airlines gate a day before the annual Thanksgiving Day holiday at the Salt Lake City international airport, in Salt Lake City, Utah November 21, 2012. (Reuters Photo)
by Associated Press Aug 08, 2016 12:00 am

The Atlanta-based carrier said the outage began at around 2:30 a.m. Eastern. Flights which were already en route were operating normally, but others were delayed or cancelled.

"We apologize to customers who are affected by this issue, and our teams are working to resolve the problem as quickly as possible," the company said in a statement .

It noted that flight status systems, including airport screens, were incorrectly showing flights on time, something the company was trying address.

In the meantime, TV footage in the U.S. showed some boarding passes were being written out by hand.

Early confirmation of the troubles first came in an official account that responds to customers via Twitter. The company had said its IT systems were down "everywhere" and "hopefully it won't be much longer." Several applications were affected, including the company's website.

Among those affected was Tanzie Bodeen, 22, an intern at a software company who lives in Beaverton, Oregon. She had left for Minneapolis St. Paul airport at about 4 a.m. and learned about the delays only upon her arrival — when she found news crews gathered at the door.

Bodeen said that passengers have been taking the matter in stride. "It doesn't seem really hostile yet," she said.

People all over the world were affected. Stephen Smith, 32, of Baton Rouge, Louisiana, had been stuck on the ground for hours at Tokyo's Narita Airport on a flight that was supposed to go to Shanghai.

Smith took solace in the fact the air conditioning on the plane was working and said it seemed everyone on board was fine.

"Waiting game at this point," he tweeted to The Associated Press.

The company said travelers will be entitled to a refund if the flight is cancelled or significantly delayed. Travelers on some routes can also make a one-time change to the ticket free of charge.

Delta shares were down 2 percent in pre-market trading.

Computer outages have caused major headaches for airlines and travelers before. Southwest Airlines was forced to cancel more than 2,000 flights across the U.S. last month after technology problems prevented many travelers from checking in or boarding flights.