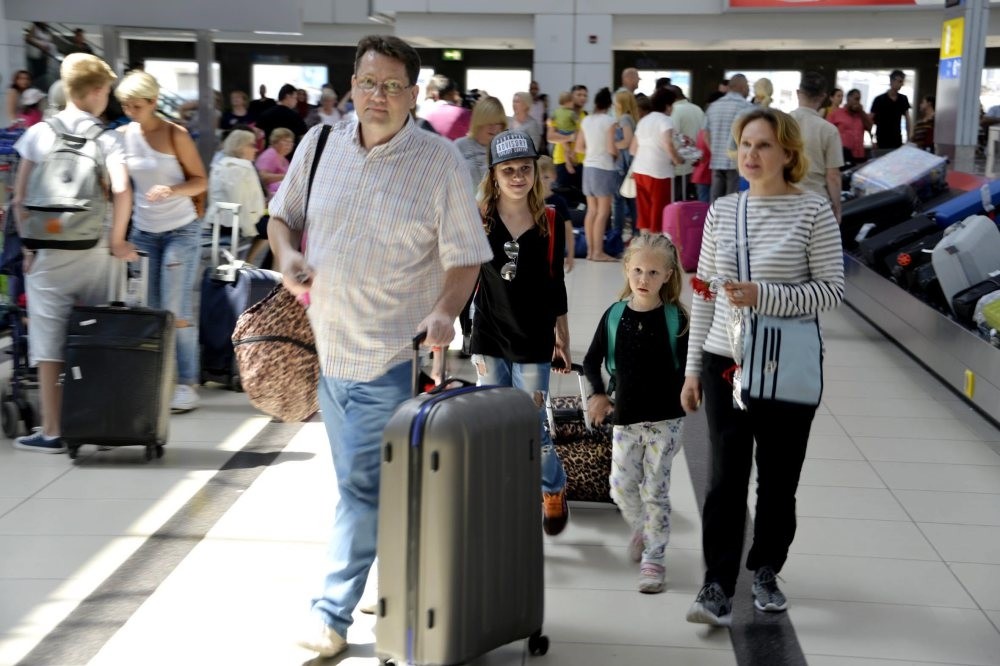 ‘Bring your neighbors' is the motto of new campaign initiated by President Erdoğan, calling on Turkish citizens abroad to bring their neighbors to Turkey during their visit to the homeland. The tourism sector is seeking ways to rebound in 2017

President Recep Tayyip Erdoğan Thursday said, in order for Turkey to become one of the top 10 economies in the world, it must strive to establish itself as one the top three tourist destinations. In doing so, President Erdoğan urged Turks residing abroad to bring their neighbors along on their vacations. He was speaking at a program organized for the representatives of the tourism sector, with the country's struggling tourism sector on the agenda. According to recent data released by the Turkish Statistical Institute (TurkStat), the country's tourism income fell by at least 30 percent year-on-year to $22.1 billion in 2016, from $31.5 billion in 2015, as it experienced a decrease of $9.4 billion in one year.

This sharp decline in tourism is just one way of showing the cost of terror in Turkey, which has experienced a bad year with multiple terrorist attacks carried out mainly by the PKK and Daesh. Now, the country's government and the terror-hit tourism sector are seeking to rebound in 2017.

Noting the fact that there are around 5 million Turkish citizens living abroad, with 3.5 million of them regularly traveling back to Turkey, Erdoğan said no Turkish citizen would sever ties with their country no matter where they go in the world.

"We also consider our citizens, residing abroad, as honorary tourism ambassadors of our country. We invite those who live abroad, to spend their holiday back home with their families. Citizens should spare at least a week of their vacations to tour Turkey, with the understanding that this is our home and we should get to know it," he said.

Inviting citizens living abroad to bring along their neighbors and friends, Erdoğan said that they were planning to launch a campaign called "Bring Your Neighbors." "I believe to come out of this troubled cycle we need to make new breakthroughs, by turning the crisis into an opportunity," Erdoğan said. "We are heading towards this approach in export, tourism and all the other fields. We are trying to revive our existing tourism destinations," he added.

Recalling the fact that back in 2002, tourism in Turkey had only three things to offer, namely sand, sea and sun, with no other area of action, Erdoğan said that along with diversification in tourism, the number of tourists has slowly started to increase. "I believe that we will reach our tourism goal of $50 billion and later $86 billion in a short period of time," he said, underlining that the tourism culture in Turkey was becoming more widespread, all of which were important parts of the future of the sector.

Goal is to be named among top 3 tourist destinationsPresident Erdoğan pointed out that the tourism sector produced services entirely with Turkey's own facilities, products, and assets, which actually increase its contribution, power, and value of tourism activities.

"We are aiming to become one of the top 3 tourist destinations, while we aim to enter the list of top 10 economies. The recently experienced economic crises did not originate here. I believe the way to get rid of this troubled process was not by shutting down or shrinking, but by entering a new era of breakthroughs," Erdoğan said, suggesting that Turkey was heading towards newer and stronger policies in export, tourism, and economy, and that the Tourism Emergency Action Plan has also followed these approaches.

Under the Tourism Emergency Action Plan Support Package, put into effect by the government in 2016, A-group travel agencies that brought tourists to Turkey, have been given fuel support per flight and the opportunity to use loans through the credit guarantee fund.

Aim to increase number of tourists by 8 million

According to President Erdoğan, service quality in Turkey has changed and it could be seen that tourism culture in Turkey was becoming more widespread, while Turkish citizens were on the move in terms of touristic activities.

Noting that the way to evaluate and fulfill these opportunities was by developing new strategies, finding newer methods, instruments and organizing campaigns, Erdoğan said, the initial goal should be increasing the number of tourists by around 8 million. In this regard, the Tourism Ministry, under the auspices of the Presidency and in cooperation with the sector, was said to be launching a campaign.

The tourism sector has been one of the growth engines for Turkey over the last 14 years, when the numbers of tourists visiting the country reached 40 million from just 12-13 million, while tourism revenues reached $31.5 billion in 2015. The sector owed this rising trend to new infrastructure investments in the country, according to the president.

'You can live the past and the future at the same time'In his speech, President Erdoğan said that Turkey was one of the world's greatest outdoor museums. From Ephesus to Cappadocia, from Sumela to Ani, from Nemrut to Mevlana, from Selimiye to Ishak Pasha, all these highlighted Turkey as a country of exceptional riches that is sure to appeal to everyone, regardless of their nationality, belief or language.

"You can find the west and the east, the north and the south, the authentic and the modern, the past and the future, the mosaic and ceramics, the sea and mountains, the Ney and Kamancheh, thermal springs and skiing, and much more, only in Turkey" Erdoğan said, inviting all the tourists to experience these beauties of Turkey.
RELATED TOPICS