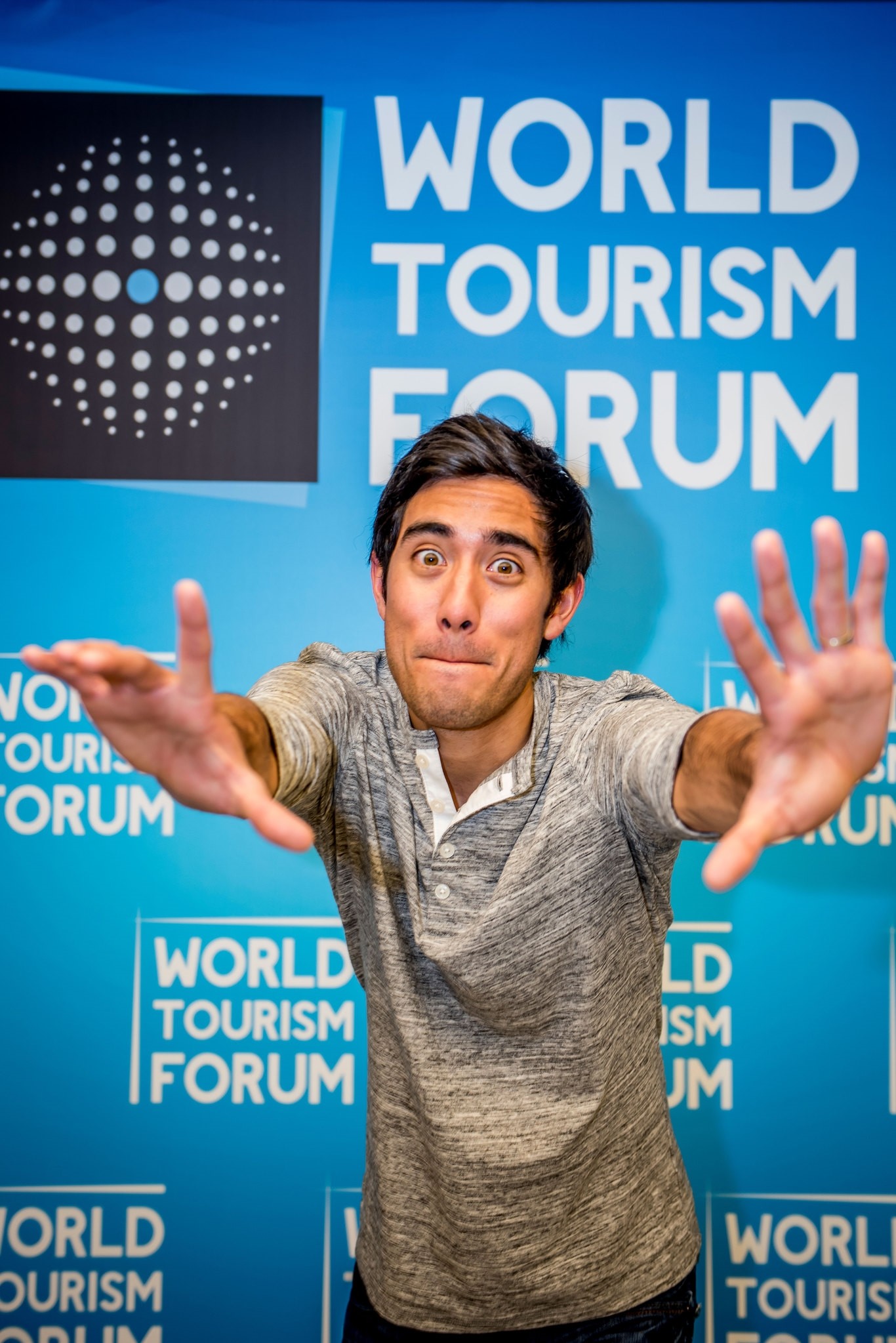 Influential people in the tourism sector were also invited to the forum, including internet phenomenon Zach King, who is featured in Turkish Airlines (THY) security demos. King, an illusionist who has more than 17 million followers around the world was in Istanbul on Friday as part of the "World Tourism Forum Global Meeting" event where he shared his success story of being an internet phenomenon.

Giving an interview to Daily Sabah, King, said that Turkey is a country that offers very good frames in terms of shooting. Zach said that he is thinking of shooting more videos in Turkey and that he has come to Istanbul for some European shoots because it saves a lot of money on taxes, and there are good production rights in Istanbul, which is a great benefit. Zach also indicated that he would bring some of his productions to Turkey for commercials. Talking about their recent cooperation with THY, Zach said it is still an ongoing partnership and they hope they will create more and more content with THY as they move forward.

"It is a shame that terrorism can ruin tourism for a city like Istanbul, a beautiful country such as Turkey. It does not deserve it. We hope Turkey will get through this troublesome process as soon as possible," said Zach about the previous and current tourism situation of Turkey.

When asked about the global refugee issue and whether they have any projects in mind, Zach said: "I think that heavy issues such as this one are valid and important to tell. We want to draw attention to something like this. We have many followers on all accounts. Of course, it is something that we would like to do something about. It would be very nice, and I think there is a way to do that." Since they haven't discussed what content related to the refugee issue would look like, he said, "However, we know that it is a really important issue. Maybe we are not directly talking about politics or the issue of refugees and families, but hopefully we can bring smiles to youths through the contents of our videos."

King to shoot a short film in Cappadocia

Speaking about his experience in Istanbul and other cities in Turkey, Zach said: "Someday I want to come back on a personal vacation to Turkey and visit cities other than Istanbul since I have only been in Istanbul during my previous visits. Many people told us about Cappadocia, which is a very beautiful and colorful place and that we should go and film there. Someday, maybe in a couple of years, we will come back and film there." When asked whether he could estimate how much he contributes to the tourism of the countries he makes videos in, he said, "It is really hard. I don't think I could ever measure how many people go somewhere because of our videos, but we do hopefully bring awareness of different places." He added that his team consists of 16 people.

With regard to collaborating with Turkish companies, Zach said they have worked with a couple of different agencies and they would like to collaborate with more brands in Turkey. "We filmed an advertisement with P&G Turkey, and there are companies we are in contact with," he said.

King, who has been widely heralded as the king of Vine magic, is also known as FinalCutKing, which has amassed over 1.3 million subscribers on YouTube. Furthermore, being extremely famous for his "magic vines" - six-second-long looping video clips edited to look as if he is doing magic, he earned around 3.9 million followers. He calls his videos "digital sleight of hand." He also has more than 17 million followers on Instagram. In 2014, Zach won a Streamy Award for Best Vine Creativity. Zach's visual trickery has made him a star unlike any other. His comedy chops combined with dazzling editing have gotten him deals with HP and Best Buy, an American multinational consumer electronics corporation, and entry into the Tribeca and London Film festivals.