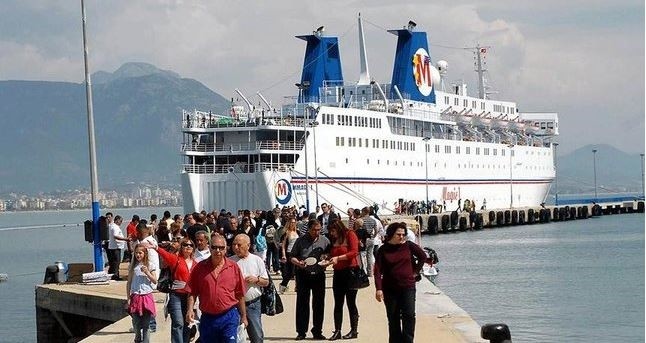 Israeli tourists arrive in Turkey as their ship docks at a southern Mediterranean port. (File Photo)
by Anadolu Agency Mar 16, 2017 12:00 am

Turkey has seen a boost in the number of Israeli tourists following the normalization of ties last summer, according to the owner of a tour company in the southwestern province of Muğla, which is home to popular holiday resorts such as Bodrum and Marmaris.

"We were planning to bring 2,500 Israeli tourists in March and April, but the number has already exceeded 4,000," Kaan Yardacılar said on Wednesday.

"In 2016, we brought 6,500 tourists to Marmaris. This number will likely double or even triple this year," he said.

He also noted a change in the profile of Israeli tourists traveling to Turkey.

"Tourists who came from Israel in the last two years were Muslim Arab citizens. But this year's first and second groups who came to Marmaris were all Jewish.''

Turkey and Israel renewed ties in June 2016 following a six-year split over the attack on the Mavi Marmara humanitarian aid ship. Israeli commandos had killed 10 Turkish activists aboard the Gaza-bound vessel.

In Dec. 2016, both countries re-appointed ambassadors as part of the reconciliation deal and reiterated several times the necessity of further improvements in bilateral relations.