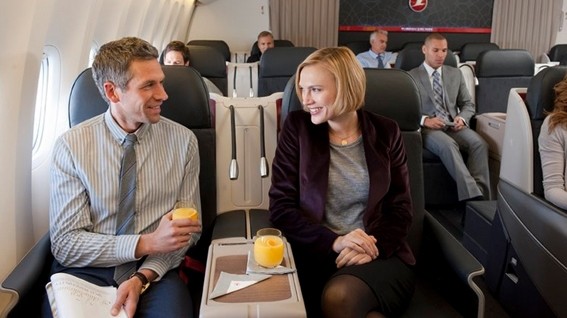 After a rocky second quarter in 2016, Turkish Airlines (THY) compensated by making $386 million in the last quarter of the year, and registered a 6.7 percent rise in the number of international flyers and handled 33 percent more cargo traffic this May, THY Chairman İlker Aycı has confirmed.

Aycı said THY actively managed its fleet, network, frequency depth and expenses by developing new strategies and new perspectives against the odds. It responded to these effects with innovative approaches by optimizing all parameters.

Revealing that Turkey's national flag carrier grew by 10 percent in the first three months of the previous year, Aycı said, "Despite everything, we maintained our reputation as the airlines flying to the highest number of stops with 302 destinations and 120 countries around the world.

He said that THY's cargo segment has continued to grow, but saw an 8 percent decline in passenger income last year, which is in line with a general decline in the sector. Detailing the increase in cargo income, Aycı noted that last year, for the first time they have rose to the band of about $1 billion. The company has set a goal to push it up to $1.2 billion this year.

The aim is to double our global market share by 2023, and become one of the top five cargo companies in the world, Aycı said. He revealed that this May the number of THY passengers increased by 6.7 percent, especially on international flights, while cargo traffic surged by almost 33 percent.

"We have begun to improve the figures and the number of passengers again. This year our aim is to take that number from 62.7 million to 69 million," he added.

"For this, we will strive and work with all-out efforts. We have never lowered our visions. We know very well what our aims are. We play an important role in the Turkish economy, tourism, and aviation." Acknowledging THY's importance in Turkish tourism and vice versa, Aycı said that they resisted last year's decline in tourism by making a steady maneuver towards "increasing the number of transit passengers to make Istanbul even more prominent as a transit hub.

THY carried 21 million transit passengers and grew by 15 percent in the transit market. It started getting passengers from other companies in the whole region, he said. "It was a very important move in the sector. Last year, we increased the number of passengers by 2.7 percent despite all the difficulties. We increased this figure by more than 1.5 million last year and carried 62.7 million passengers despite everything," said Aycı, adding that from this perspective, THY expanded its market share in the world to 1.9 percent.