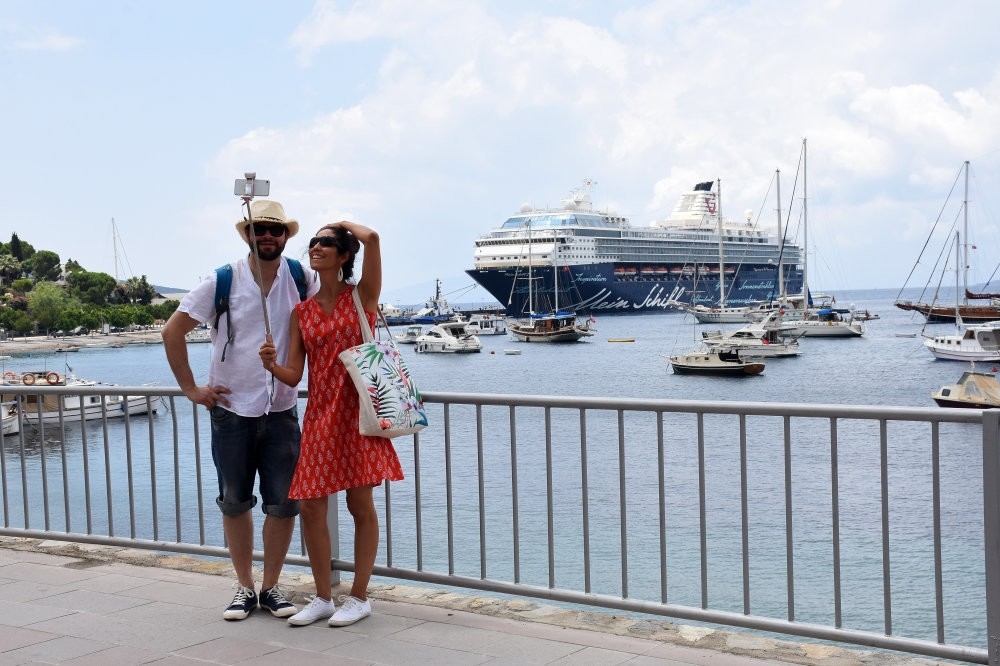 Germany's removal of economic measures imposed on Turkey and its mitigation of the travel warning against the country has been welcomed by the Turkish tourism sector.

As relations with Germany are getting normalized, tourism professionals expect that the overall target of 40 million tourists this year will be achieved with major contribution of rising number of German tourists expected to reach 7.5 million.

Germany has lifted the restriction on export and investment guarantees for German companies doing business with Turkey, while it has also appeased its travel warning against the country, reports said on July 21.

Saying that the implications of these decisions might not be seen soon, Ayık stated that positive developments would be felt as of next month.

Touching on the good pace of tourism at the moment, he noted that the total number of foreign tourists is 30 percent higher than it was last year. Stressing that Germany is one of the biggest resource share for the Turkish tourism sector, Ayık said, "We will see the reflection of this in the coming days as statements by Germany are toned down."

Germany had issued a warning to its citizens visiting Turkey last July, telling them to take "heightened caution."

In a reciprocal move in September last year, the Foreign Ministry warned Turkish citizens living in or traveling Germany to be cautious. The ministry said Turkish citizens should act responsibly in cases of xenophobia, incidents of racism and verbal attacks.

Despite the tightened travel instructions of the German Foreign Affairs Ministry, Turkey has remained a popular holiday destination for German citizens.

Turkey hosted the highest number of German tourists in 2015 with 5.6 million visiting that year. Ayık noted that unfortunately this figure declined to 2.5 million the following year.

DEVELOPMENTS TO RAISE BAR IN TOURISM

After Turkish tourism peaked in 2014, it declined because of adverse incidents in 2015 and 2016 and started recovering last year, Pera Center Hotel Chairman Cihan Ellialtıoğlu said.

Highlighting that tourism professionals regard 2018 as a year

of recovery and boom, Ellialtıoğlu noted that a total of 11.8 million tourists visited Turkey in the first five months of the year – which points to a record.

He expressed that the Turkish tourism sector aims to attract 40 million tourists and gain $32 billion in tourism revenue in 2018.

Stressing that certain developments will make major positive contributions, Ellialtıoğlu said, "First the normalization of relations with the Netherlands and then Germany's alleviation of travel warning against Turkey will raise the bar in tourism. I believe that, with the impact of these developments, 40 million tourists will be reached in 2018 and that this figure may even be exceeded."

Turkey and the Netherlands have decided to normalize bilateral relations and have restored full formal diplomatic ties, the Turkish Foreign Ministry said Friday.

The decision was reached in a phone call between Foreign Minister Mevlüt Çavuşoğlu and his Dutch counterpart Stef Blok following the latter's letter, the statement said.

A diplomatic row between the NATO allies broke out in March 2017, when the Netherlands barred government ministers from campaigning among the Turkish diaspora in the Netherlands.

He underlined that Taksim's attraction has been restored with the completion of the renovation on İstiklal Avenue, saying that the occupancy rate of hotels is at 95 percent and above until October and that they have started receiving bookings for December.

Emphasizing that Culture and Tourism Minister Mehmet Ersoy was from the tourism sector himself and acknowledges the problems of the sector, Ellialtıoğlu stated that, thanks to this, problems in the tourism sector would be easily overcome and international tourism relations would be moved much further. "Our minister has great vision. Thanks to this, I really think that a new era will start in tourism."

Karaderili Companies Group General Manager Tevfik Talas indicated that this will have positive impacts on both thermal and coastal tourism, noting that the Germans love Turkey much and want to come to the country in even the most difficult times.

According to Talas, the Germans prefer Turkey not only for sea, sand and sun, but also for historical, natural, cultural and health tourism. "The normalization of relations is always in favor of both countries. As the tourism community, we have already thought that Turkey does not deserve this travel warning. It is fine that it has been alleviated, but it must be removed completely," he said. He further stated that such beautiful developments will make positive contributions to the relations and citizens of the two countries and to Turkish tourism, adding, "We already have a serious increase in the number of German tourists this year, and we expect this upward trend to continue."