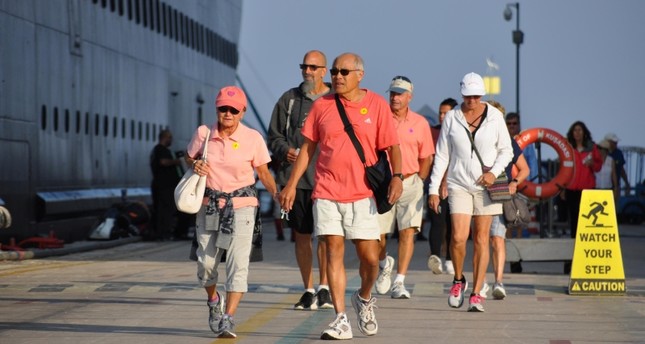 Turkey hosted some 27 million foreign visitors from January to August this year, the Ministry of Culture and Tourism announced on Friday.

Number of foreign visitors in the eight-month period recorded an annual hike of 22.9 percent, up from 21.9 million in the same period last year.

Istanbul -- one of the most popular touristic destinations in Turkey -- saw the highest number of foreign visitors with 8.87 million in the January-August period.

The Mediterranean resort city of Antalya became the second among all cities with 8.75 million visitors.

With regards to nationalities of foreign visitors over the same period, Russia was the top country with 4.18 million visitors, accounting for 15.5 percent of all foreign visitors.

Airway was the most preferred mean of transport with 20.7 million foreign visitors, while nearly 5.7 million and some 650,000 visitors used roadway/railway and seaway, respectively.

According to the official figures, 32.4 million foreigners visited Turkey last year, while the number of arriving foreigners was 25.3 million in 2016.

Share on Facebook Share on Twitter
Previous in Tourism Hot air balloon flights in Turkey will soon take place in nine other... Next in Tourism One of the world's most prominent destinations in tourism, Antalya,...
DAILY SABAH RECOMMENDS