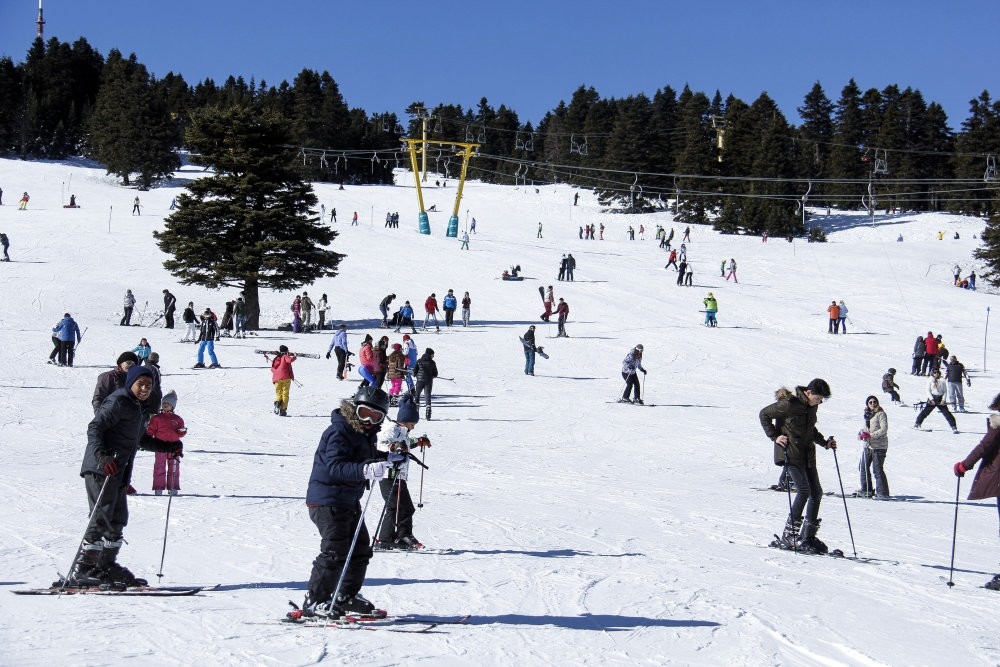 With winter season just days away, Turkey's famed Uludağ mountain is set to rise and shine and host a large number of ski-lovers from Russia

As the countdown begins for the opening of winter season, early reservations by Russian tourists promise a fruitful season at one of the most important winter tourism centers and highly popular destination for skiing enthusiasts, Uludağ.

Final preparations for the winter season at Uludağ, which is located in the northwestern province of Bursa, have been completed and hotels are scheduled to welcome their guests on Dec. 14. With 20 ski tracks reaching a total length of 300,980 meters and 18 hotels with a capacity of 6,500 beds, Uludağ is ready to welcome local and foreign guests.

Murat Saraçoğlu, the head of the Association of Turkish Travel Agencies (TÜRSAB) South Marmara Branch, stated that Bursa is one of the cities that has become an international brand with Uludağ. Recalling that there was a very high influx of Russian tourists to the famed mountain between 2011 and 2013, Saraçoğlu said projects are underway to capture that influx once again.

"This year, we have seen an increase in the number of Russian tourists. Even though the season has yet to open, we know that they made their bookings. We also heard that there have been reservations made across Turkey," Saraçoğlu said. He noted that Russia has a special interest in Turkey. "We have also seen the close relations of the statesmen increase the solidarity between the citizens of both countries. Therefore, it is very important for Russian holidaymakers to choose Antalya for summer tourism and Bursa for winter tourism."

Turkey hosted some 32 million foreign tourists in the first three quarters of this year, with a 23 percent increase, according to the Culture and Tourism Ministry.

Russia led the way among nations in the said period as around 5.12 million Russians visited Turkey, a 16.1 percent year-on-year increase. The arrivals have already passed the figures from last year, when around 4.7 million Russian tourists visited the country. Officials previously said they expect the figure to hit up to 6 million this year.

On the other hand, Saraçoğlu said Arab tourists do not have much interest in Uludağ in the winter, highlighting that they are conducting promotional activities to make Bursa attractive for Arab visitors in the colder months. "We think that Arab tourists will gradually come to Bursa not only in the summer but also in the winter. It is very important that the tourists coming to Bursa and Turkey leave good foreign exchange," Saraçoğlu said, pointing out that visits in the summer use all of Bursa's consumption resources, which contributes to the Turkish economy, while activities in the winter are limited to Uludağ, thus contributing less to the economy. Culture Tourism Minister Mehmet Ersoy has initiated the tourism activities in Uludağ, he noted, adding: "We should use this opportunity. He expressed a special interest in Uludağ in our previous discussions with him. We think that the shortcomings of Uludağ will be resolved one by one in the coming period. We think that if we could attract world-famous football teams, not just Arab tourists, in the summer, they would also support the area's promotion, as well as the use of the summer season. We will also support other projects related to tourism activities," he concluded.

Bursa Tourism Platform President Hasan Eker said that this year they expect a leap in Uludağ, underlining that Turkey is now more attractive compared to other countries due to foreign exchange.

"Our relations with Russia also have a positive reflection on our economy because of a positive approach. We think that this year, Uludağ will be the first choice of Russian tourists in this direction," Eker said. "Of course, it is predicted that snowfall will be higher this year, which is a major factor in increasing the number of tourists as well. Uludağ is rumored to have high prices; however, when compared to Antalya and other regions, we can see how affordable the prices are. The hotels we interviewed said reservations were good."

He explained that those coming to Uludağ are pleased but that there is often distress expressed on social media or in the news. "Uludağ is one of the most effective regions for congress tourism, but there are also negative aspects to the issue. It is said that Uludağ is preferred for skiing. However, many congresses are also held in Antalya. I can say that the meetings in Uludağ are more effective. Because of the cold weather and less daylight, the meetings usually have higher attendance rates," Eker added.