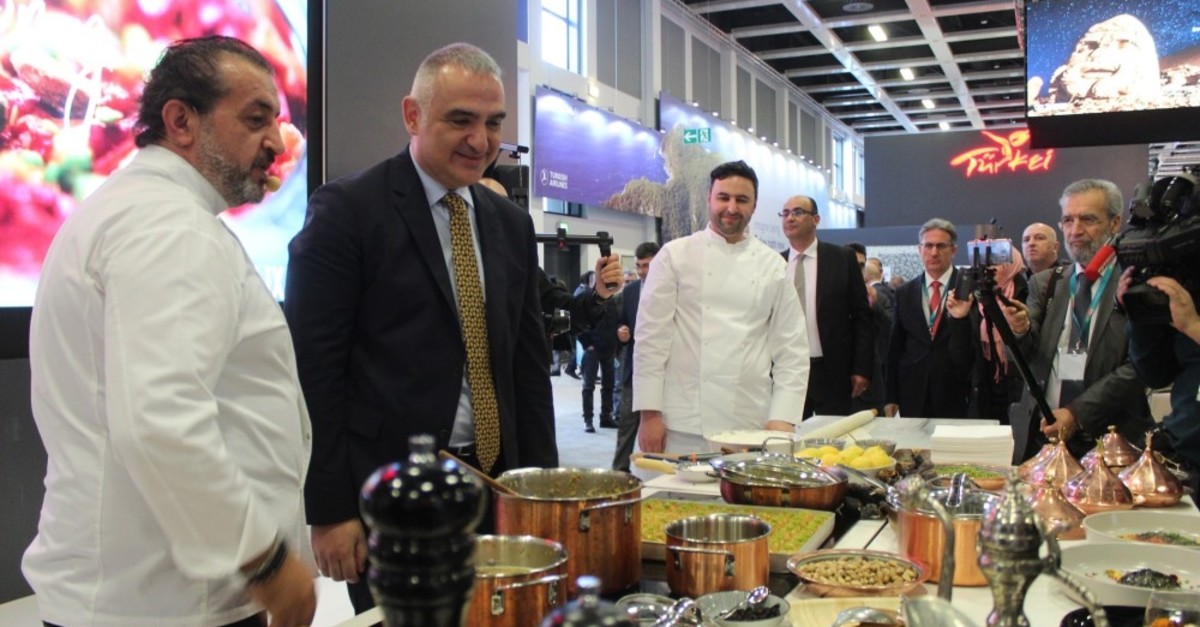 While Turkey hosted 4.5 million visitors from Germany in 2018, the figure is expected to reach 6 million this year as early bookings indicate a significant rise, said the culture and tourism minister, emphasizing that Turkey is always ready to welcome German tourists

The world's leading travel trade show ITB Berlin hosted a reception under the chairmanship of Culture and Tourism Minister Mehmet Nuri Ersoy. In his address to the reception, Minister Ersoy emphasized the significance of ITB Berlin, saying that the show is an indicator and clue regarding how the 2019 tourism season will be. Turkey achieved a significant rise in the 2018 tourism season, the minister said and continued, "We closed the 2018 season with figures above our expectations. What is even more pleasing is that our hopes for 2019 are greater. Now we are obtaining results. We came to see early booking figures in January and February."

The Turkish booth at the event, established by the Ministry of Culture and Tourism, will focus on the promotion of Göbeklitepe, located near Şanlıurfa, which is considered to be the world's oldest known temple. The show is also aimed at promoting golf centers, blue cruises, thermal health tourism and nature tourism opportunities such as biking, which is on the rise in Turkey in recent years. The Turkish booth was launched by Minister Ersoy. The exhibition will introduce products that bring together travel and technological innovations.

Recalling that slightly more than 4.5 million German tourists came to Turkey last year, Minister Ersoy remarked, "We anticipate that around 5 million to 6 million German tourists will visit Turkey this year. Now, the trend is positive. As of January this year, we have started individual promotion not only for Turkey, but for all countries from where tourists come to Turkey, including the U.K., Germany, Russia, the Netherlands, Ukraine and the Gulf countries."

Underlining that this intense promotion is directly aimed at consumers, the minister said, "As of January, we started an intense publicity campaign with Turkish Airlines in magazines and national television channels. As of April, we have initiated THY's direct scheduled flights to Antalya, Bodrum, Dalaman and Izmir airports and have put [them] into operation. There is [brand]differentiation. We are differentiating the definition of Turkey."

Antalya is being promoted at the fair not only for its sea, sand and sun, but also its sporting infrastructure, especially golf, along with its historical and cultural values. As such, the Antalya booths have attracted great interest as of the inauguration day. Antalya Governor Münir Karaloğlu played golf with industry representatives at the mini-golf range established to attract attention to golf tourism.

Recalling that they saw the best tourism season ever in both Antalya and Turkey in 2018, Karaloğlu stated that both Antalya and Turkey will break records in 2019 as well. Indicating that there is a good atmosphere at the German show, the governor noted, "ITB is the largest gathering of the tourism industry. We will achieve the best figures in the German market this year as well and go beyond the 2015 figures."Karaloğlu also visited all tourism stakeholders at the Turkish booth, wishing them a successful fair. He responded to tourism professionals' requests to take photos, saying that they have been supporting tourism as much as they can and that they would continue to support it.

Highlighting that Turkey's tourism targets have grown in line with the 2023 vision goals as a result of the success achieved in 2018, Karaloğlu iterated that the objective is to attract 70 million tourists and $70 billion in tourism revenue. Karaloğlu further remarked that Antalya plays a major role in helping Turkey achieve its goals, adding that the Berlin show is a significant stage to enable Antalya to further flourish in tourism.

To be held from March 6 to 10, ITB Berlin hosts 11,000 participants from 181 countries, including Turkey. Turkey is attending the fair with more than 200 hotels, tour operators, travel agencies and associations and organizations operating in the tourism industry.

At the show, Antalya is represented by Provincial Director of Culture and Tourism İbrahim Acar, Antalya Chamber of Commerce and Industry (ATSO) Chairman Davut Çetin, Association of Mediterranean Tourist Hoteliers and Operators (AKTOB) Chairman Erhan Yağcı and any tourism industry professionals at the helm of Antalya Governor Münir Karaloğlu.

This year, Malaysia is the host country of ITB Berlin, which brings together over 10,000 tourism professionals from 186 regions and countries. The official opening of the show was carried out by German Economy Minister Peter Altmaier and Malaysian Tourism Minister Datuk Mohamaddin bin Ketapi.